In the blazing heat of the Bugaz Spit, a finger of land by the Black Sea, for whole nine days kiteboarders, including professional athletes, had been struggling to get a Beeline Cup in freestyle, course racing and jibbing events. An ad hoc jib park, one of the largest in Europe and featuring six sliders, had been built for the BeeCamp/Rail Masters Contest. Here are the best 2014 athletes of the Beeline Cup: Sergei Borisov, a Russian national, ranked highest in freestyle; Igor Lezginov, a Russian national, the first in course racing; Eric Rienstra, a US national, number one in jibbing.
5. 9. 2014 Comments: 0

It was the first time that young athletes were allowed to compete in a Russian kiteboarding challenge. All the 10 athletes from the ‘under 18’ group were recognized as the best 2014 athletes and were presented with Beeline Smart2 smartphones and four-month pre-paid subscriber contracts. 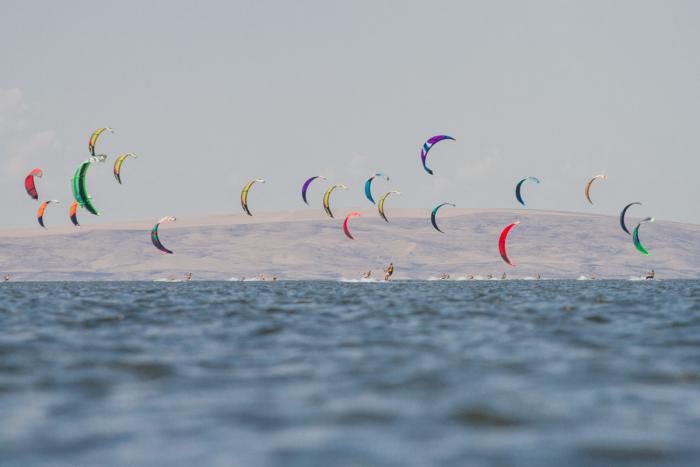 A large music marathon was held August 23rd and marked the climax of the festival, having gathered fans of modern electronic music from across Russia. Throughout the day, the big music stage of the Bugaz Spit and the attendees warmly welcomed Hot Chip (one of the most popular pop bands of our days), Paid (a London duet), New Flash (a popular rap gang), PROXY (the most popular Russian performer in the West), On-The-Go (an indie-pop quintet), Tesla Boy (so adored by the audience), DJ Pirumov & DJ Tactics (an amazing duet), Mystic Bo (a reggae/hip-hop guru) with the Jamaican singer Vido Jelashe, and DUBRAW! DJz (MIKE P & JAHSTEEZ, two popular DJs from Krasnodar).

“Seven years since its inception, BeeCamp has changed beyond recognition. From being a small closed fellowship for kite surfers it grew into something really sought after by many people. Latest e-music, bright kites, tasty street food from chefs of popular eateries and kite canopies is what BeeCamp is today. We are sure that regular visitors will be growing in numbers in the coming years due to the peculiar atmosphere of the festival,” stated Tatyana Korneva, VimpelCom’s Integrated Communications Chief.

Exclusively for BeeCamp guests who actively use the whole range of modern telecom services, Beeline coverage on the Bugaz Spit and the surrounding area had been further improved. During the festival visitors actively communicated and shared their impressions, using mobile Internet twice more often and talking with their friends and relatives 5 times more as compared to an ordinary day. More than 5,000 photos taken on site were posted on social networks during the festival.

Just like in all previous years, the Bugaz Spit became a real home for all fans of water sports activities and modern music again. BeeCamp offered its guests a lot: daily beach parties, welcoming campsite, different beach games, interactive zones, a yoga school, seasonal dish cafés and a kite festival. Guests looking for active recreation were offered basic kiteboarding training by Russia’s best instructors at the kiteboarding school BeeKiteSchool over all nine days of the festival.

See you next year!

For more information about the festival please go to: