Greg Roe, a Canadian Trampolinist and extreme acrobat Adrex.com has written about appeared on the popular TV show 'Das Supertalent', the German version of popular TV reality show, made famous by Simon Cowell’s America’s Got Talent. With audience just over 9 million viewers, there seems no better way to display one's skills. However, Greg wants not only to showcase his talent but to present the world of acrobatic to wider audience and promote series of Freedrop events (freedropping is the latest sport taking the event world by storm ) being held throughout Europe. Let's give him that chance.
27. 11. 2014 Comments: 0

Roe showcased his unique talent to the panel of judges and live audience this past Saturday, with the hopes of showing people a close up view of what it’s like to flip and drop from extreme heights at high speeds. His innate spatial awareness gives him the uncanny ability to always know where his body is in the air, in relation to the ground and the airbag.

Roe, an extreme athlete who has taken his unique skills to new heights, has also embarked on a
Freedropping™ world tour. Performing never before seen flips and tricks from heights in excess of 50
meters, Roe has recently performed a never before seen stunt -- a triple flip from 55 meters which was recently promoted through YouTube and BAGJUMP™. The video can be seen here 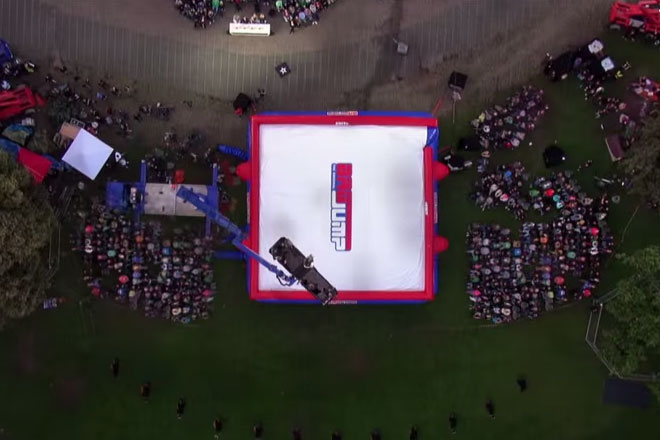 Rapidly growing worldwide, the popularity of this thrilling 'daredevil' trend has continued to grow across Europe. Both athleticism and a top-level of fitness are required to achieve the highest degree of difficulty, while plummeting from heights in excess of 50 meters into a giant safety airbag. Roe’s new partnership with BAGJUMP™ as part of their 'Extreme Freedrop® Team' will take the sport to new heights by performing at festivals and shows across Europe. Roe hopes to go higher and will challenge himself to perform a bigger skill at his next event. With his sights set on breaking his own record, we can't wait to see more. Stay tuned!