The year was 1996 when a competition team called Arizona Airspeed attempted what no other team had ever accomplished: winning both the 4-way and 8-way events at a World Meet. Success came quickly, as the Team began bringing home gold medals and winning in both, the 4-way as well as the 8-way events. It was great time and especially battles against Golden Knights, another world-class team, or the Russians, who dominated the relatively new sport of skydiving back then were and still are memorable today. A lot of water has flowed under the bridge since then but the winning spirit of the current U.S. 4-way FS National Team still persist to this day. It's year 2015 and Airspeed is once again focusing on the 4-way event.....
18. 9. 2015 Comments: 0

Arizona Airspeed began in 1994 when Jack Jefferies, Mark Kirkby, Kirk Verner, Dan BC and John Lemming joined forces with Larry and Lil Hill of Skydive Arizona to start a new professional 4-way skydiving team. The team went on to dominate the 4-way event in every National and World skydiving competition for 5 years in a row. Being also successful in the 8-way competitions in years to come, Airspeed soon gained recognition of a world-class team hard to beat: they have won the 4-way event at every U.S. Nationals since 2007 and has been the U.S. Team for that entire span of time also. Beginning in 2015, Airspeed consists of Niklas Hemlin, Thomas Hughes, Chris Farina and Thiago Gomes with Justin Price flying camera and we got in touch with U.S. Skydiving Champion Chris Farina to talk about not only team's hopes but comradeship along the way.

Chris, how did you get into skydiving? And how one gets into the competitive side of the sport?

I started skydiving on a whim with a friend in 1995 and fell in love from the start.  With about 500 jumps in 1999 I was getting bored and was looking for something more.  I was introduced to competitive 4-way formation skydiving and the passion was reignited.  From that point, I began training as much as I could afford in time and money.  Eventually that training paid off and I was offered a tryout in 2004 with Arizona Airspeed but unfortunately did not make the team.  That, however, planted the seed that I could one day join a full-time competition team.  In late 2005, I was offered a tryout for a newly formed team Perris Fury.  Fury had a great deal of success over my 7 years on the team but we never were able to reach the top in the U.S.  I then spent one year on SDC Rhythm and again placed second to Arizona Airspeed at the U.S. Nationals.  Finally at the end of 2012 I was again given the opportunity to try out for Arizona Airspeed and this time, I was offered a slot on the team. Obviously, your aim is to win a World Championships in 4-way, how it's going? How do you prepare, how many hours do you spent in the skies?

My personal goal has always been to win a World Championship in 4-way.  After winning the U.S. Nationals with Arizona Airspeed in 2013 we became the U.S. Team.  However, we came up a little short in 2014 at the World Championships in the Czech Republic finishing 2nd to the Belgian National Team.  We are now training hard to win the 2015 U.S. Nationals to once again become the U.S. Team and represent the U.S. at the World Championships in September 2016 in Chicago.  I’m extremely optimistic about this new lineup and our chances at this year’s U.S. Nationals and next year’s World Championships.  The team trains between 600-700 jumps per year and 20-30 hours of wind tunnel training.  Besides training all of Airspeed’s members make their livings as full-time skydiving coaches, so we live and breathe competitive skydiving on a daily basis.  As professional athletes we also place a great deal of attention on our diets and exercise routines. 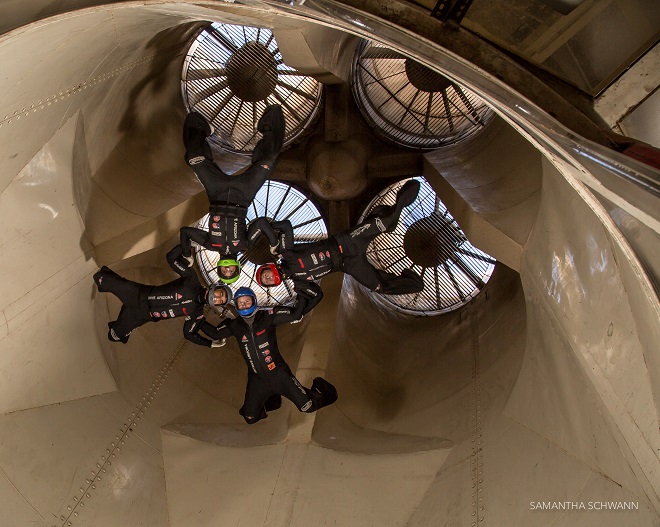 You are a relatively young team, how long have you known each other?

Four of the current members have been on the team together since 2013 and Niklas (Hemlin) was originally on the team in 2011 and 2012 and was the team’s alternate for 2013 and 2014.  In its current form this lineup has only been training together since December 2014 but has come together very quickly and performing at a world class level already.  Beyond that, because of how small the competitive skydiving world is, we have all know each other for 10-15 years and competed against each other with other teams.  When I joined Airspeed in 2013, I had been previously coached by all of the other members at one time or another in my competitive skydiving career. What has been your biggest success so far with the team?

Personally, my biggest success was after competing full-time since 2006, was to win the U.S. Nationals for the first time in 2013 and becoming the U.S. Team to represent the U.S. at the 2014 World Championships.  Attending my first World Championships in 2014 and placing second was also very memorable. 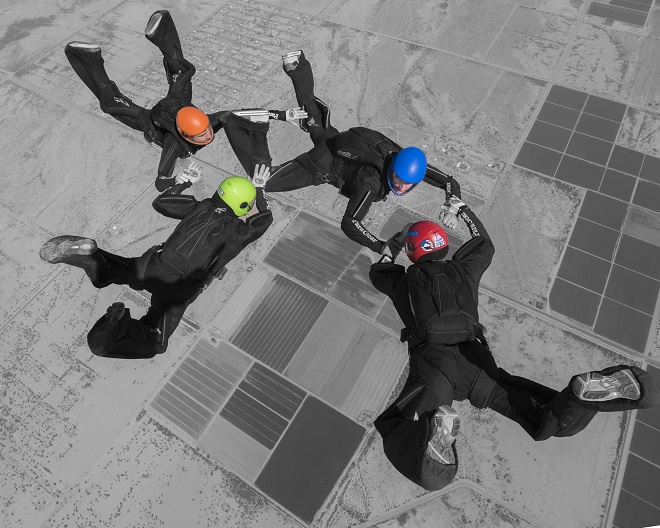 Arizona Airspeed has been running tunnel camps since the first realistic skydiving wind tunnel was opened in Orlando, in the late 90's, and they seem to be quite successful. What do you think make your camps stand out from others? Can you already reveal camp dates?

I believe our success with tunnel camps early on was being one of the first professional teams to offer those types of camps and using them to innovate the transfer of knowledge to up and coming competitors.  These days out tunnel camps focus on a format known as 2on2.  This is where two camp participants are paired with two current Airspeed members and they receive the benefit of flying a 4-way with two of them and two of us.  This format is one of the fastest ways for individuals to increase the skill and knowledge in 4-way competitive skydiving through feeling and seeing our techniques first hand.  There are not many other opportunities to fly with and learn from some of the best coaches and competitors in the world. 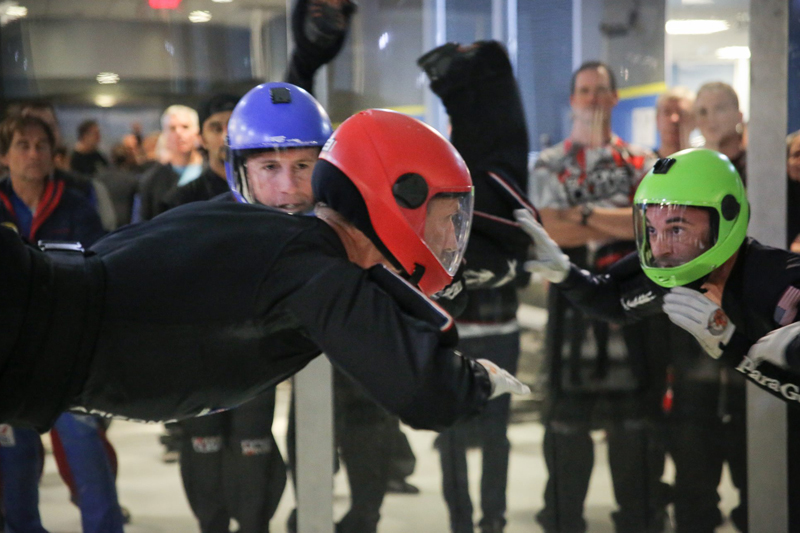 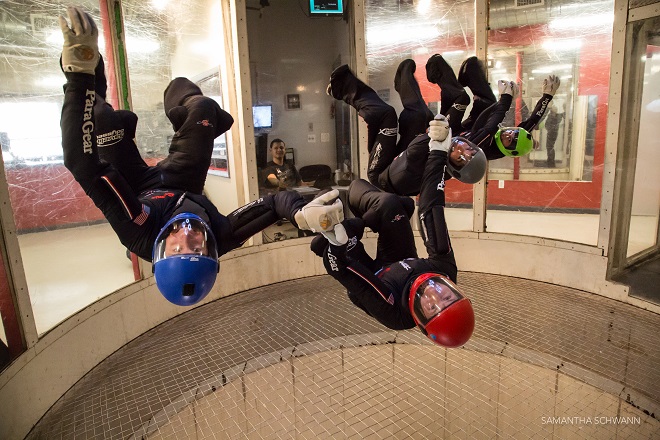 Your home turf is Skydive Arizona. Apart from competitive skydiving, where else do you jump?

Unfortunately, with how busy our training and competition schedule is, I don’t do many additional skydives outside of training and coaching. However, that is hardly a complaint, since becoming a professional competitor and coach I have had the opportunity to compete and coach all around the world including all over the U.S., England, Spain, Canada, Singapore and Dubai to just name a few. 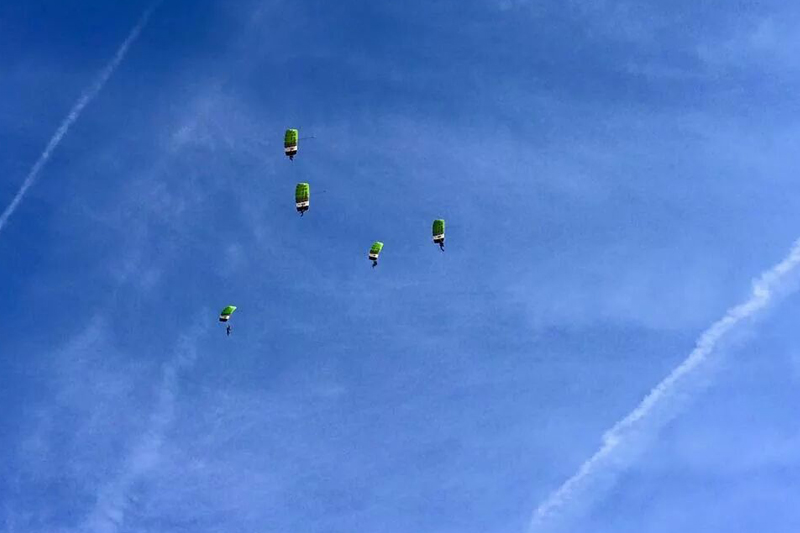 Where do you think will skydiving yet to take you?

That's a tough question because we are so focused on Nationals in late October 2015 and then we will be looking to the World Championships in September 2016.  In the short-term, it will take me not far from home because the U.S. Nationals are at our home dropzone, Skydive Arizona.  In mid-November we will be representing the U.S. at the Clash of Champions tunnel competition and the World Air Games both in Dubai.  Assuming we win the U.S. Nationals in October, the team will then get back to training hard for the World Championships in January 2016.  Long-term, I’m not really sure, but I’m confident I will be associated with Arizona Airspeed for at least a few more years to come. 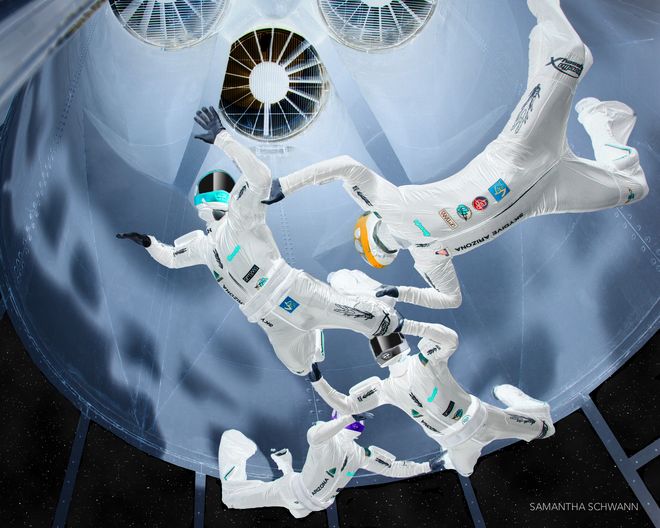 Most would assume this moment would involve winning some competition but that’s not really the case.  Since Airspeed chose to focus on 4-way exclusively, we have been bringing back former members of the team to join us for the 8-way event at the U.S. Nationals.  My first opportunity for this experience was in 2013.  Dan Brodsky-Chenfeld and Jack Jeffries, two of the original members of Arizona Airspeed, joined us for 8-way at Nationals.  The opportunity to compete with two of the original members and two of my skydiving mentors will be something that stays with me for the rest of my life.