Ellen Brennan is one of the few women who got hooked on wingsuit basejumping. Being introduced to the world of flying at the young age, she has developed strong liking towards it and never stopped ever since. She is now recognized as the world's fastest flying women and gets invitations from the world's biggest wingsuit events. Adrex.com hooked up with Ellen to talk about the world of competitions, her best moments as well as why she had to wait one whole year to push for a jump. Enjoy!
31. 7. 2014 Comments: 0

1.Hi Ellen. To break the ice, tell our readers what have you been up to lately.
These last few weeks have been quite busy for me. I spent the beginning of this month training in California for the Red Bull Aces wingsuit race. (I’m not used to jumping from airplanes so I needed to do some warming up :) )  Then directly after that competition, I flew to my home airport in Geneva, had 4 hours to exchange skydiving gear for my BASE jumping gear and then I was off to China to scout out a new race course for this year’s WWL China Grand Prix 2014.

2.You also climb. How did you get to BASE jumping and wingsuit flying?
My sporty career actually started with jumping. I did a lot of jumping in Moab Utah, which is a magnificent area littered with vertical cliffs that provide challenging climbing routes and scenic BASE jumps. After jumping there for about a year I wanted to do that jumps that were only reachable by climbing. Particularly in the fisher tower area. Wingsuiting came about around the same time as my climbing started. I initially became interested in wingsuiting for safety reasons. I realized that a wingsuit was a great tool to transport me away from the cliff for pull time. 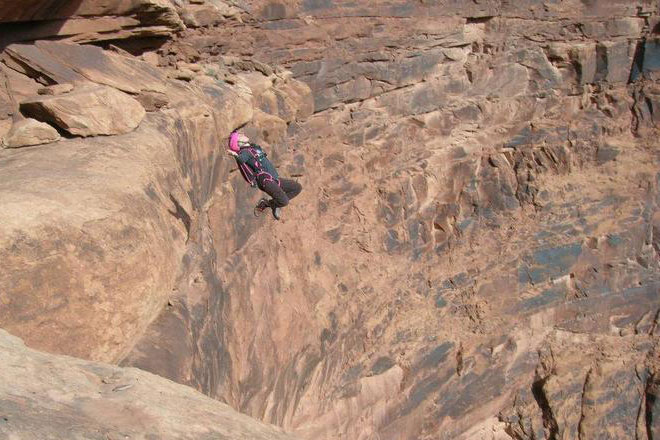 3.What is the most rewarded moment for you as a wingsuit pilot, winning a competition, being able to travel or just having a good time?
My most rewarding moments in jumping have been when I have successfully jumped from a difficult to reach or challenging cliff. The jump that sticks out most is called Le Pleureur located near Verbier in Switzerland. It is a 2000m jump with a 2000m hike exiting at 3710m. I had attempted this jump in 2012 but had a difficult time navigating the approach. Once we realized that we were off course we didn’t have enough sunlight to continue to push for the jump. We had to wait another year before we had the chance to do the jump again. After 5 hours of hiking in one of the most beautiful places on this planet we arrived at the top. Perfect conditions for jumping. I had a beautiful flight down, we landed near a bar at the bottom and enjoyed a refreshing beer while looking up at the mountain we had just flown down. (Editors: check out Ellen's video from the location)

4.You are recognized as the world's fastest flying women and the only female to compete in WWL. What motivates you? How and where do you train?
I am normally not a competitive person. I actually got into jumping because I viewed it as a personal sport, no competition, no teammates relying on me. But the best way to improve one’s skills is through competition. I feel so lucky that I am in a sport where the wingsuit races are not purely competition but also a time for athletes to learn, teach and push the limits. The competitors help each other out, giving advice to one another and critiquing each other’s jumps. Yes we are competitors with the goal to be on the podium, but we are also a family and we watch out for one another. 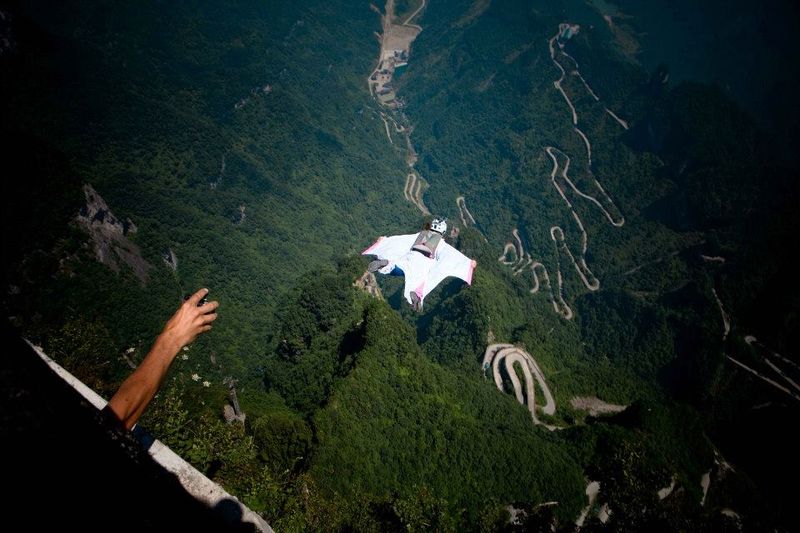 6.What do you when you are not in the air? Do you do any other extreme sports?
If I am not jumping, I like to relax by taking a paraglider flight. It gives me a good chance to be in a quiet place with just me and the air and time to think, analyze and decompress. If I am not in the air I love spending time with my dog. Taking her hiking – especially if the hike takes us up to the snow. Watching her run- dive- and belly flop into a spectacular side several meters down snow patch slope puts smiles on both of our faces. 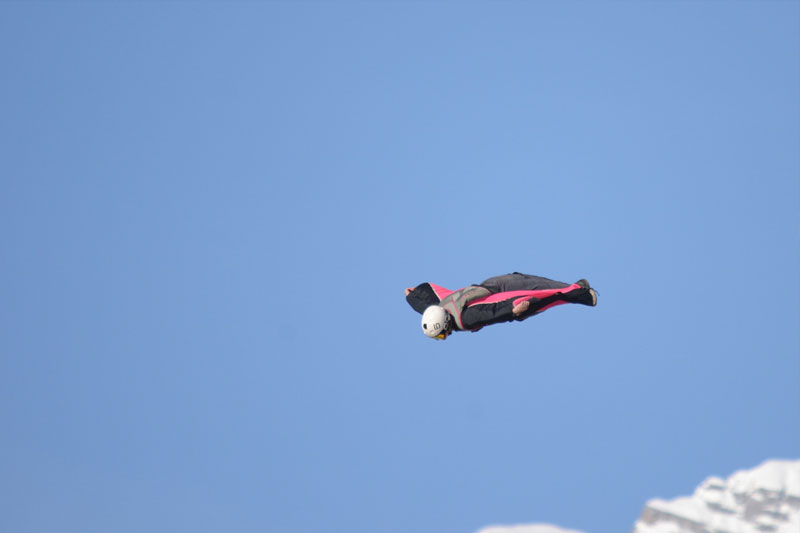 7.Do you have any ritual before a competition?
Typically I try to relax. If I think too hard about racing and trying to go fast I always go slow. So I put myself in the „we are here making fun jumps“ mind set. So typically that involves lots of dancing and sometimes singing. I also make sure I eat a nice healthy light breakfast before the comp so I have the proper fuel to get me through the day.

8.Was there ever a moment in your "flying" career you wanted to quit on account of an injury, horrifying moment etc.?
I can’t say that I’ve ever wanted to quit, but recently I lost a few friends and the desire to jump completely left me... for many weeks. It is hard for me to lose friends doing the same sports that I enjoy doing. We all try to tell ourselves- they messed up, I would never do that. But if we are honest with ourselves, we have all messed up. We have all made bad decisions. And we have all been lucky. In my eyes there are 2 groups of BASE jumpers, the ones who wipe off their mistakes and don’t think twice about it and the ones who learn from those mistakes. At the moment, I don’t see myself ever quitting this sport, but I do see myself changing the way I practice it. 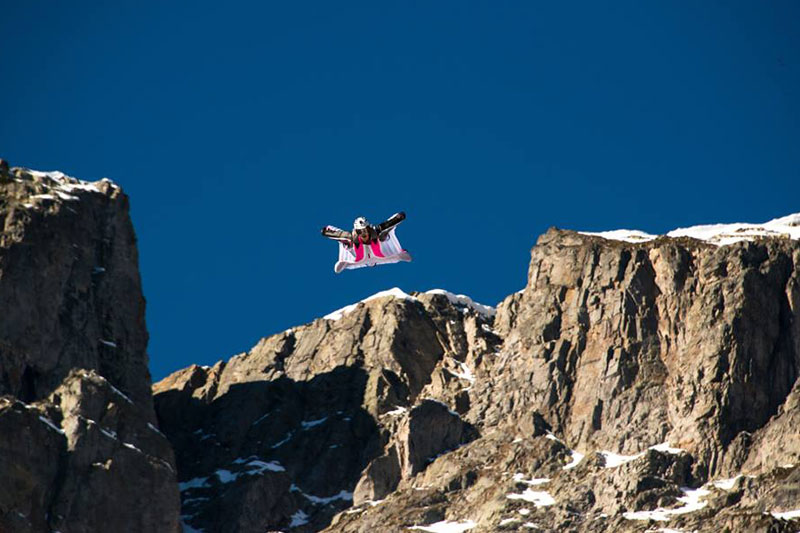 9.Some men can't cope with the fact that some women are better than men when it comes to sport. Have you ever had that feeling of envy towards you?
Oh boy.... Unfortunately yes. Not necessarily envy but the feelings that certain men don’t like it when girls are in a „strong“ position. A man‘s ego is a strong monster. The most challenging thing for me is when I see a jumper with less experience than me, I offer him advice and he blatantly disregards it because it‘s coming from a female.  I understand that society has taught us the men are supposed to be the big strong adventurous ones while the girls are supposed be pretty packing weights and drive the shuttle, but girls suck at driving.  Girls are also great at evening out the group. Amongst a group of jumpers, a female is typically less susceptible to falling into the ‚herd mentality‘ which in return offers an assessment of the jump more on the conservative side. I try not to let the ego driven jumpers get to me. In my opinion, if a person’s jumping is motivated by their ego they are more likely to get hurt or die. Ego can be a very scary and powerful driving factor.

10.Many athletes have various side projects that usually go hand in hand with their sports. Have you started something up or are you thinking about it?
I do have a few projects I’m working on, some involve high mountains, other involve remote, never before jumped areas. Soon to come. 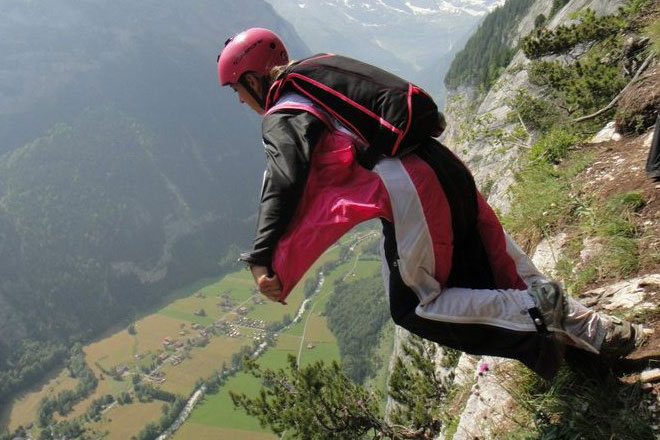 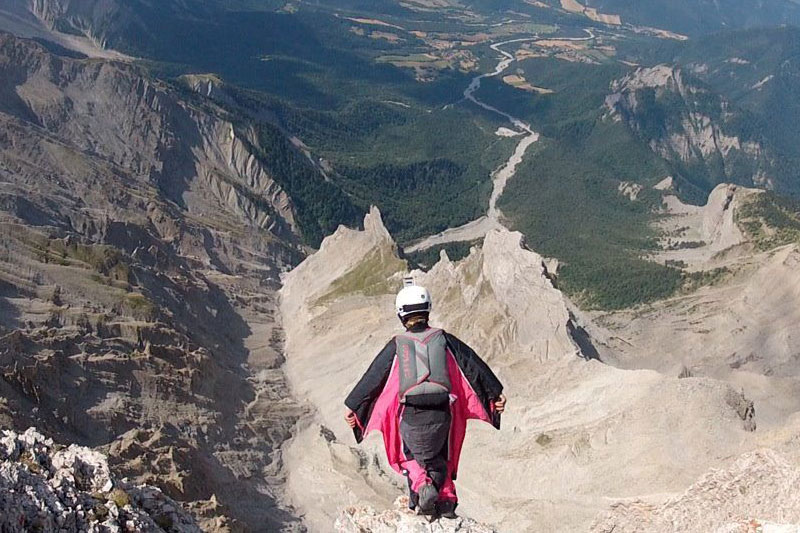 11.You have been wingsuiting in the Chamonix valley all season (Ellen currently resides in France), what was the best jump you enjoyed the most?
My favorite jump in the Chamonix area is Aiguille de l’M. It is on the Aiguille du Midi side of the valley and requires some hiking, via ferrata and climbing to reach the exit. The flight is probably around 1400m all the way down to the Chamonix town. I love this jump mostly for the approach. It is not too technical, but does require a basic mountain skill set.

12.What was the best place you have been to so far? And why? Which part of the World would you still like to visit?
I love the Dolomites, that place is full of magic. And I know I have only brushed the surface there. I would love to go explore there some more and find some more big jumps.

On my wish list- sooo many places. Numerous areas in Canada, I could spend a few seasons up there before I finished everything I want to do. Antarctica sounds like an amazing adventure. Numerous places in Africa, Brazil, Russia...

13.Who do you jump with most of the time? Who is/was your influence?
I jump mostly with my boyfriend, Lau. But there is a group of local frenchies who I spend my time with. And during the summer we have lots of our friends come to visit from the US so we jump a lot with them also.

I have many influences. Douggs has always influenced me to never underestimate myself, and also play it safe. Matt Gerdes has opened my eyes to all the possibilities in this world. And more recently Roch, a local frenchie has helped open my eyes to alpine jumping.

But above all, my dad has been my biggest influence. He has taught me to do what makes me happy.  I think happiness is the most importing thing in life. 14.The event you look forward the most in 2014?
The Red Bull Aces race was out of this world! Great concept, safe, fun, challenging, I learned a lot there. Now I am preparing for the WWL China Grand Prix, which is going to be the ultimate test of a winsuit base jumper. The first course will be testing steep flying and turning skills, and the second course will be testing efficient glide while maintaining high speed.

15.What would you still like to achieve?
I really look forward to doing some jumping expeditions in remote areas of the world. 16.The craziest thing you have ever done? It doesn't have to be necessarily associated with flying though:)
After climbing Caselton Towner in Moab UT with Douggs and Jamie Flynn, we hung out on top to wait for the wind to calm down. After an hour or 2, the distant stormy clouds closed in on us and we found ourselves on the top on a needle in the middle of a flat desert with out hair sticking up, zingy noise bouncing between metal objects and lightening striking everywhere. We put on our rigs thinking that if we did get struck by lightening, we could possibly escape by jumping off- last ditch effort. We eventually were able to rappel down some fixed ropes put up there by a camera crew filming a project, but that was for sure the most craziest moment of my life.

We wish Ellen all the best; no injuries, having fun and more wingsuit titles in the future!