Prague/Yosemite – November 22, 2016 – At 12:30 CET this morning, Adam Ondra finished his successful climb at Dawn Wall, one of the most difficult multi-pitch routes in the world. It was only the second big-wall all free climb worldwide. With his fellow…
28. 4. 2017 Comments: 0

Prague/Yosemite – November 22, 2016 – At 12:30 CET this morning, Adam Ondra finished his successful climb at Dawn Wall, one of the most difficult multi-pitch routes in the world. It was only the second big-wall all free climb worldwide. With his fellow climber Pavel Blažek, they spent, in total, 8 days on the wall. By this feat, Adam made it 11 days faster than the first and so far the only climb finished on this wall, pushing limits further again. Two months after his victory in Lead Climbing in the Climbing World Championships, Adam achieves another success.

He and his belayer Pavel Blažek entered Dawn Wall, a nearly one kilometre long 90-degrees vertical wall of El Capitan in Yosemite National Park and probably the most difficult big wall in the world, on Monday night, 2:46 AM local time. 8 days later, on Monday, November 21, 3:30 PM local time, he had reached the end of the route, finishing only the second all free climb of this route ever. Considering the fact that he is a bit of a newbie on big walls and this was his first time in Yosemite, the speed of his advance was seen as stunning by climbing community.

"It‘s like Christmas. As soon as we reached the first tree up there, it began snowing and then it was for sure that my dream came true. Perfect timing, indeed," depicted Adam emotively shortly after he finished the climb.

The entire climb was a so called single push, where there is no interruption to the climbing except the essential sleep in a portaledge right on the wall. All free climb means that any anchoring equipment, such as rope, chocks, pitons, are used only passively, i.e. to secure the climbers from fall, not to help them climb up. “You can only climb up using your own physical power, natural boulders and surface protrusions on the rock,” Adam Ondra explained in an earlier report. Among climbers, this style is considered cleaner and more valuable, as in climbing, as well as in a lot of other sports, it is not important only to manage to do something, but above all the way you use to do it. This is different from so called technical climbing, where anchoring tools are also used for ascending. 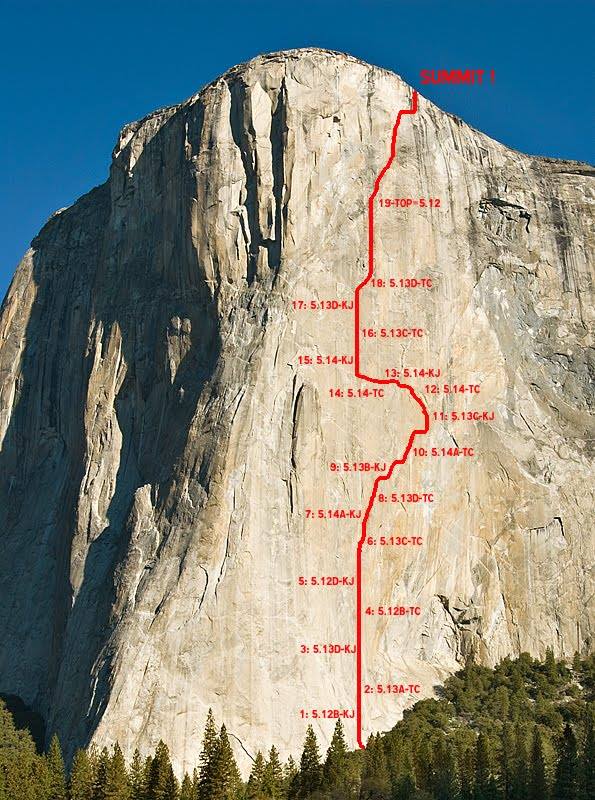 Adam Ondra started the climb swiftly, beating 13 out of total 32 pitches in the first two days. Due to high temperatures, he climbed mostly at night those days. After a day of rest in his portaledge, when heat was replaced by snow and poor weather, the most difficult and the most unlucky pitch was to be climbed on the fourth day. Pitch 14 proved to be the only problematic part in the otherwise flawless ascend. After seven failed attempts, Adam had to finish for that day and hope the following day brighter times would come. At the end of Day 4, he said: “I did a terrible job today. I’ve been too nervous, feeling under too much pressure. I failed seven attempts to get over a place I had never considered difficult before.”

Yet on the following day, he was fit and ready again, quickly beating both hardest parts of the entire route, Pitches 14 and 15. On Day 6, he managed to get over the complicated 16th and 5 more pitches. As Adam considered the remaining 11 pitches non-problematic, insiders had known by then success was the only possible expected result. However, due to a pessimistic weather forecast, Adam decided to end the splendidly opened day earlier and get back to the hanging base camp. The whole Day 7 was then sacrificed for safety‘s sake, giving Adam and Pavel time to get some rest. It was as if the rock wanted to enjoy their presence for one more night.

Though the rain had not ceased by Monday morning, Adam was determined to complete the ascend. Quickly, in continuously improving weather, he reported to have completed 7 pitches in less than 5 hours, with only 5 left to reach the end of the route. Less than 3 hours later, he stood on the top, celebrating an amazing climbing milestone.

What‘s the value of Adam‘s attempt?

Dawn Wall is considered the hardest big wall climb in the world. It hadn‘t been AF-climbed until January 2015. The first successful attempt is considered a turning point in climbing history. Tommy Caldwell and Kevin Jorgesen managed to climb the wall in 19 days, deserving not less than personal congrats from president Obama and getting in the spotlight of the mainstream media. Adam Ondra, believed to be the world‘s Number 1 climber is now the second one to attempt this climb. Adam Ondra, considered one of the top climbers worldwide, is only the second to all-free climb this route, moreover in such a short time of 8 days. By this feat, he pushed forward the frontiers of human limits again.

The rock and the route can be viewed in a NYTimes.com 3D scheme.

What is All Free climb?

In climbing, as well as in other sports, it is not only important to achieve something, but also the way HOW the goal is achieved. Adam Ondra uses the style combining single push and all free climb. This is what it means:

1) Single push. Once Adam enters the wall for real, he never leaves the wall. This means that even sleeping takes place in the wall, in hanging tents, so called portaledges. This is why Adam and his assistant climber Pavel brought enough food and water to the wall, to set up a base camp.

2) All free climb means that any anchoring equipment, such as rope, chocks, pitons, are used only passively, i.e. to secure the climbers from fall, not to help them climb up. “You can only climb up using your own physical power, natural boulders and surface protrusions on the rock,” explains Adam. This is the difference from so called technical climbing, where anchoring tools are also used for climbing up.

Uninterrupted stay on the wall is not only physically, but also mentally demanding. The base camp is approximately half way the wall, with over 400 meters of sheer rock side underneath. Both Adam and his belayer Pavel said that the stay in the height exhausted them as there is no space for mistakes and it is absolutely necessary not to lose concentration for even the slightest moment. They slept, rested and cooked in their hanging tents in the wall. Though they had brought the food and water to the wall in advance, their diet was simple – porridge, dried fruit, energy bars, instant version of mashed potatoes for dinner.

To get from and back to the base camp, they used special mechanical equipment. This is called jumaring or jugging.

In short, it is a special kind of moving using two mechanical tools which move up the rope while the climbers use their own weight. Adam demonstrates jumaring in this video.

A Czech climber, nowadays considered the best climber in the world. He first ranked among top world‘s climbers at the age of 12 and has not left the elite since. 2009 was the first year he could compete in the Adults category. Since then, Adam has won a lot of significant prizes (the most significant ones are listed below). Besides climbing competitions, he also does sport climbing on rocks, where he as recently been focusing on climbs of the highest difficulty grades. Among them we can find route Change in cave Flatanger (9b+), built by Adam himself, La Dura Dura (9b+), La Capella in Siurana in Spain (9b), Caxiraxi in Oliana (9b) – all these routes were first completed by Adam. This autumn, he went to the big walls in American Yosemite for the first time in his life, completing a successful ascend on Dawn Wall in stunning time of only 8 days. In addition to his climbing activities and achievements, Adam has managed to graduate at a college, getting a bachelor‘s degree at economics and management.

Pavel Blažek is a leisure time mountaineer and businessman, but also a traveller, adventurer, photographer, and skilled organizer. In different lifetime phases he focuses on different things, depending on what he finds the most meaningful and appealing at the moment. He has been climbing since the age of 15. He spent a few years living in Colorado, USA, where he went to the Rocky Mountains to stay there any time he didn‘t have any work duties. In 2010, he and Václav Sůra completed a successful crossing of 700 km long frozen Lake Baikal in Siberia. He was a chief photographer at expedition Gulag 2013, mapping deserted Gulag camps. Pavel took panoramic photographs of the camps which were later used as basic material for virtual museum Gulag Online. He also designs websites, does graphic arts and manages his company focusing manufacturing and rental of special stands which he invented and also used to make on his own for a long time. He first met Adam at a meeting addressing an exhibition, but they found out they spoke the same language and, after their trip to Norway in summer 2016, Pavel joined the Yosemite project and became Adam‘s belayer for the whole Dawn Wall route.