Evolene, a charming village nestled in the middle of Swiss Canton of Valais, widely known for the Matterhorn, might not be as famous as neighbouring resort towns such as Saas Fee, Verbier, and Zermatt but what this little town lacks in size makes up in a prehistorical rock that surrounds it: the area is listed as Swiss heritage site of national significance. What this means to you climbers is obvious, so let's have a closer look what this timbered, alpine area has to offer.
1. 10. 2015 Comments: 0

This "eagle's nest" town is set high in the Alps of Valais in a beautiful valley, located just 40 minutes drive south of Sion. Although the municipality of the same name lies in close proximity with all the "big" names such as Matterhorn or Mont Blanc, the area with its several close-lying villages is still relatively undiscovered.  While the high mountain rock is considerably harder and justly better known, many climbers enjoy several popular lower-grade rock climbing routes just as much. And surrounding rock in the Aiguilles Rouges, a mountainous massif adjacent to the Mont Blanc is what makes it worth to settle in for a few days here. 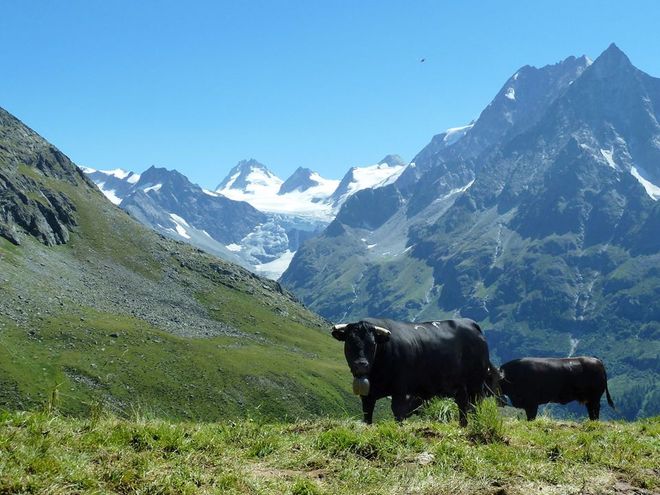 The "Rouges" are not only known for its spectacular views of the north side of the Mont Blanc massif just across the valley but for its rock climbing routes that are considered good introductions to alpine climbing - it's not all long glacier approaches. And there is a huge amount of rock climbing here, some of it virtually roadside!

Almost in the town of Evolene is a 4 pitch crag called Pont. Opposite the timber yard before the bridge just before the town, there is a place you can park and the crag is about 1-2mins walk away. You can check a topo here: http://escaladesvalaisannes.blogspot.ch/p/evolene.html 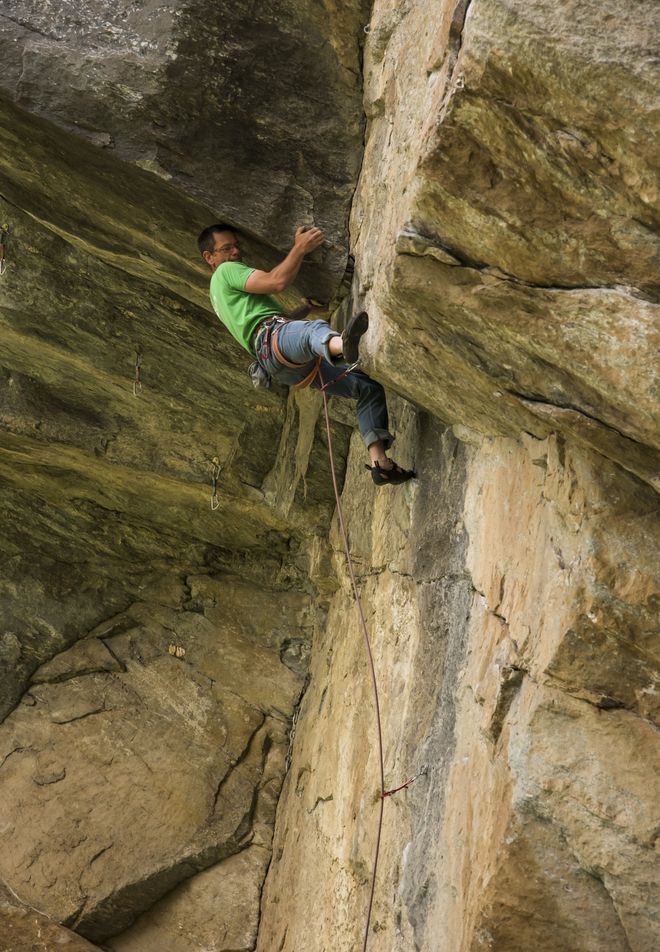 Pont, Evolene.  A crag with up to 5 pitches with lots of single pitch sport. Pictured here is Graham Frost, a local guide on Essaie de Vie, 6c

Most tourists are French mountain climbers who go come to Evolene to climb Mont Collon or Dent-Blanche but if you ever are in this area, it's also worth to spend some odd hour drive to Miroir d'Argentine if you fancy a long alpine rock route, or practice climbing fast and light. This remarkable 400m high limestone slab with routes from UK Severe and up to 14 pitches long of an excellent quality. 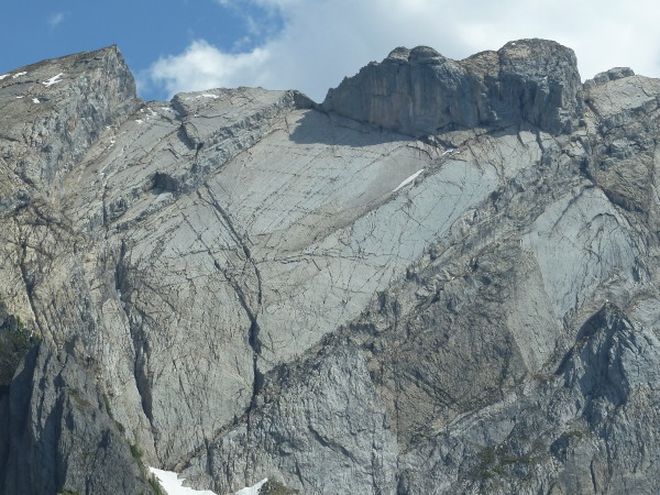 The face, smooth like a "mirror" is well known by sport climbers due to its beautiful climbing routes of all grades. 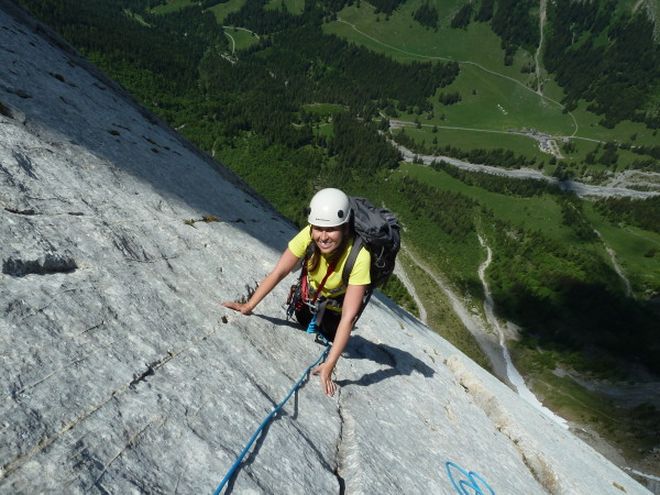 Another steep sport limestone at 2300m lies to the west. Sanetsch is amongst the best that Switzerland has to offer - perfect rock, fine setting, great climbing and amazing views back to the high mountains across the valley. Due to the location and access, traffic here is moderate. 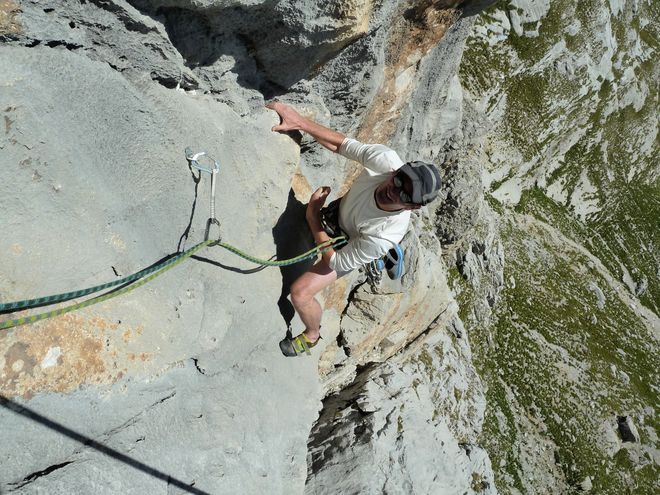 If you are up for a challenge then Rawyl's "Cry Baby" sector might do just fine. Adam Ondra once named it one of the best crags in the world and the hard routes in the eighth grades just confirm that. Rawyl has 10 pitch routes in a beautiful setting where it's rare to meet another team so if you seek a silent, vertical wall with some of the hardest routes in the country, Rawyl will deliver. However, the rest of the crag is dominated by easier routes, making it a suitable destination for climbers of all abilities. 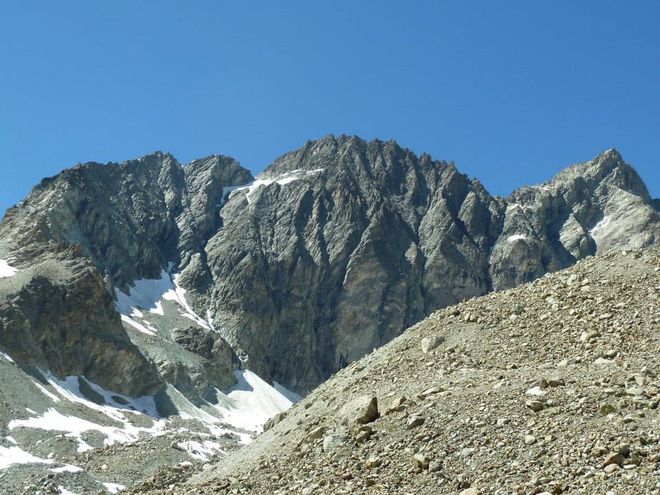 All in all, Evolene is not to be missed. One thing to consider before you hit the road is the fact that although the official language of the area is French, the locals, both young and old, still use the Franco-Provençal language so a local guide, who speaks English might come in handy and Graham Frost, the only British UIAGM/IFMGA guide based all year round in Switzerland, who resides in Evolene might be just the man. Graham’s business is Frost Guiding, catering for climbers of all levels from an Introduction to Alpine Climbing to classic alpine as well as rock peaks. Based right in the epicentre, running courses since 2007, Graham knows the area like the palm of his hand and whether beginner or expert, he will make sure you get the most out of your time in the mountains whatever your ambition might be.