During the third round of the penultimate stop of the UIAA Ice Climbing World Tour, thousands of spectators circled the spiraled car park ramp gaining a privileged view of the world’s best ice climbers. The nature of the arena enables fans to watch the action from several different vantage points, and the vortex effect of the venue generates a lively sound. Over 100 athletes from 17 countries, the actors in this live amphitheater, produced ice climbing of the highest order as round 3 of the season lived up to expectations and proved a key juncture ahead of upcoming weekend’s season finale in Rabenstein, Italy.
27. 1. 2016 Comments: 0

Friday evening witnessed the speed competition unfold. Maria Tolokonina had cruised to gold medals in both Bozeman and Cheongsong. Another win here and her position at the top of the leaderboard would prove unassailable.  It was final call for her main rivals, notably compatriots Ekaterina Koshcheeva and Maryam Filippova. 20-year old Koshcheeva accepted the challenge producing her best performance of the season to defeat the series leader by a few tenths of a second.

Going into next week’s final round in Italy, Koshcheeva is best placed to create an upset. She is 68 points behind the leader so will require another gold medal and for the imperious Tolokonina to suffer an off day. Filippova could only finish fifth and now lies third overall. Bronze medal was claimed by Ekaterina Feoktistova. Among the international athletes to performance impressively was American Kendra Stritch who finished sixth. 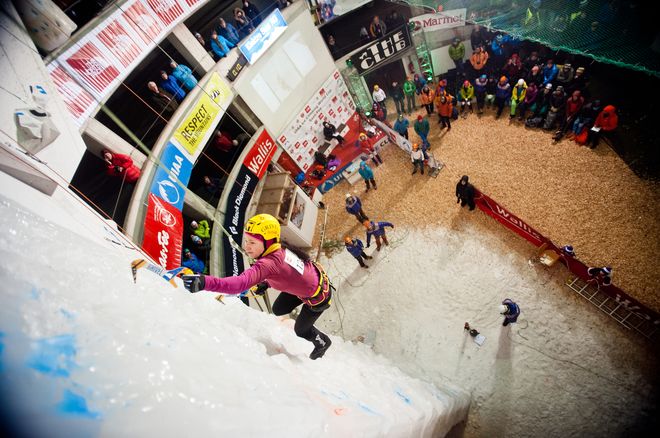 The men’s speed discipline is the most closely-fought of the series. In taking the gold medal in Saas Fee, Nikolai Kuzovlev followed in the footsteps of compatriots Maxim Tomilov (Bozeman) and Vladimir Kartashev (Cheongsong) in scoring the maximum 100 points. Just 16 points separate the top four athletes with Tomilov – so dominant in lead – still hopefully of a first world title in speed.

Last weekend in Cheongsong, Korean athlete Park HeeYoung produced a spell-bounding performance to win the lead gold medal and delight the watching public. In Saas Fee, it was the turn of two Swiss athletes to put in an incredible performance in front of their home fans. 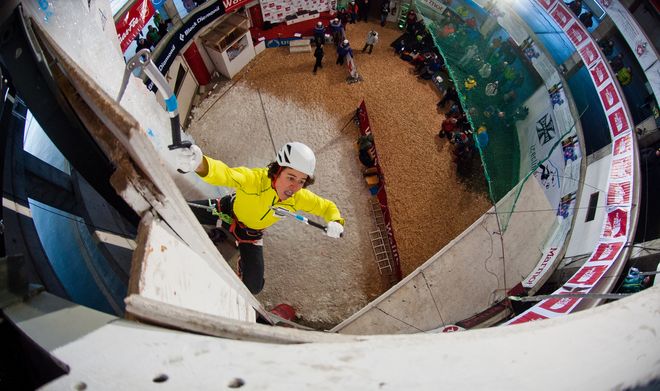 Petra Klingler, 23, finished sixth in both qualification and the semi-finals and probably had half an eye on a podium place come the evening’s final. Buoyed on by a partisan local crowd, Klingler produced a magnificent performance finishing just shy of the route finish. It elevated her to the top of the leaderboard with only Tolokonina, with a 100% record in the competition, able to overturn her. In the mark of a true champion, the Russian held her nerve to produce a flawless performance and take her fifth gold medal of the season. Nobody is catching Tolokonina now.

"Climbing without a crowd is not as much fun for climbers,” said Klingler when thanking the spectators for their vociferous support. "I tried everything for this second place and look forward to trying again in Rabenstein.” Klingler has form at the UIAA Ice Climbing World Cup. She won gold in Kirov, Russia last year. A special mention goes to another Swiss athlete, 17-year old Sina Goetz, who in her first ever UIAA Ice Climbing World Cup event made the finals. 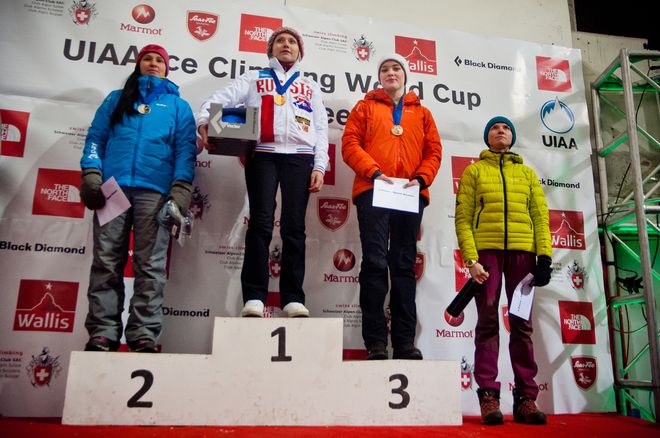 17-year old Yannick Glatthard from nearby Zermatt was the crowd favorite in the men’s lead competition.  Finishing first in qualification then fifth in semi-finals, Glatthard had shown his undoubted potential. Another virtuoso performance in the final gave him a momentary lead, before Slovenian Janez Svoljšak and then gold medal winner Maxim Tomilov climbed higher. Glatthard can be delighted with bronze while a second victory of the season gives Tomilov a 74-point lead over nearest rival HeeYong Park. The weekend in Saas Fee demonstrated that Swiss ice climbing is on a remarkable rise. With upcoming grand finale in Italy from 29-31 January, plenty of questions remain unanswered though so stay tuned!