Night of the Jumps headed this weekend to Cologne and it did not disappoint as the best riders in the world brought huge new tricks to Germany. Freestyle motocross fans were thrilled to the core as NIGHT of the JUMPs returned after a four-month break with the FIM Freestyle MX World Championship. Eleven riders from five countries lined up on the blocks, including three local contenders, Kai Haase and the Ackermann brothers.
7. 10. 2014 Comments: 0

The local heroes were keen to impress their fellow countrymen and the panel of discerning judges. Berliner Kai Haase immediately kicked off with the Volt. Luc Ackermann also went straight into his routine with panache, pulling off a maiden contest 360 on dirt as his second trick. Hannes Ackermann saved up his own debut trick for the double-up – a Rowdowa Backflip which is currently performed by only two riders in the world. This was enough to see the Thuringian into the final.

But it was not only the German freestylers who were premiering tricks galore. Australia’s Rob Adelberg also introduced a new stunt into his repertoire – the One-Hand-Tsunami. Adelberg and Ackermann were joined in the final by Remi Bizouard, Maikel Melero, Petr Pilat and David Rinaldo. Reigning champion Rinaldo will have been delighted to make it through to the Last Six after an eight-month lay-off due to injury. He secured his place with a perfect Doublegrab Flip. 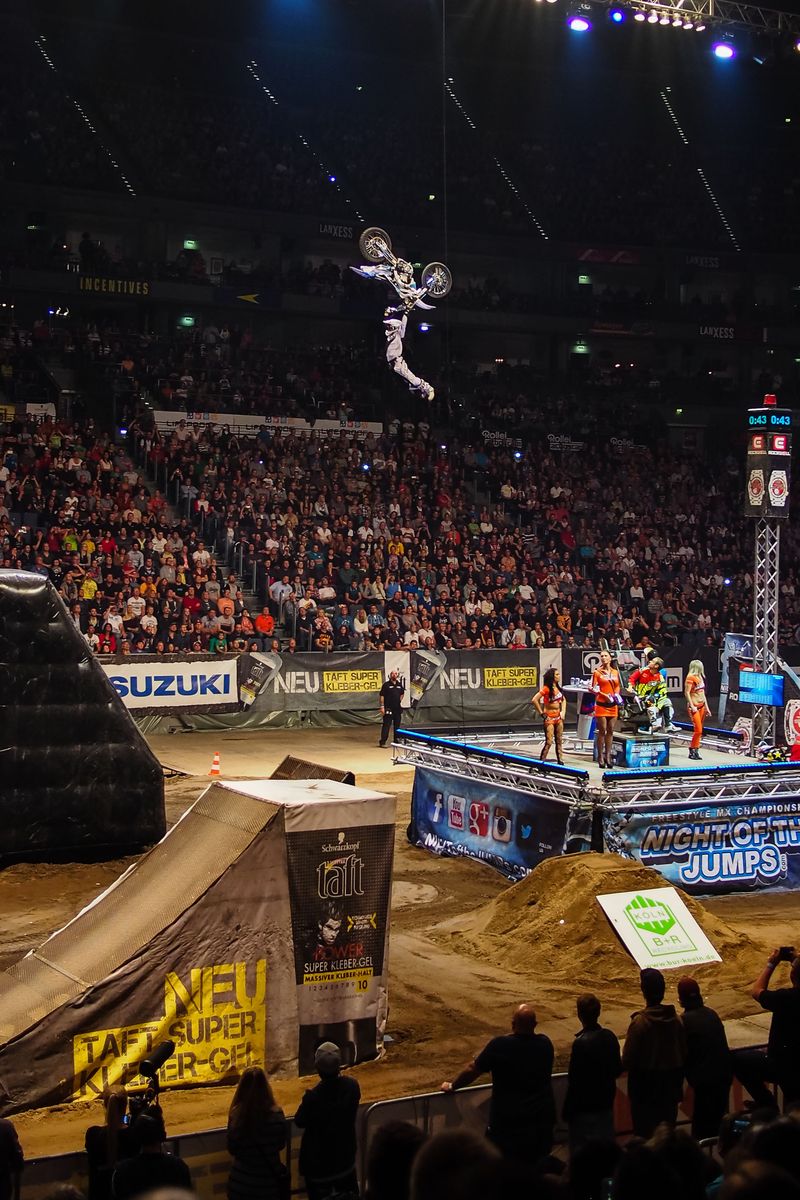 Libor Podmol failed to make the cut after coming off his bike attempting a Surfer Takeoff Tsunami. Brice Izzo and Jose Miralles also missed out. The Spanish rider then turned his attention to the LifeProof Best Whip. After Luc Ackermann crashed hard trying to complete the most ambitious whip in NIGHT of the JUMPS history, Miralles looked all set to take the trophy, but he was pipped to the post by Massimo Bianconcini.

The Maxxis Highest Air Contest also saw Bianconcini and Miralles go head to head. They were clearing the bar with assurance until it was raised to the nine-meters mark. Both failed at the first attempt, but Bianco succeeded at the second time of trying. At this point, Jose could do no more, as his bike had developed a mechanical problem. 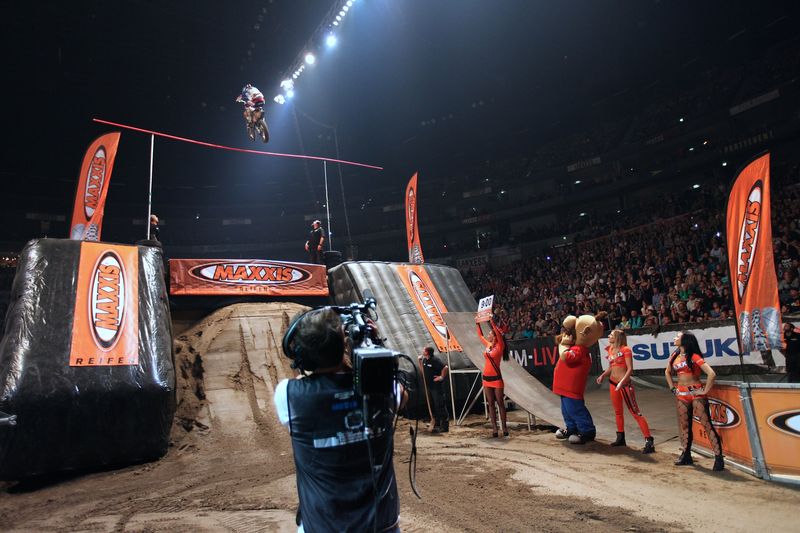 In the final too, the freestylers continued to delight the arena with trick premieres at the rate of one a minute. After Hannes Ackermann reprised his Rowdowa Flip, Petr Pilat performed a Dead Body Flip. Then David Rinaldo executed the first California Roll in the annals of NIGHT of the JUMPs. But this wasn’t enough to keep him in the hot seat, as the panel awarded higher marks to the run by Rob Adelberg consisting of Cliffhanger Flip, Tsunami Flip and One-Handed Tsunami. Yet the Australian was also to find himself outperformed in the German Grand Prix. 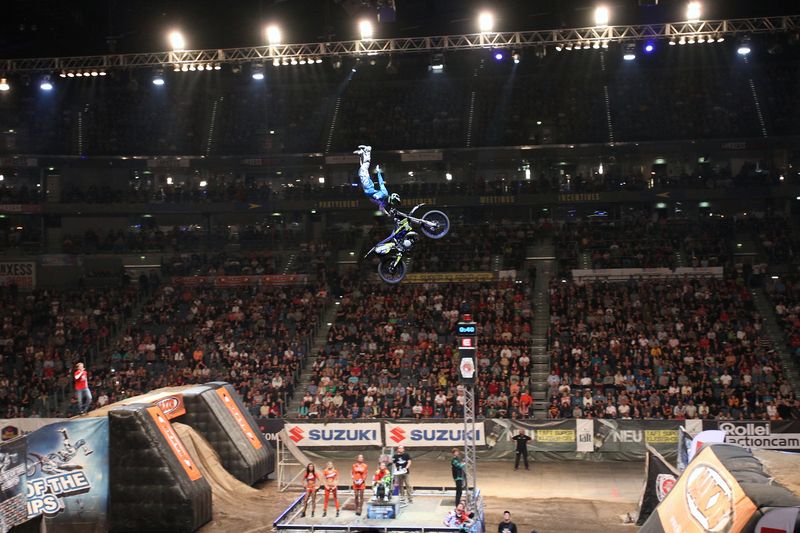 Maikel Melero’s Flair and Doublegrab Flip persuaded the judges that he deserved the top step on the podium. Remi Bizouard’s attempt to dislodge Melero ended in a Dead Sailor which bumped him down to P5. Finishing in third place behind Melero and Adelberg was Rinaldo, who at least had the consolation of picking up the Rockwell Watch for the best trick of the evening. So all in all, not a bad comeback for the Frenchman. 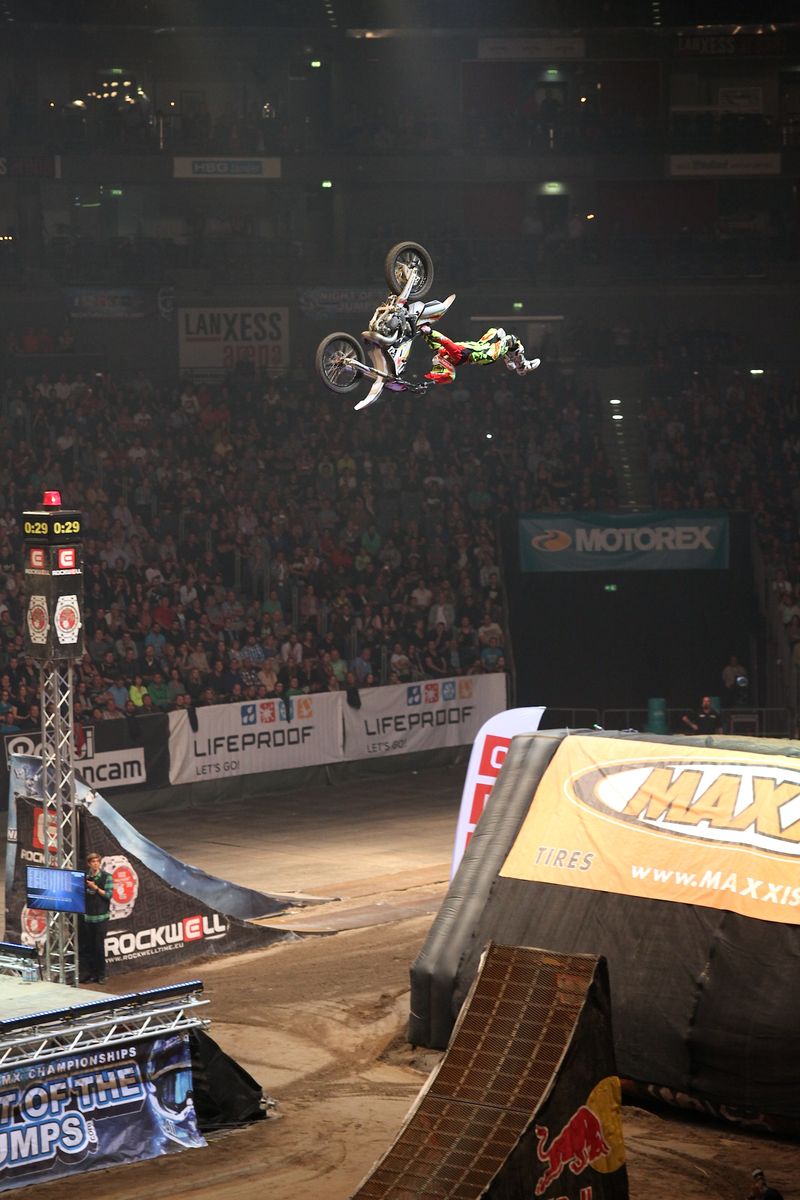 Maikel Melero tops the overall standings of the FMX World Championship after six rounds on 94 points. The victory in Cologne has extended the Spaniard’s lead. Dany Torres is his closest pursuer on 80 points.

The next two contests in the FIM Freestyle MX World Championship take place in four weeks time at NIGHT of the JUMPS in Shenzhen, China (1st/2nd November 2014). Stay tuned!