The first 4 shows of the 2015 Masters of Dirt - Beyond the Future by Monster Energy tour - managed to once more step things up even further in Vienna this past weekend. A brand new show format played out in four sold out shows over three days. Slightly shorter and streamlined from 3 hours previously down to 2 and a half this year, yet with even more intensity and more twists and turns, the international cast of riders, artists and performers added more heat to the show than ever before.
6. 3. 2015 Comments: 0 Photos: 14

Apart from fire some of this past weekend’s highlights included new elements that jazzed up the MOD show even more. For example the balloon segment had riders pushing to see who could get closest to the balloons suspended from the stadium roof. Matej Cesak seemed to have the most success with his long held rulers while Marc Pinol and Edgar Torronteras each managed to pop a few with seriously tweaked out whips and turndowns. Nicoli Rogatkin decided that the pedal crew also wanted in on the action and managed to burst the ballon twice with a massive “Late Frontflip”. Putting a modern twist on the traditional Step-Up concept was another treat from the MOD crew. FMX and BMX/MTB dueled on alternate landings to see who could jump higher! In all 4 shows, both disciplines managed to easily break 8 meters in height, with Andreu Lacondeguy opting to throw flatspin 360s over the bar. It was super competitive and had several different winners over the 4 shows - with the Bicycle riders the clear crowd favorite for this part of the show for their courage to boost so high with pretty much no suspension. 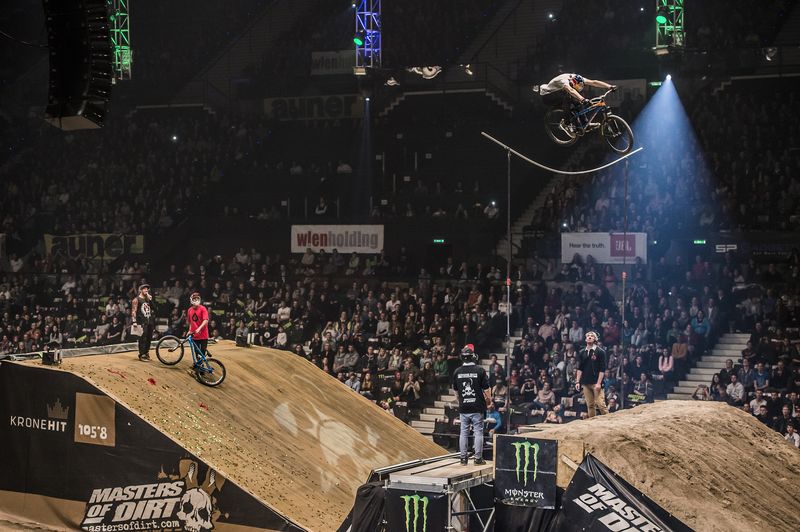 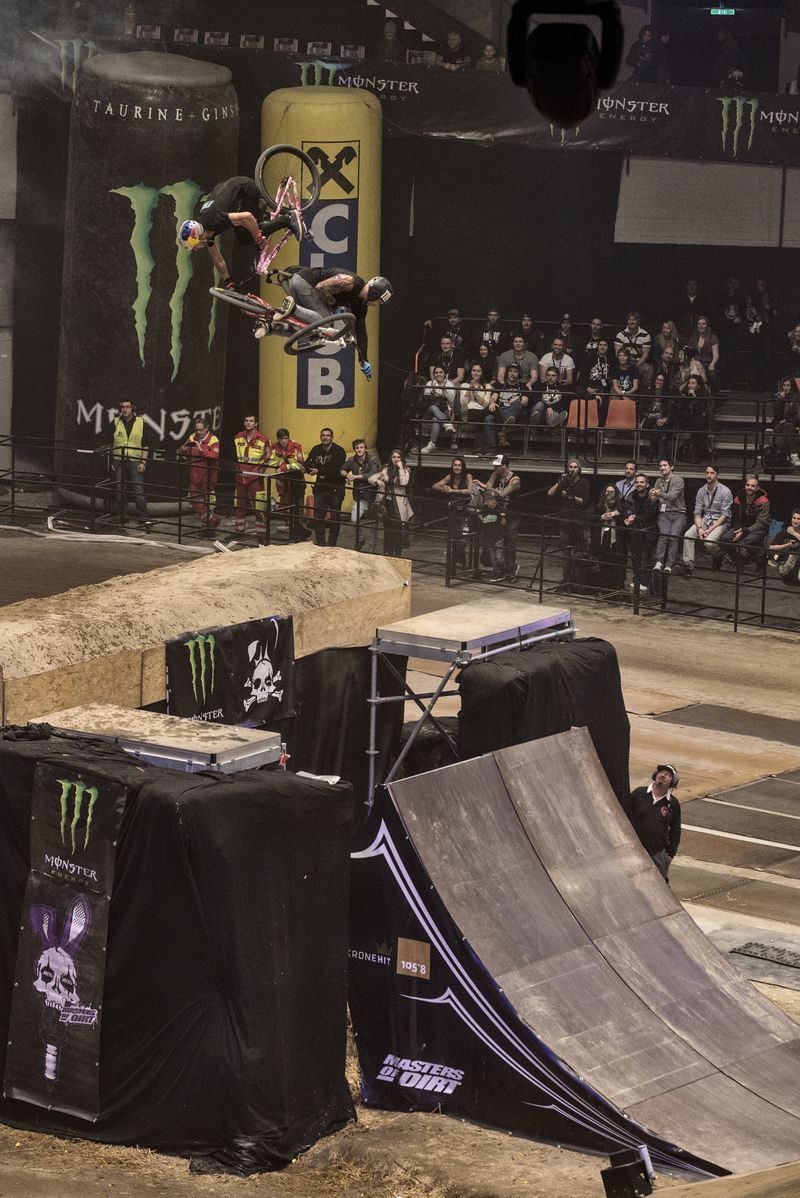 Another new element that proved hugely popular was the Big Battle, which pitted 3 FMX teams against each other (Team Catalonia vs. Team Europe vs. Team Rest of the World), with the crowd choosing their favorite. This was won in all 4 shows by the mad Catalans who had Jose Miralles, Edgar Torronteras, Marc Pinol, Antonio Navas and Rocky Florensa representing. Style, creativity and innovation all rolled into one! Antonio and Rocky showed some new Tandem FMX moves, along with their “Inside Varial” (where they change positions on the bike mid jump!) and added a long distance tandem backflip to their run. But that was not all, as Marc Pinyol had a world first of his own: the “Inside Roll”, which put a whole new spin on the current body variable variants. Marc’s new trick is essentially a front flip with his body above his bike while the bike flies in a straight arc. 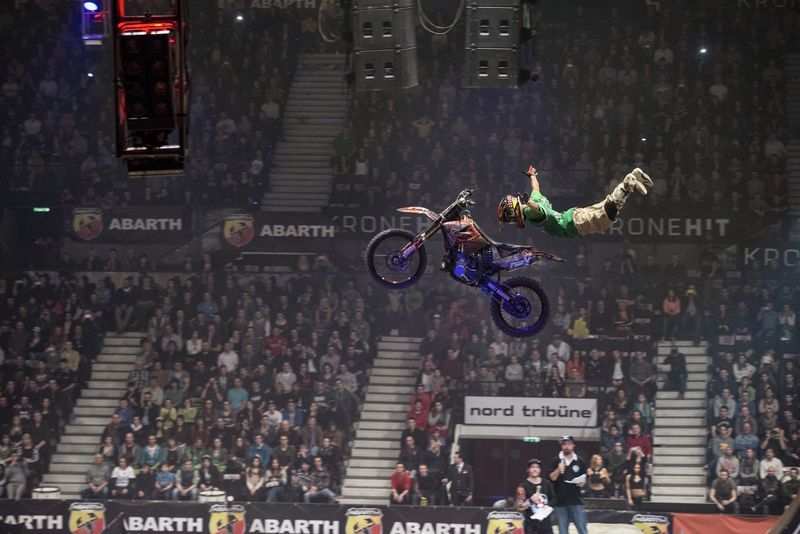 There were many other exciting highlights, as the action never stopped! From the massive BMX & Mountainbike jump line, to the 'World of Fire' segment, it ran on full intensity from start to finish. The BMX and Mountain bike riders had a fierce battle of their own, with BMX coming out on top in all 4 shows. The old Synchro session concept was sharpened and reworked to include BMX and Mountain bike synchronized with the FMX for 2015. Bienve Aguado and Patrick Guimez brought massive ‘ Big Banger ‘ BMX and Mountainbike tricks to the Tow-in segment, including double front flip, double backflip no-hander, 360 seat grab and backflip double grab, amongst others. The “Kids are the Future“ put a somewhat lighter and more optimistic spin on the evening.

There were bittersweet moments too, with the entire cast paying tribute to recently departed MOD family member FMX rider Kevin Ferrari before dedicating an intense fire filled finale to him. Overall, it was a damn good show and we can't wait to see the next one! 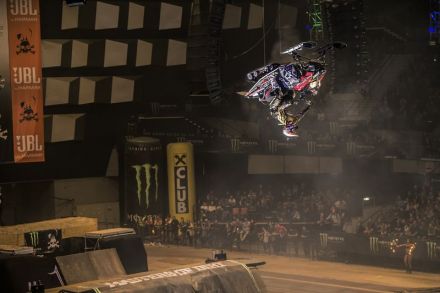 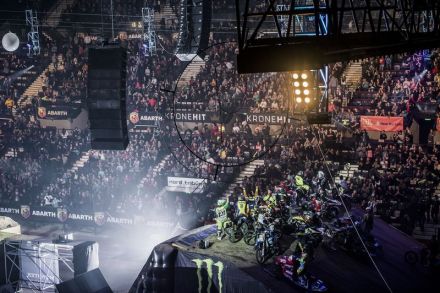 Masters of Dirt - Beyond the Future

Four shows in total are scheduled this February for Masters of Dirt, the craziest extreme event composed of about 80 FMX, BMX, MTB, snowmobile, buggy and other 4-wheeler riders. Taking place in Vienna, at the Wiener Stadthalle, for the first time in event's history, BMX ramps are placed close to… 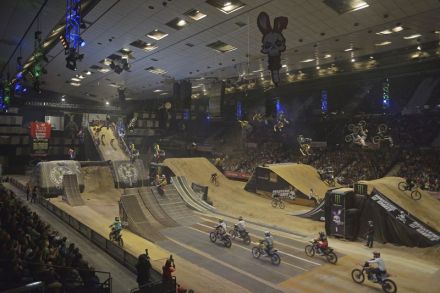