Next to Last Rounds of FMX World Championship Wrapped in China

A double bill of FMX Grand Prix took place this weekend in Shenzhen, China. Temperatures of 30 degrees and bright sunshine turned the stadium in the Chinese business metropolis into the perfect playground for some world championship action. Three landing hills in all with a double line and seven ramps provided a large track and many options in rounds seven and eight where the final battles included World Champions Libor Podmol and David Rinaldo.
5. 11. 2014 Comments: 0

The riders had to complete seven tricks plus the double-up in qualifying. The toughest tricks were hammered home into the Chinese dirt even in the quali. Championship leader Maikel Melero pulled off a Double Grab Flip, catapulting himself into second place in the preliminary round. Only Rob Adelberg, who showed the best style in the quali, was able to outdo him. David Rinaldo also executed a Double Grab Flip, progressing through into the next round along with Petr Pilat, who performed a Dead Body Flip which was not quite fully extended. Remi Bizouard completed the line-up for the final. 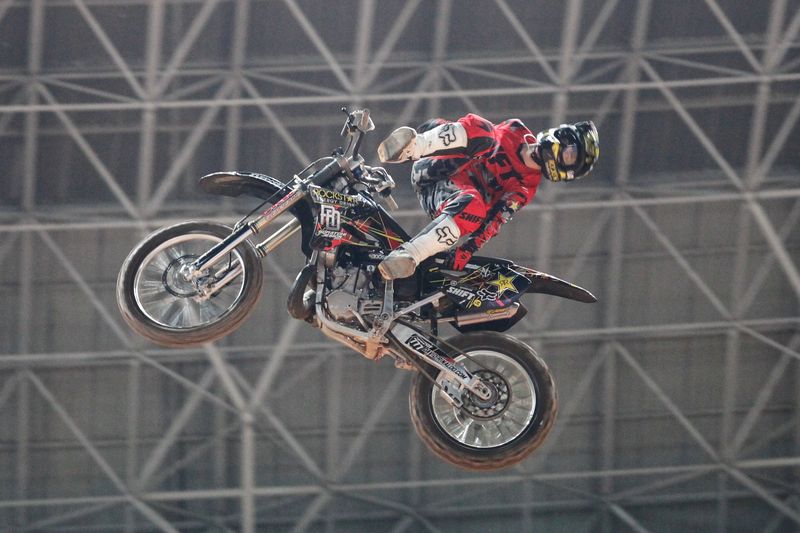 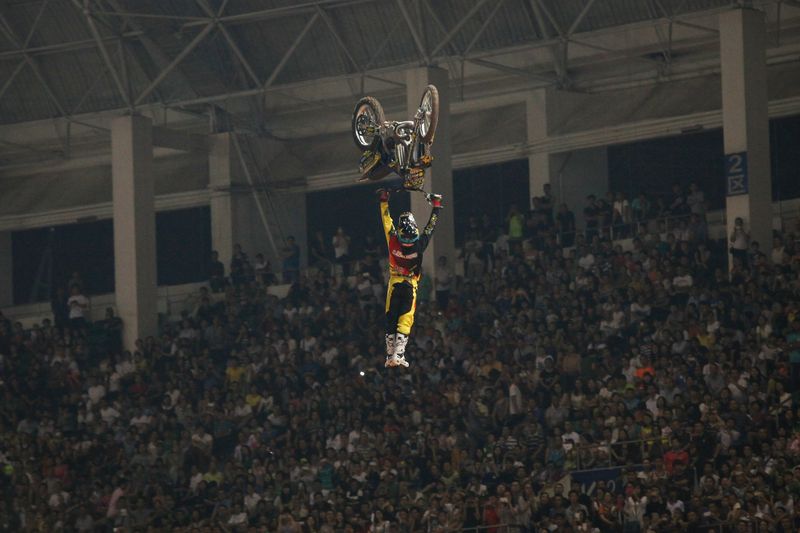 Bianconcini was still fighting for victory in the Rockwell Best Whip contest. He and Bizouard ‘whipped’ the pants off all the other competitors. However, going head-to–head with Bianconcini, Bizouard nosed in front to secure the trophy. The Italian Stallion could not bear the shame and put everything on the line in the Maxxis Highest Air contest, where he got the drop on both Jose Miralles and German rider Luc Ackermann with a jump of 9.30 metres. Three-time world champion Bizouard confidently opened the finale with a Seat Grab, Cliffhanger and Ruler Flip combo, but Czech rider Pilat went one better directly after that. He jumped a Shaolin Flip first, followed by a Dead Body Flip in the double line. The judges liked what they saw, placing him higher than the Frenchman. But here again, Pilat was also removed from the hot seat straightaway when Rinaldo pulled off his Double Grab Indy Flip and California Roll. At any rate, the Frenchman did not enjoy his time in the top position for long. Starting after him, Podmol let fly with a TP Roll, Cliffhanger Flip and Can Indy Backflip salvo. The audience and judges were in raptures when for the first time, he also effortlessly executed a Surfer Takeoff Tsunami Flip across the kicker ramp. 397 points gave him the lead. 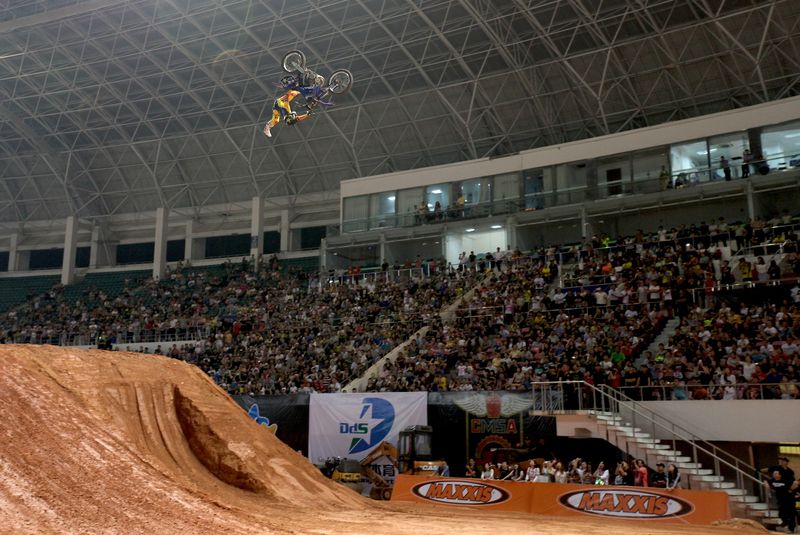 And ultimately, no one was able to snatch the top spot back from Podmol. Maikel Melero showed a strong run initially with his Double Grab Flip, but there was no quarter pipe on which to perform his 540. He could not catch Podmol without this trick. Nor was Rob Adelberg able to knock the Czech rider off his perch. His run was too ‘unsafe’ as he left the expected trick premiere for tomorrow. Nevertheless, it was enough to give him third place. Rinaldo jumped ahead of the Australian into second place, but Podmol secured a well deserved victory on the day, announcing his return to the fray in the championship fight. A strong wind was blowing throughout the qualifying stage, which made life difficult for the contestants. Petr Pilat was the first to show signs of nervousness as he crashed on his first jump. But he jumped right back on his bike and thrilled the crowd with his proprietary Dead Body Flip. Next up was current championship leader Maikel Melero who landed in the dirt on his seventh jump. That brought his participation to an untimely end. Libor Podmol stumbled on his Cordova Flip, but retrieved the run with some great combos to qualify fourth. 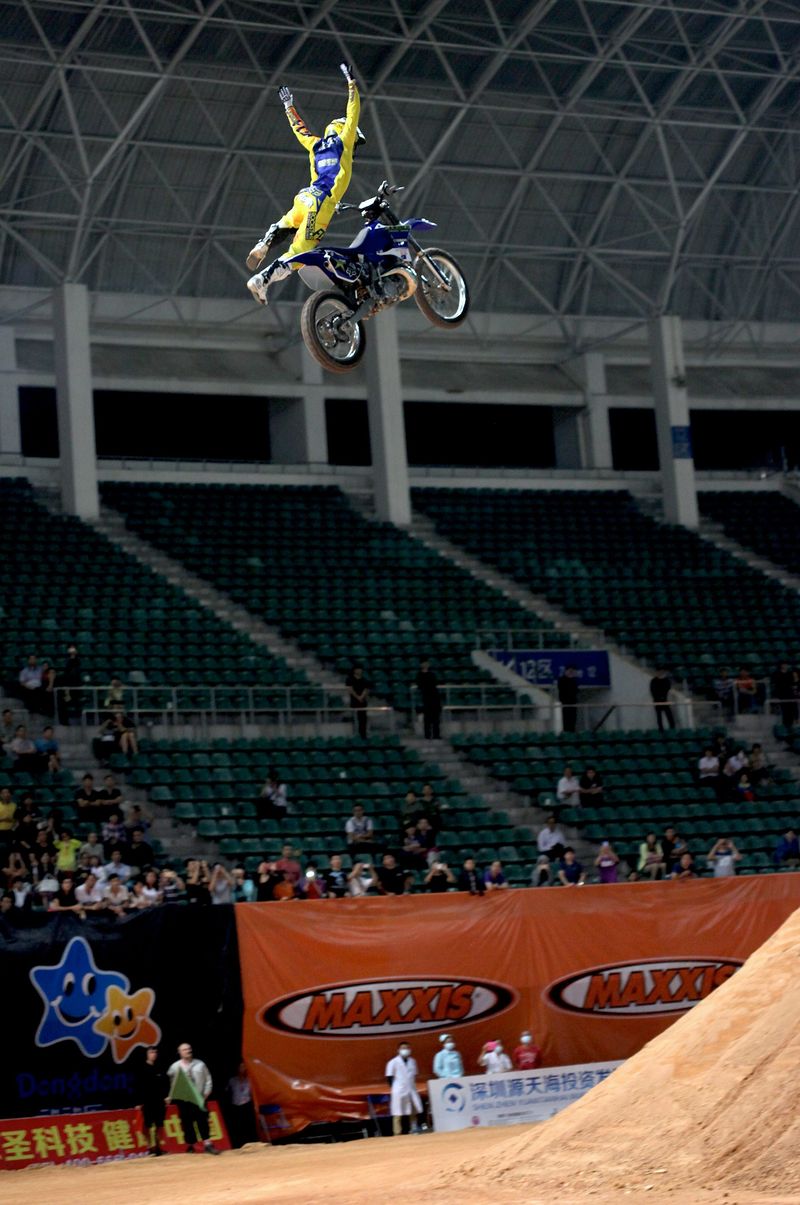 Meanwhile, Remi Bizouard, Rob Adelberg and David Rinaldo seemed untroubled by the conditions and booked the top three slots in the final. Brice Izzo and Hannes Ackermann were less impressive than on Saturday but made it through nonetheless. Luc Ackermann narrowly missed out on his first world championship final, but that only seemed to increase his motivation for the Rockwell Best Whip contest. There was a minor sensation here, with the 16-year-old German beating three-time FMX world champion Remi Bizouard. Both performed extravagant whips, but the judges ultimately decided in Luc’s favour by a wafer-thin margin. 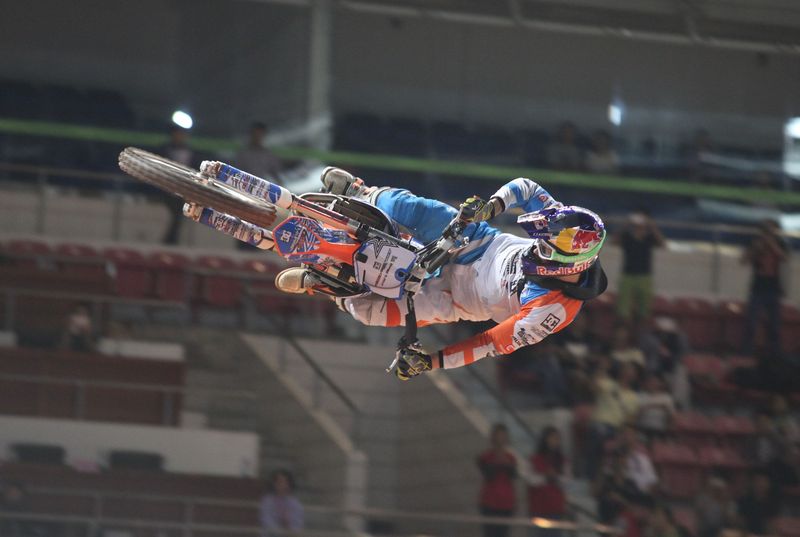 The Maxxis Highest Air once again turned into a showdown between Massimo Bianconcini and Jose Miralles. The bar was gradually raised to 10.00 metres, at which point Jose dislodged it, leaving Massimo to lift the trophy. Hannes Ackermann opened the final with a Rowdova Flip and his new ‘Porti Air’, a display that was good enough to overtake Brice Izzo whose run had to be repeatedly interrupted because of the gusty conditions. Podmol reprised his Surfer Takeoff Flip to remove Ackermann from the hot seat. The Czech occupied it until the last of the finalists completed his run, as neither Remi Bizouard nor Rob Adelberg managed to outscore him. But his time was up when David Rinaldo executed an ultra-extended Doublegrab Flip followed by a California Roll. So the evening ended with Rinaldo in first place ahead of Podmol and Adelberg. 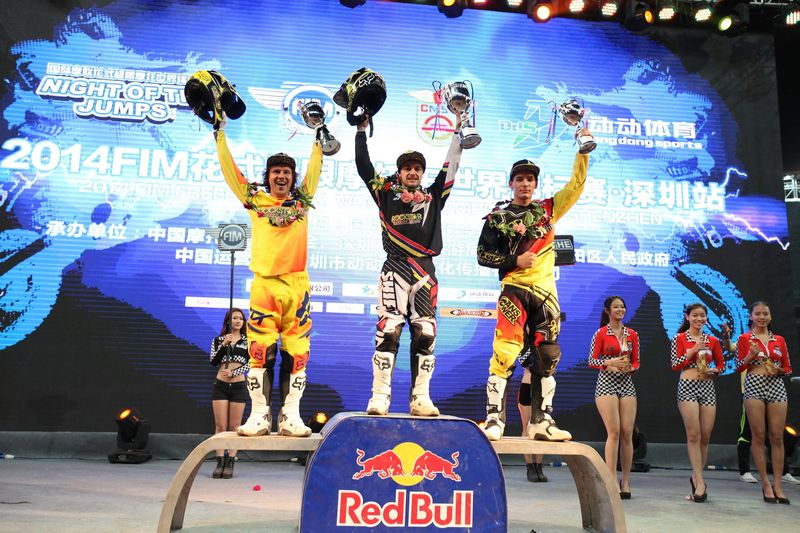 Maikel Melero continues to lead the FMX World Championship on 120 points, but his margin over Libor Podmol has now shrunk to six. So there is still everything to play for in the final two rounds of the championship.

The 2014 FIM Freestyle MX World Champion will be crowned at the Festhalle in Frankfurt on the weekend of 21st/22nd November. Because of a clash of dates in Sofia (Bulgaria) and also the ongoing Ebola crisis in West Africa, the events scheduled for those locations have had to be cancelled or postponed to next year. Consequently, the Night of the Jumps weekend in Frankfurt has been upgraded to another double bill of championship contests, and the series will be decided on German soil. Stay tuned!