The toughest mountainbike race of the world starts Sunday, 15th! The eight-day race is often referred to as the "Tour de France of mountain biking" and it‘s the most prestigious MTB stage race in the world. Especially with a view to the Olympic Games in summer, the Cape Epic is gaining in importance as a perfect preparation in the most demanding conditions.
6. 3. 2020 Comments: 3 Photos: 8
Facebook Twitter LinkedIn

Also this year the Cape Epic leads through the impressive landscapes of the Western Cape of South Africa. The riders have to complete 647 kilometers and 15550 meters of climbing. With Nino Schurter/Lars Forster (both SUI), Manuel Fumic (GER) /Henrique Avancini (BRA) and Urs Huber (SUI) /Simon Stiebjahn (GER), the world's best riders will be competing against each other in the men's event. With Annika Langvad (DEN) /Jenny Rissveds (SWE), Mariske Strauss/Candice Lill (both RSA) and Robyn de Groot (RSA) /Adelheid Morath (GER), the absolute elite are ready to fight for the Cape Epic victory in the women’s race.

Luís de Camões characterised Table Mountain as the mythological giant, Adamastor. The petrified titan provides fast and technical, at times, riding for the opening kilometres of the 2020 Absa Cape Epic, in Table Mountain National Park. Returning riders will be well briefed on what to expect; steep gradients heading both up and downhill, massive trail-side crowds and a flutter of pre-race butterflies. The Prologue features climbing from the off; through campus and the UCT XC Track and onto the dual tracks of Table Mountain National Park. The first significant challenge is the Quarry Climb. Spurred on by cheers, from trail-side fans, riders will then ascend to Dead Man’s Tree; virtually the highest point of the stage. The asphalt of Table Mountain Road provides rolling respite before the white knuckle descent of the day’s Land Rover Technical Terrain: Plum Pudding.    1st Stage: Ceres - Ceres. Distance: 98 km. Climbing: 1800 m Not since 2013 has Stage 1 of the Absa Cape Epic dipped below the 100-kilometre mark. It is definitely no play-day though. Hard work lies ahead to harvest the rewards of the exceptional Eselfontein trails. After a relatively easy start to the stage, the first singletrack climb is fortuitously wider than most, actually allowing for overtaking opportunities. Two more singletrack climbs follow, including the ascent of the Dead Man Walking climb to the race’s first Dimension Data Hotspot. The singletrack from the summit is the day’s Land Rover Technical Terrain, Pipeline. A final loop, from the central water and spectator point complex on the Eselfontein farm, takes in more scintillating singletracks including some of the oldest purpose-built mountain biking trails in the country. 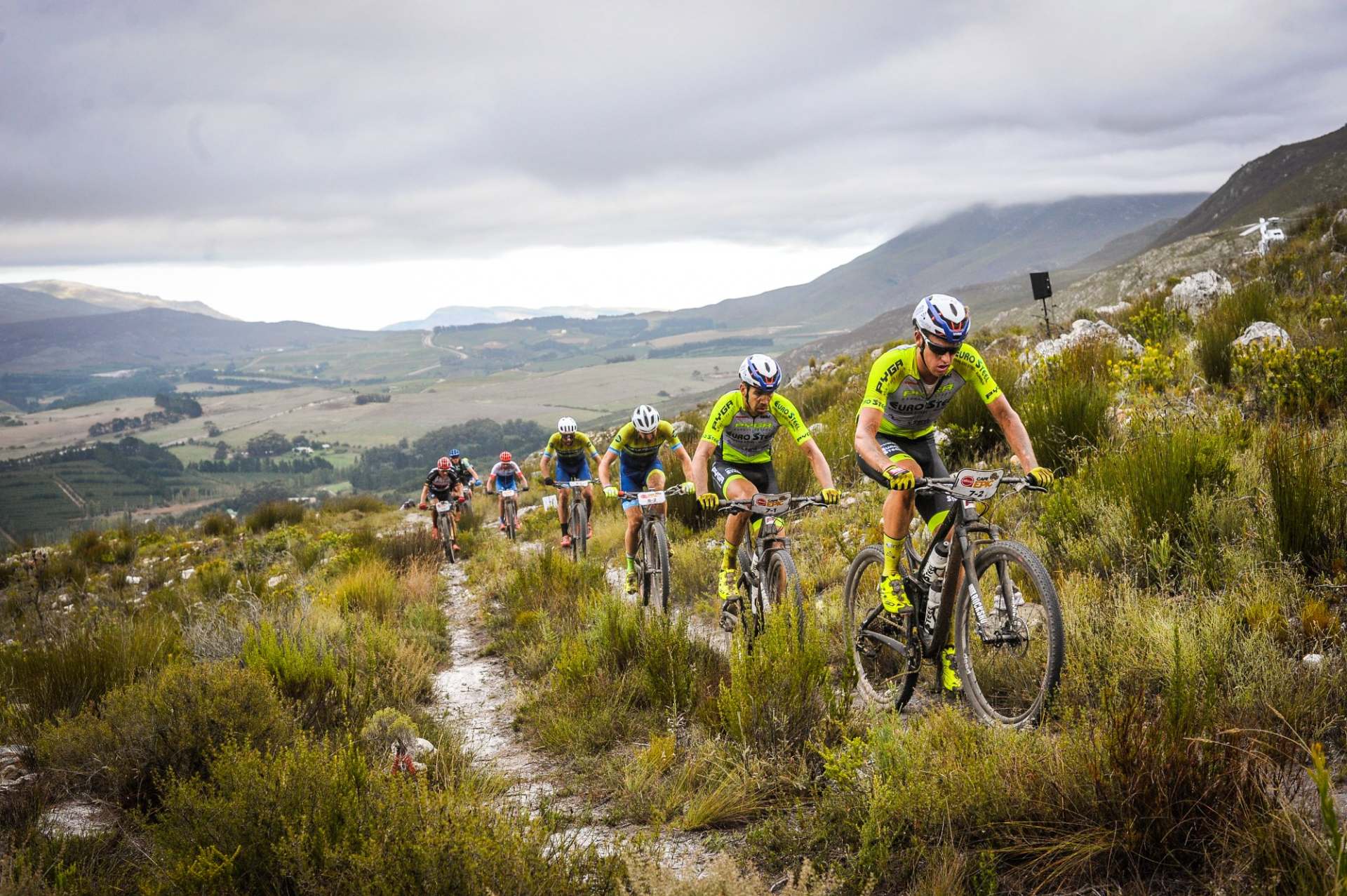 The Witzenberg Valley is undoubtedly one of mountain biking’s most challenging playgrounds, making Stage 2 a fitting holder for the title of Queen Stage. Sheets of sandstone provide the ultimate testing ground for man, woman and of course, machine. No quarter is given by Mother Nature in this fertile valley. For those strong enough not to require one, there are rewards around every kink in the trail. First though you have to reach the fabled playground. Crossing the Ceres Valley is the first step on the journey. Then comes the Old Gydo Pass. On the Bokkeveld plateau the dual track climb gives way to singletrack. Snaking ever upward into the Witzenberg Mountains the trail becomes increasingly technical. As it starts to weave its way between sandstone outcrops the Land Rover Technical Terrain begins. It is far from the only technical section of the day’s route however. In the valley below, nearly 20 kilometres of virtually uninterrupted singletrack awaits. Only the day’s final climb brings an end to the singletrack. From the summit Table Mountain is visible on clear days, as is the stage finish, at Saronsberg. A final white-knuckle singletrack descent, along an old wagon trail, then drops from the heights of the Witzenberg to the Tulbagh Valley far below. With two converging mountain ranges to explore, Stage 3 of the 2020 Absa Cape Epic is not short on climbing. Nestled in the nook between the Groot Winterhoek and the Witzenberg Ranges the Tulbagh Valley is not hasty to reveal its rewards. The stage begins benignly enough, until the first ever Dimension Data Hotspot sprint, down the town’s 300 year old Church Street. Thereafter the climbing begins in earnest; upwards towards the Bone Trail. Beyond, a network of brand new singletracks explores virgin territories. Well-established singletracks provide an exhilarating reward for conquering the two thirds of the day’s climbs. But one huge climb remains; Fanties Pass, arguably the toughest climb of the 2020 route. Topping out at over 20% and averaging 14% for its final 2 kilometres it will demand every ounce of energy. Below the summit the Land Rover Technical Terrain awaits on more virgin singletrack. 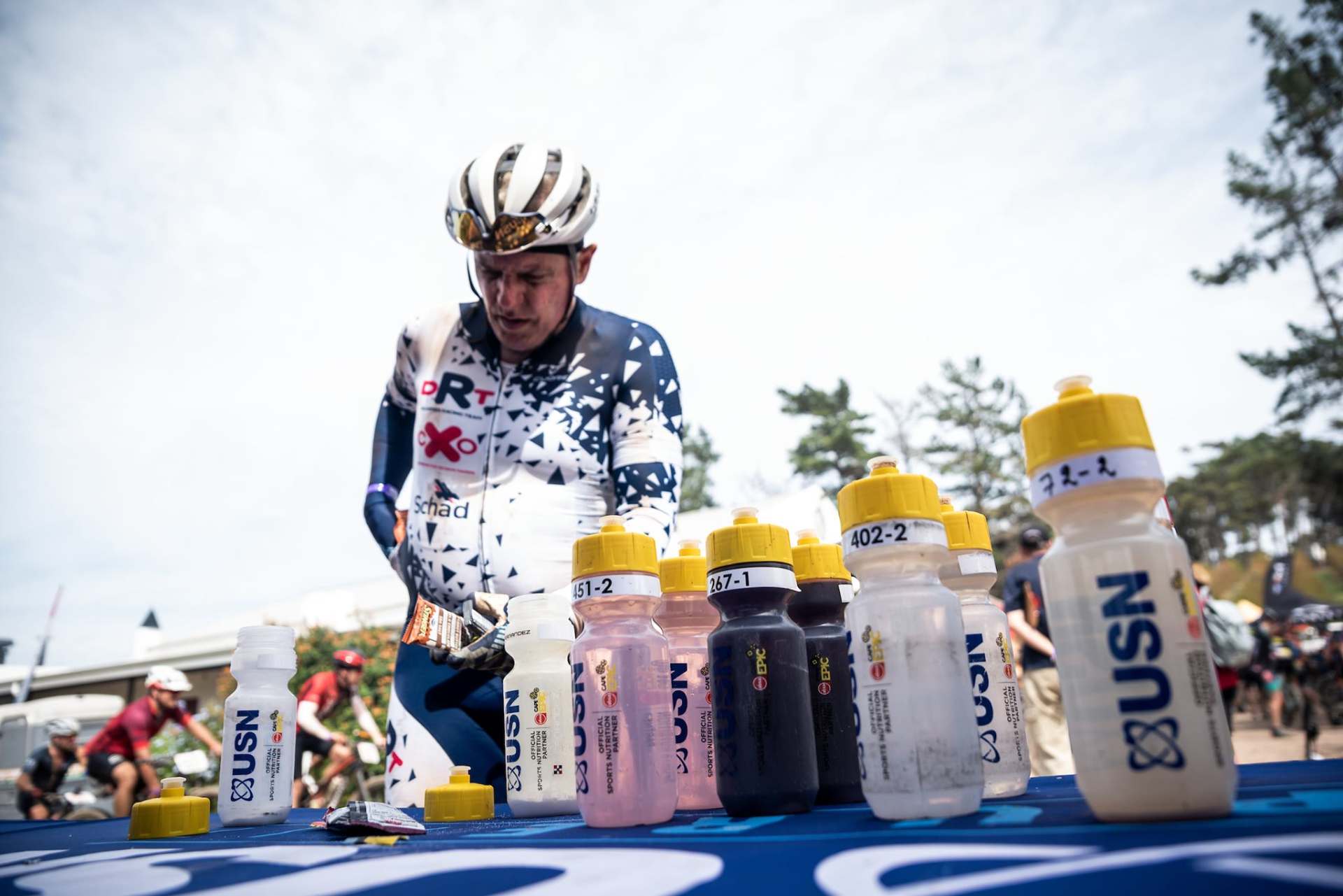 After three days with precious few free kilometres the transition stage from Saronsberg, in Tulbagh, to the Cape Peninsula University of Technology’s Wellington campus appears on paper to be an easier day. The first 100-kilometre plus stage includes more asphalt than any other in the race. Yes, the early kilometres may tick past with unnerving ease, but once the surface begins to roughen the challenges will come thick and fast. Brutally uneven dual tracks through a private game reserve provide a sudden shock. Kluitjieskraal Climb reinforces that this is the Absa Cape Epic after all. A truly untamed section of riding follows; remote and rugged, concluded with the stage’s Land Rover Technical Terrain, Bull Run. Bainskloof Pass is by no means the most strenuous of the Cape’s iconic mountain passes; but be warned, do not burn too many matches racing up it. A final sting provided by the Wild Boar Trails’ white trail climb will catch those who have left nothing in reserve. 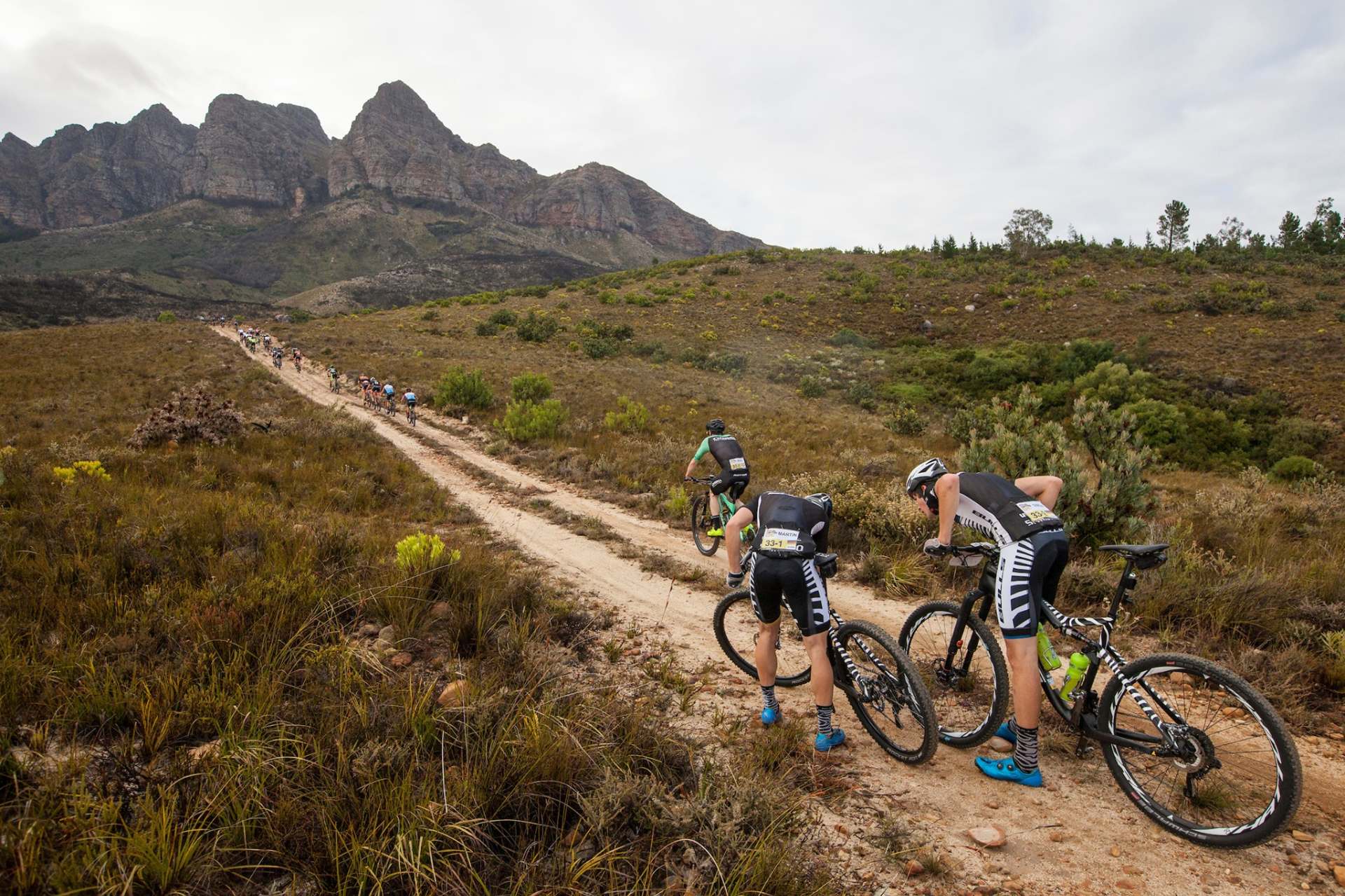 Short and brutally steep, on exhausted legs, Stage 5 will be a major physical and psychological hurdle on the trail to Val de Vie. In the past stages like these have been dubbed play days, but there is little playful about this intense test. The climbing starts virtually instantaneously. Leaving Wellington, the only way is uphill on the lengthy Hawequa Climb. It is never steep, but rather a slow, leg-sapping grind. The descent from the summit starts on dusty dual track, before slipping into the Brooklyn Bridge singletrack. Singletrack climbs and descents blur into one vision of agony and ecstasy thereafter. Up Seven Peaks, down Cool Runnings, up Aap d’Huez into Full Monty – the day’s Land Rover Technical Terrain – and a further black diamond, black route loop. The fun, games, climbing and, in all likelihood, suffering are not quite over yet. Riders must battle home for very hard-earned rest and recovery ahead of a big weekend of riding. A saw tooth profile is exactly what riders do not want to see come the penultimate day of the Absa Cape Epic. Riding through a private nature reserve, the presence of zebra, eland, springbok and particularly giraffe will serve as welcome distraction from aching legs. Steep but mercifully short vineyard climbs start the day before the Wild Boar Rollercoaster provides singletrack thrills. District roads and farm dual tracks, through iconic wine farms manage to avoid any serious climbs on the way to Arc en Ciel Game. Once in the private reserve, the trail surface deteriorates sharply, demanding concentration. Upon exiting the reserve, the climbing begins in earnest. The day’s Land Rover Technical Terrain provides a strenuous climb before the Python singletrack ascent adds another telling point of reference. Then the Wild Boar Trails are all about challenging thrills. In the closing kilometres, Golden Mile deposits riders into the farmlands surrounding Wellington and allows winding dual tracks to lead them home. 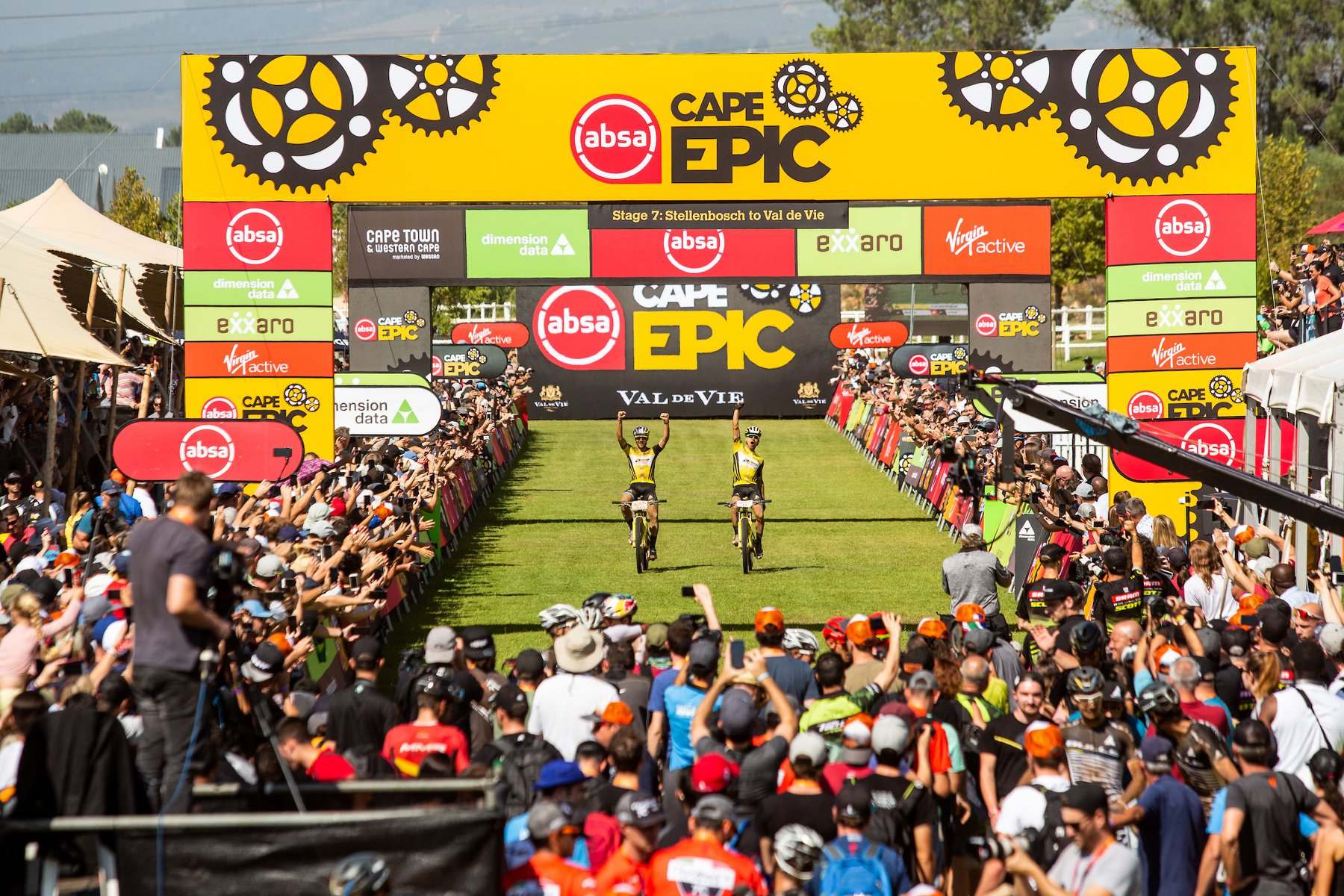 Between Wellington and Val de Vie lie a final 66 kilometres of Untamed mountain biking. The Grand Finale is one last test to ensure that no finisher’s medal is handed over without the realisation being driven home that it was hard-earned. Patatskloof, Beulah and the Hawequa Climb roll neatly into one right from the off. At the summit of Hawequa, the final Dimension Data Hotspot provides a reward for the fastest to the top. Hugging the dizzyingly steep slopes of the Hawequa Mountains, the route loses hard earned altitude only to ascend again, up the Protea Climb. Undulating dual tracks tick off vital kilometres before the Freedom Struggle Climb and the Bone Rattler, which also forms the race’s final Land Rover Technical Terrain. Then, finally, onto the spectacular grounds of Val de Vie. Each Absa Cape Epic finisher will have had to earn his or her place with grit and determination. It is afterall the Untamed African Mountain Bike Race; the Absa Cape Epic; the Race That Measures All. 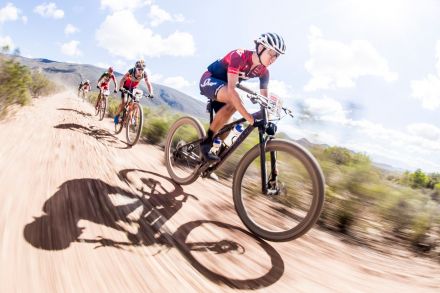 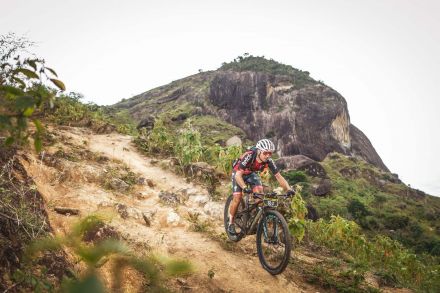 Hi...
The2020 Absa Cape Epichas been cancelled due to concerns over the coronavirus pandemic organisers have confirmed. The news was confirmed in a press release sent to media on Friday evening. The event was due to start on Sunday, 15 March on Table Mountain and end on 22 March in Paarl after travelling to Ceres, Tulbagh and Wellington.
you can take the more information then click here https://klantenservicebellen.co/amazon-contact/

That?s a nice article, thank you for a great article. It helped me a lot. Keep it up Must Visit: [url=https://brotherprinter.klantenservicebelgium.be/]Brother Printer Klantendienst Belgie[/url]