The 34th Annual US Open Snowboarding Championships is a Wrap

The world’s best snowboarders came together in Vail, Colorado from February 29th – March 5th to partake in the longest running, premier snowboarding event, the Burton US Open Snowboarding Championships. This world-class halfpipe and slopestyle competition, packed up with action, free concerts, events and activities for all ages is the pinnacle of Snowboarding, gathering national as well as international field stars. Kyle Mack (USA) and Jamie Anderson (USA) took the winning slopestyle titles while Chloe Kim (USA) and Shaun White (USA) earned the halfpipe titles. More in the article.
8. 3. 2016 Comments: 0

Kyle Mack (USA) clinched the men’s win stomping back-to-back triple cork 1440s on his first run earning a score of 89.75 and the top score to beat throughout the extended finals. His winning run started with a backside 180 hardway on, to a Cab 270 on in the upper rail section, followed by a backside Rodeo 540 on the transition feature, into a switch backside 540 melon, to a frontside triple cork 1440 tailgrab, into a backside triple cork 1440 Japan on the triple jumps. Eighteen-year old Kyle Mack first competed in the US Open as a seven-year old in the Junior Jam, eleven years later he says, “To be on top here is a crazy feeling; to win it is amazing. All the riders here are top notch—the best in the world.” Kyle says he’s motivated by the unique atmosphere at the Open, “My friends and all the support you get here, the whole crowd cheering for you and all your friends hugging you when you win, that’s why I do it—that’s why I snowboard.” 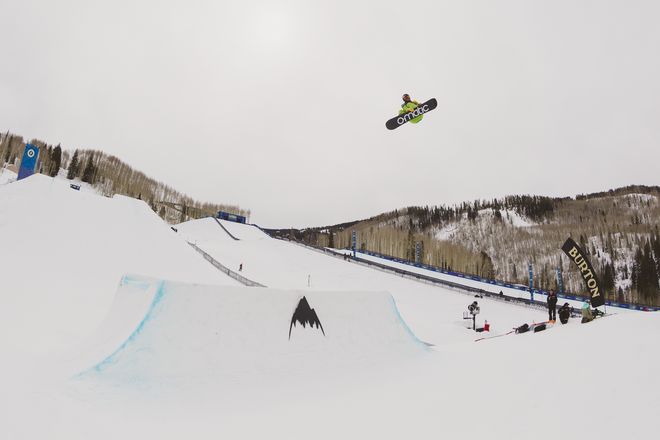 Defending champion Jamie Anderson (USA) claimed her fifth Burton US Open slopestyle championship title today, earning the high score of an 86.65 on her first run. Her confident and clean run included a frontsidelipslide and a backside bluntslide 270 out on the upper rail section, a backside 180 nosegrab on the transition feature, heading into the jump section with a Cab inverted 540 mute grab, a frontside 720 mute grab, and ending with a massive backside 540 Indy over the 75-foot final jump. 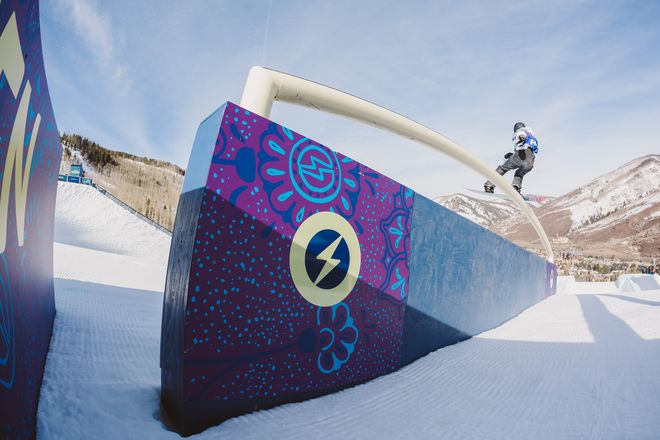 Jamie said, “I really liked the course, it was fun to see something different and have to challenge yourself and try some transitions.” Jamie also shared why this, her fifth US Open slopestyle title, means so much, “I’ve always looked at the Open as one of the coolest events, especially as the last big event of the year,” she said, “ It just means a lot. I love that it’s still core snowboarding and that it’s an event that’s been going on for so long—it’s really helped cultivate our sport and brought so much progression.” 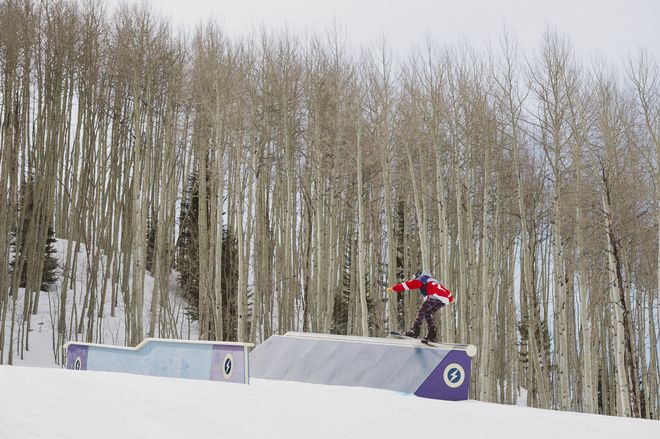 followed by Cheryl Maas (NED) in third with a 76.35; photo: © Rachel Zimmerman

After a great concert (Big Grams), the legendary event culminated the next day with the world’s top riders competing in the historic halfpipe finals - the pinnacle event of the weeklong competition. The field of 10 men and six women were treated to a perfectly sculpted 22-foot pipe and an energetic, packed crowd at Vail Mountain in a best of three-run finals format. This win follows a two-year hiatus from the US Open following his most recent wins in 2013 and 2012. Shaun said of this win, “It feels great – every time I show up I want to win just as badly as the time before. I took last season off to get pumped on the sport again. I just wanted to have some fun and take a little breather from contests. Now that I’m back, it feels right, it feels good.” Shaun added, “I’ve been coming to this event since I was a little kid. It’s not only a tradition, it’s one of the world’s best events. Look at the crowd today it was incredible!” 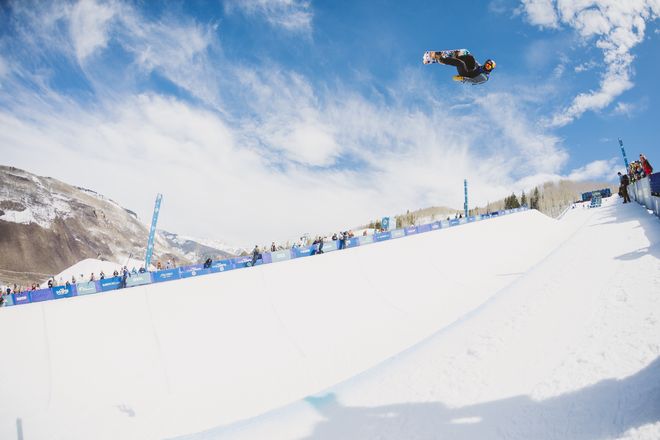 Benjamin Ferguson (USA) moved into second place on his last run with a score of 88.62; photo: © Peter Cirilli After earning a second place finish in 2015, 15-year old Chloe Kim (USA) wasn’t content to just win the US Open, she was determined to win it with her very best run. Chloe earned the top score on her first run and held it through the finals. As the last rider to drop with victory assured, Chloe took the opportunity to show the crowd exactly why she’s the very best. She started off with a massive backside air traveling nearly 30 feet down the pipe, followed by a frontside 1080 tailgrab, into a Cab 1080 stalefish, ending on a frontside 540 Indy for an improved top score of 89.37. 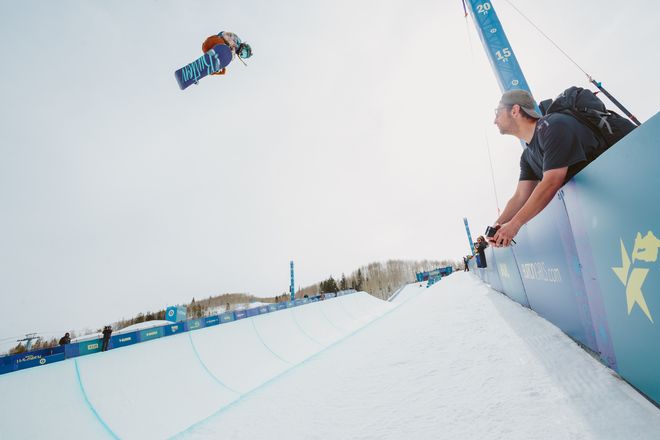 Chloe says, “I wasn’t really stoked on my first run. For me, my goal is to be happy with my riding at the end of every contest. So I just wanted to get a rebate on it and just grab everything a little better and go a little bigger. I’m stoked I put it down on my third!” 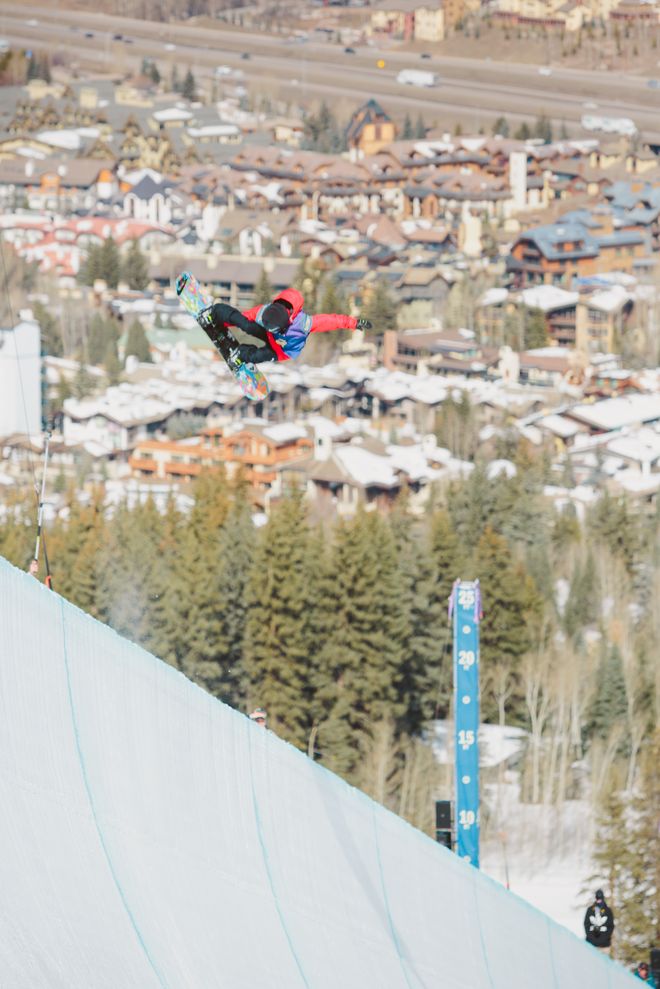