A New Era of Aerial Space Net Adventure is Born…

Every year during the Fall season in Moab, there’s been a growing number of adventure sport athletes who converge in this incredible desert landscape to enjoy the elevated views and seek out exciting new ways to get the blood pumping through their veins. Amongst the two main groups of people who gather in Moab are the BASE jumpers and highliners, who come from all around the world for the annual Turkey BASE Boogie (ongoing for more than 10 years) and G.G.B.Y. highline gathering (with its 7th annual celebration). Both groups come to the same desert playground to communally celebrate life together and push themselves in new innovative ways with their respective sports, but often they’re spread out across the vast red cliffs experiencing different adventures with land and air. This year’s gathering, however, felt noticeably different than all others in the past for one main reason…
26. 1. 2015 Comments: 0

Words by Brian Mosbaugh: The highliners spend long periods of time honing their focus in space walking across long one-inch wide pieces of webbing while the jumpers gather in masses across cliff edges to throw themselves into the abyss for a wild and fast paced flight back to the canyon floor below. Both activities attract different crowds with varying dangerous interests, but the fact remains that we all love this shared desert paradise for the same reasons of its undeniable beauty, solitude and freedom. Despite our differing focuses, we all love being immersed in nature and spending time with our friends in a quiet environment. 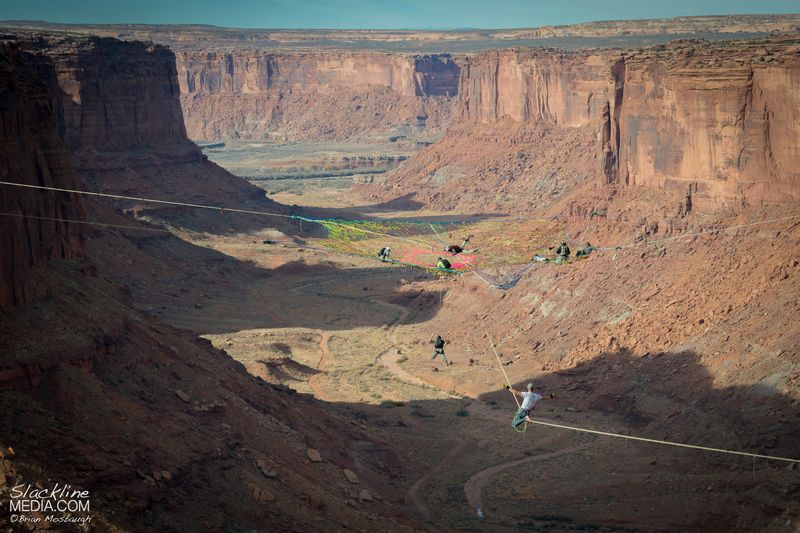 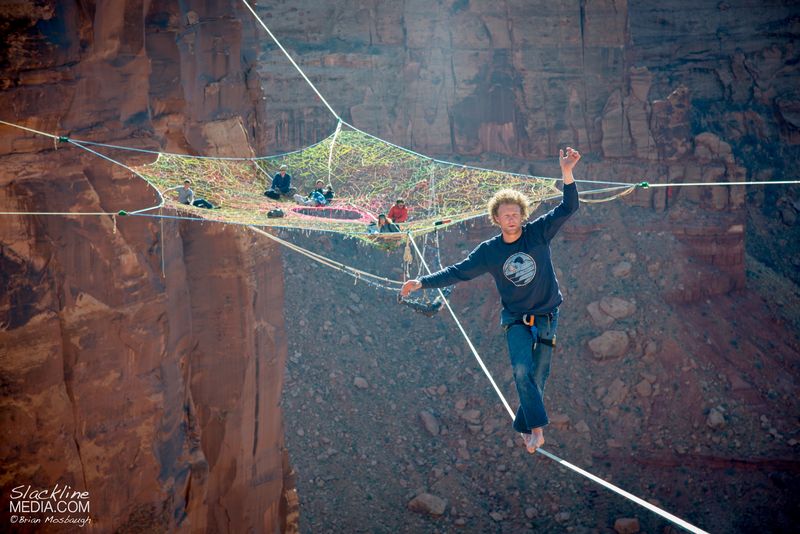 So the “Mothership Space Net Penthouse” was born and both groups found themselves working together as a team in order to rig and share the same air space of the pentagon shaped hammock which was suspended 400′ above the rocky desert floor. Highliners attempted to walk across the five different legs of the net, varying in lengths up to 80 meters long (262 feet), BASE jumpers leapt daily from the human sized hole in the middle of the net and paragliders made several flybys while dropping world-class wingsuit pilots from high above so they could buzz by over groups of friends hanging out in space. This upgrade of size to the space net concept was a massive scale up from the 2012 three sided “Space Thong” design, which was also shared by both groups but with less cohesiveness. A big undertaking during its time but clearly just the first steps toward bigger goals and dreams for one person in particular, Andy Lewis. 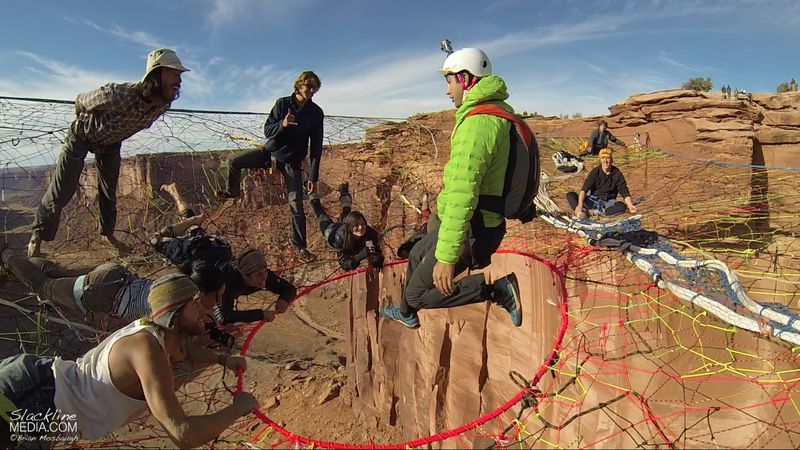 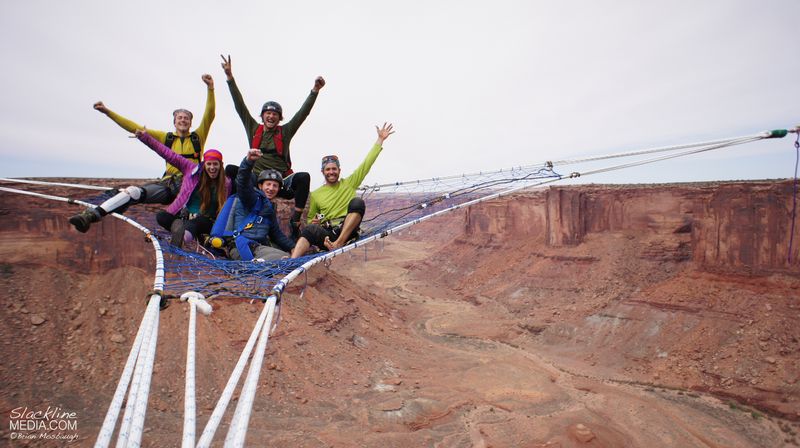 This all would not have been made possible with out the rigging genius of Andy’s progressive vision for constructing such creative and ambitious projects, alongside the huge communal effort it took to hand weave this net by more than 50 different BASE jumpers, highliners and friendly volunteers over a 3 day period prior to its one day installation in space. This was without a doubt one of the most unique Thanksgiving gatherings we’ve had out here in the Moab desert, where not one athlete was injured or maimed during the duration of such dangerous stunts. In the end everyone was very thankful for the new relationships and community that came together because of something bigger than any one person. We all eagerly await next years’ gathering as history has shown the progression of these sports coming together to create quite the vertical circus of new achievements never before thought possible or conceived…

Music: Let it Rain by Keys and Krates