Between September 6th-14th, the A-team, the organizing committee of the Highline Meeting 2014 along with the voluntary staff involved in the event will greet slackline lovers from all over the world on top of the Monte Piana, a site of natural beauty. The event held at 2,324 meters tall mountain laying in the Sexten Dolomites, Italy promises to be a creative meeting that invites participants to translate their moves into artistic expressions with a great help of emotions the South Tyrol's landscape creates.
29. 8. 2014 Comments: 0 Photos: 15

Following the success of the past years, numerous athletes are expected to attend, including some of the most known professional slackline athletes in the world, who will be coming to meet each other and exchange experiences. In fact, like every year, the spirit of the meeting will be non-competitive and oriented towards the respect and memory for the site. In addition to the sportive performances, the organizing committee aims to create an environment of awareness, where participants will feel involved in a "rediscovery" of the Monte Piana, living in peace for over one week on top of its peak at a height of over 2200 meters. As with previous editions, the organizing team will prepare a vast playing area: there will be highlines ranging from 6 to over 100 meters in length, for the full delight of both - professionals and beginners. For those who wish to contribute in any way, there are possibilities to set up various new lines for those with their own equipment. Thanks to the substantial support from the City of Auronzo, the Tourist Association of Auronzo and Misurina and the involvement of many sponsors such as Montura, Scarpa, Kiku, Redelè and especially thanks to the contribution of all the other technical and local supporters, this year's program will be enriched by many moments of musical entertainment, including various independent artists who blend well with the atmosphere of the Highline Meeting at Monte Piana. In collaboration with the Adventure Outdoor Fest, during one of the evenings, there will be screenings of the winning films of the festival held in San Candido last July. There will also be numerous on site professionals workshops from various fields: from acroyoga and meditation to guided walks rediscovering the trenches and the history that characterizes this special site. Each day will end with a moment dedicated to the contemplation of the sun in silence, in respect of those who previously lived and/or lost their lives at the top of the mountain. 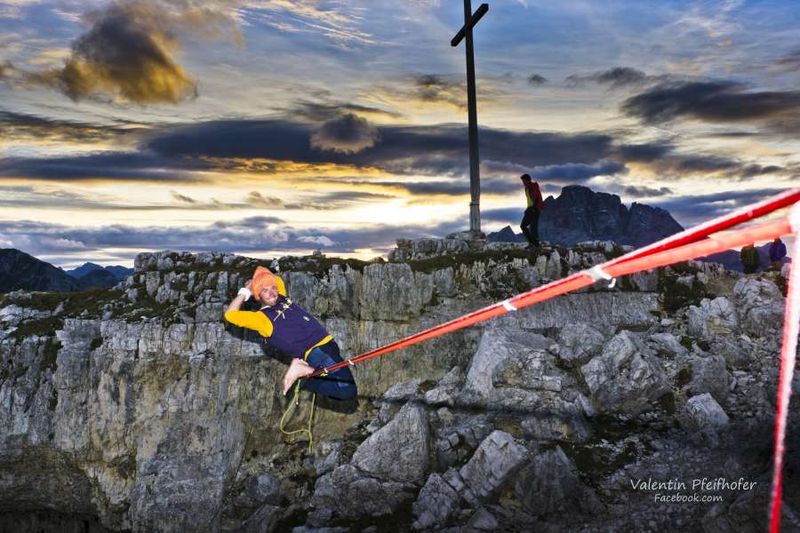 In collaboration with Despar (Sesto), Sperandio Butcher (Villa Villa), Fruit Centre (Auronzo), La Suite Wine Bar (Cortina d'Ampezzo), Rifugio Carducci (Bepi Monti), Ribotta Art Bar (Auronzo), Mangia La Foglia (Pieve di Cadore), Birra Dolomiti, Moser drinks, Happacher Bakery, Pasta Moro, Loacker, Stabinger, Seiterhof, Latteria Tre Cime and Sassolungo Rock Feeling, there will be an opportunity for participants to enjoy and taste some local specials. In addition to sharing the passion for sports, the whole meeting will be also approached in young highliners' philosophy of life: to walk up there is a form of respect for every emotion one feels in relation to one's own being, to one's own point of view. Thanks to the support of Ticket to the Moon we will attempt once again the record of mounting the largest number of hammocks on the highlines, and to spend in them an entire night together. The event will also be held under the sponsorship of Climb For Life, an organization actively involved in the campaign for the donation of bone marrow. Importantly, we would also like to thank the municipality of Cortina d'Ampezzo and the Civil Protection, who will provide some of the facilities for the base camp at the meeting place, as well as all the team of friends and volunteers who will be on site to greet participants with a smile. The event is organized by A-Team in collaboration with A.s.d and Le Lepri di Misurina. Alessandro d'Emilia, Armin Holzer, Aldo Valmassoi, Niccolò Zarattini and Nicolò Cadorin awaiting you on the Monte Piana to live together for a while on the mountain in a spirit of respect for its environment and history, and with an eye to the future, thinking that the Slackline it is not only webbing that joins tops of mountains but also different mentalities and cultures. Dear Ladies and Gentleman, on Friday, 5 November 2010 the Finals of the first Gibbon Slackline Contest took place as a part of the “Boulderfestival by Alpenverein Südtirol” – ending the first slackline world cup. 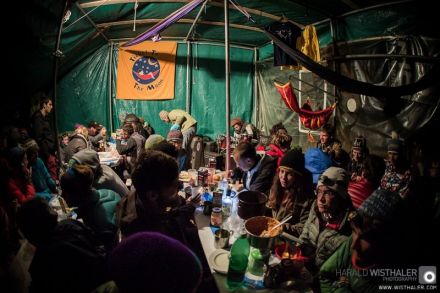 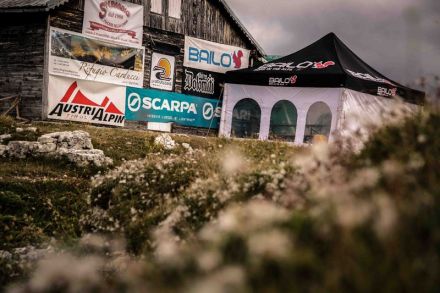 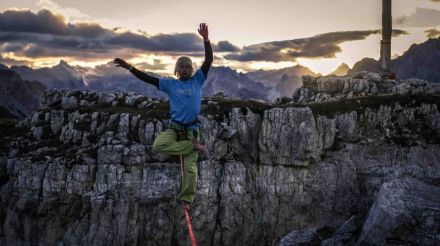 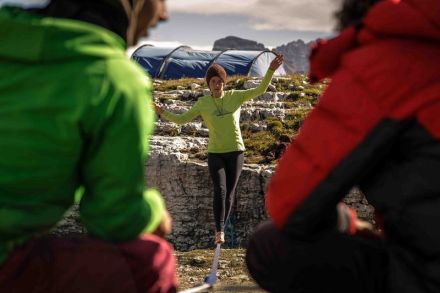 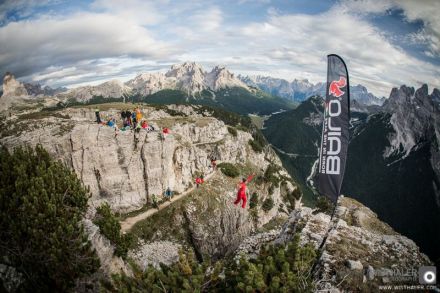