Things aren't always as they first appear. What seems like a perfect thing at the moment might turn out to be a disaster. Last year, Reinhard Kleindl, a professional slackliner from Austria, known among the community as Reini, traveled to Borneo to send a highline that looked spot-on but turned out somewhat harder than he thought. Not harder in terms of difficulty but rather in terms of strangeness of the setup. Something wasn't just right. Still, this line stuck in Reini's mind for long enough to share it with others. And here it is, a story from an unforgettable trip to the prominent Mt.Kinabalu.
10. 2. 2016 Comments: 0

Story by Reinhard Kleindl: It was the loneliest feeling I ever experienced. I was standing on a narrow summit of granite, balancing on the top. Around me was a grey, moonlike desert of solid rock, sometimes blank, sometimes carved to futuristic shapes by a glacier long gone. In the distance big tropical rainclouds rose from the sea 4000 meters below me. The clouds grew quickly and the strange, sizzling noise the rope made when I touched it convinced me that it was time to rappel down and leave this special moment behind. Tomorrow I would try to rig a highline from the exact spot where I was standing to another peak 60 meters away. It was the highline that I came for and the challenge that followed was an amazing experience for sure. But in retrospect it was that short moment alone on the pillar that somehow stood out. I never felt so small, so vulnerable before. So not in control but so sheltered at the same time. How strange that this pillar no longer exists. 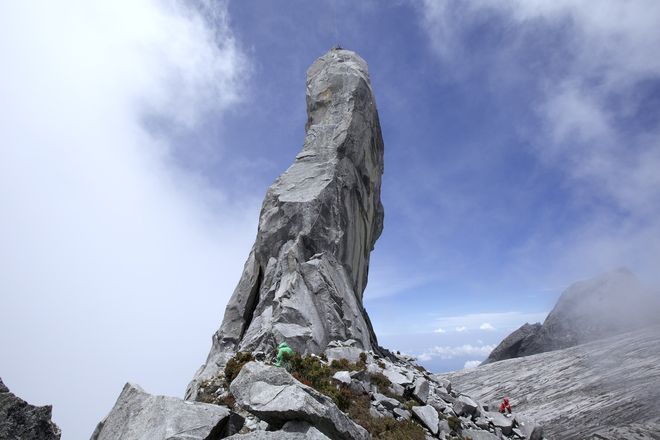 I first heard about Mt. Kinabalu in Malaysia when I met Dani Peis, this incredibly motivated Tyrolean climber. He was trying to organize an expedition and he asked me if I wanted to join him with my highline. When I saw pictures of the mountain I was blewn away: there were some of the most beautifully shaped rock pillars that I had ever seen. They seemed to be waiting for someone to set up a highline. But was it possible?

Highlining is a very simple thing – in principle: You pack your gear and go up as high as you can. You look for two summits that have the right distance. You connect them with a piece of webbing and walk from one to the other. The difficulty of the approach or of the line itself don’t matter that much. The most logical, most beautiful connection is what you are looking for. Very often, difficulty appears in a very natural way, as a result of beauty.

Or as a result of sheer size: How big were these pillars? I struggled to find any more information about this rock formation called "Donkey Ears", their exact location or the approach. I read that this mountain had several summits, all roughly the same height. The „Donkey Ears Peak“ was one of them but I didn’t find information whether it had been climbed before. And I realized that the rock looked steep and totally blank. Very hard to say if these structures were climbable – without drilling your way to the top. I told Dani that I was fascinated but that I was not sure about the whole thing. Lots of doubts considering this would be my first big international project.

Still we kept planning. We found out that the pillars had in fact been climbed. That was good news! Usually this means that the project is on. But what if you find out that the routes were bolted by guys like Daniel Woods, Yuji Hirajama, James Pearson and Caroline Ciavaldini? In that case you should better be a strong climber. When I got on board an A380 to Singapore a few weeks later I still knew little about what I had to expect. One big problem was the fact that I still didn't know the distance between the two peaks. Estimates ranged from 40 meters to 80 meters. It makes a lot of difference in terms of gear and you can’t just bring all your equipment by plane.

After arriving in the city of Kota Kinabalu, meeting the rest of the team, enjoying some first Malayisan impressions and spending the night in a hotel without windows, we went straight to the mountain, still jetlagged and bursting from motivation. A bus ride took us up to about 2000 m above sea level. From there, a nice hike through the jungle of Borneo lead up to about 3000 m. The forest ends here and for the rest of the way we had a clear view. The Donkey Ears were right in front of us and they looked big. Much bigger than I had imagined. 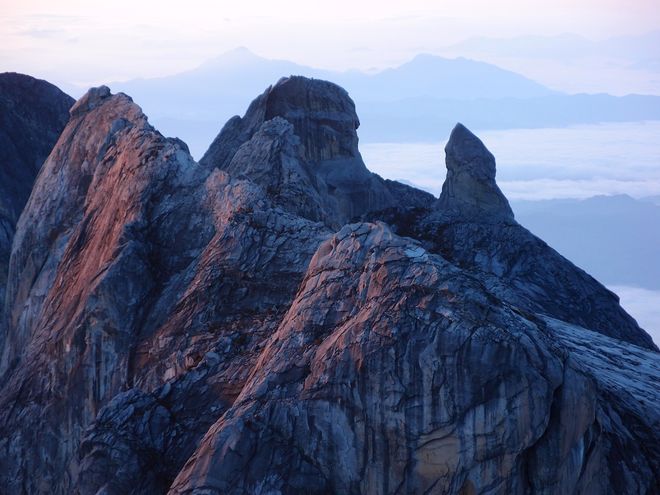 Some members of our team had problems with the altitude and stayed at a hut half way while the rest of us went on to the last hut at 3700 m which would be our camp for all further explorations. A local guide gave us a warm welcome and we enjoyed one of the best sunsets I have ever seen. I was lucky. Most of the team had problems sleeping due to the sudden change of altitude but I slept like a baby. On the next morning we packed our climbing gear and headed out just before sunrise. Our goal was to climb the pillars and check out the project. Was it possible? Did I bring the right highline gear?

The climbing in this perfectly shaped granite was a lot of fun. Two pitches took me and Dani to the top of the smaller pillar. When I finally measured the distance with my laser I was excited: The distance was 60 m, just right! And there was a ledge on the other pillar just where I wanted it to be. My palms began to sweat. The project was on. 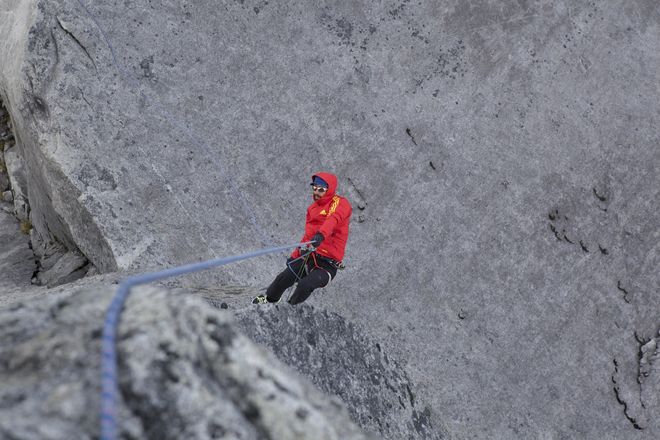 From there things started to get difficult. The other pillar was much harder to climb and we had to ascend an old techno route on bad pitons under loose and hollow flakes. Both Dani and I were very relieved when we finally reached the summit of the other tower after two days. Every afternoon, the clouds came in and we had to rappel down to escape from the tropical thunderstorms.

I don’t want to go into too much detail about the technical difficulties of the highline setup. The problem was that we weren’t allowed to add new bolts due to our permission from the National Park. It’s a matter of respect to keep to regulations like this. So I improvised, used pitons and existing bolts, making use of all my experience and my knowledge as a physicist to calculate the forces on each piece of equipment to be sure it wouldn’t break. I realized how bad I wanted this line and at the same time I knew that I wouldn’t force it at any price. Abandoning the project is always an option if the setup is not perfect. Even here. Especially here. But the decision was made: The setup was safe enough, I would go for it. When the line was ready and I finally tied into the leash for my first attempt I felt tired but confident. I knew that I was fit enough for this line. I was wrong. 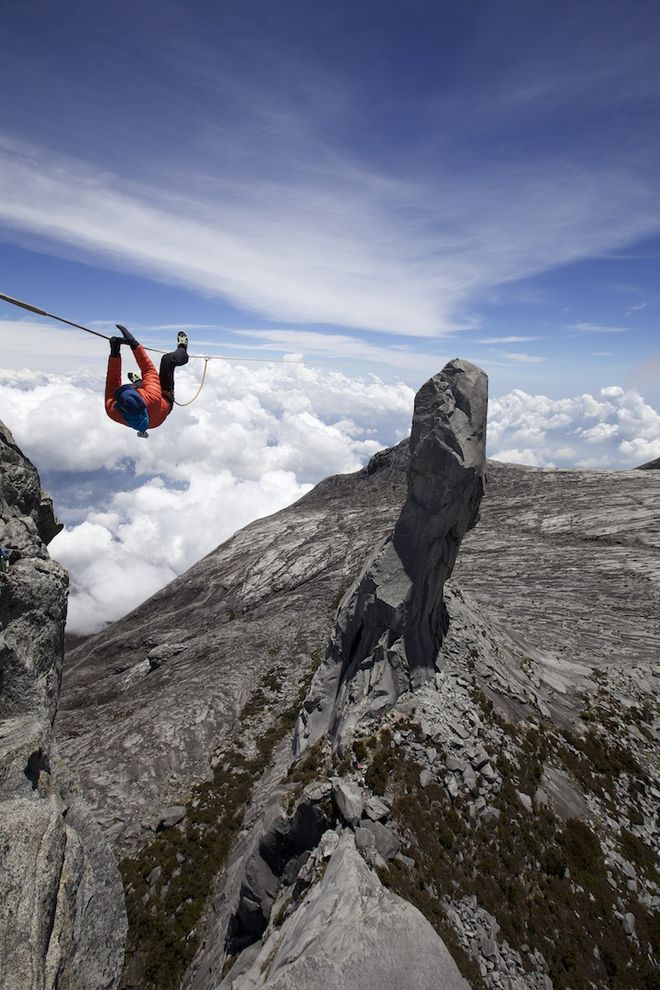 The strange, unconventional setup and the altitude took their toll and I wasn’t even able to cross the line with falls on my first go although I gave it my all. A disaster. Highlining can be great fun but this line was not. It was beautiful, the spot was perfect and I wanted to be the first to send it but I really had to fight for it both physically and mentally. A few hours later I walked it in one direction at my limit, using all my experience and tactics. It was the only send I made on this line. Just in time: Rigging had taken us longer than expected and we had to take the line down on the next day, leaving us enough time to celebrate and enjoy our last hours on the mountain. Perfect timing. 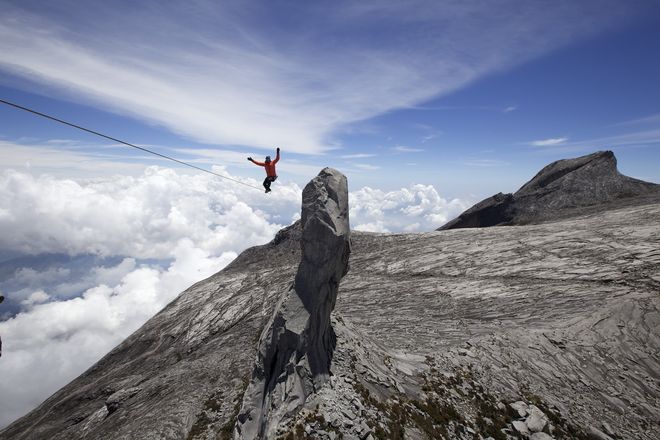 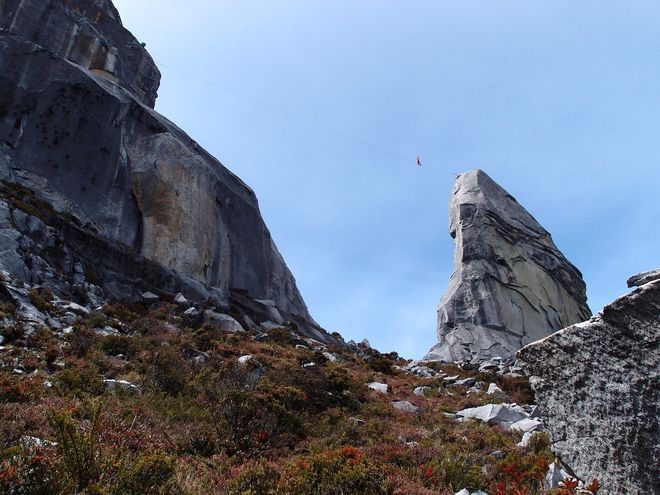 Walking this line was very satisfying for me. More satisfying than other lines that I really enjoyed walking on, in contrast to this one. Maybe it’s because of the bad setup and the need to make conscious choices that my life would depend on. Or because things you have to fight hard for are just more satisfying. I don’t have a definitive answer. What I do know is that this send was a once in a lifetime opportunity. Last year a strong earthquake hit Borneo, destroying many of the paths we used to climb the mountain. The paths have been fixed by now but the biggest damage will never be undone: The Donkey Ears Peak is no longer there. The smaller tower, the one you see in the beautiful pictures Dani took, collapsed. When I sent this line I was wondering who would be the first to repeat it. I love this idea of setting up classic lines and repeating them. One of my best highline experiences was repeating the classic highlines in Yosemite valley last year, especially the one on Lost Arrow Spire, the first alpine highline in the world, walked by Scott Balcom in 1985. Sadly, the donkey ears highline will not be repeated.

Reinhard Kleindl is sponsored by Elephant Slacklines, AustriAlpin, Chillaz, and Gleistein. And you can follow him on his FB too.