Slightly Different Spelunking - Descent into the Lava of Marum

Ambrym, the most voluminous active volcano in Vanuatu in the South Pacific with 48 eruptions since 1774 is a massive, 1900-year-old, 96 square meters caldera and home of two active volcanic cones, Benbow and Marum. The last eruption inside the later cone was in 1953. They have done it before (2010) but this time the adventurer photographers Geoff Mackley and Bradley Ambrose were joined by the GoPro production crew to show potential of their new, incredible 4K high-resolution technology. Watch as they set their foot at the very edge of Marum Volcano's famed lava lake.
29. 10. 2014 Comments: 0

Getting to Marum could be compared to a reverse climbing of Everest. If the weather is bad, the whole trip into the raging, most active and most dangerous volcano on Earth can be quite challenging - tremendous heat from the lava, descending and ascending 400 meters of near vertical, loose rock face, acid rain so strong that it could have come from a car battery, and a variety of other craziness. Plus, one slip and you are history. 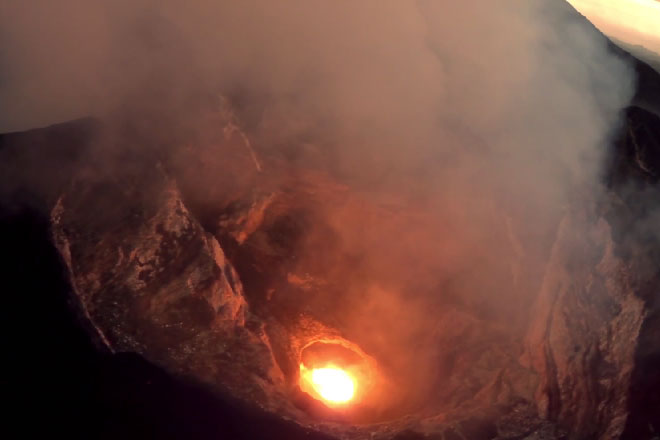 After abseiling down into the crater of Marum volcano, the crew encountered an amazing sight of Marum's boiling lava lake. Coming within 30 meters of the lava lake down a watercourse, one can stand the heat for only 6 seconds but with Fire Brigade breathing apparatus and heat proof proximity suit it was possible to stand on the very edge and view the incredible show for over 40 minutes. Check it out.