The US athlete edged out close friend and fellow American Steven LoBue to claim the win by a margin of just 2.40 points - 469.40 points to 467.00 - at a sweltering Lake Garda where 18,000 spectators were treated to a series of spectacular 85kph freefalls as 15 athletes dove 27 metres from a platform positioned on the centuries-old walls of the Scaliger Castle.
17. 7. 2013 Comments: 0

"It couldn't have happened at a better time or in a better way," said 24-year-old Colturi. "For my girlfriend to be here, for Steve to be second in this amazing place in Malcesine, on Lake Garda, it's just a dream come true. You're never going to win a Red Bull Cliff Diving event without hitting all four dives and that's been my goal to put together a full list. I've had a couple of good ones, like in Boston last year, but it's finally come together. I've got a new dive down too and there's more to come!"

Colturi's new dive, a back triple somersault with three twists, saw him take the lead during the third of four rounds of cliff diving and he stepped up to the platform for the last dive of the day knowing that if he hit it he would claim his first win in his 12th World Series competition.

One reverse double somersault with four twists from 27 metres later and Colturi, who's from Ann Arbor, Michigan, and divides his time between cliff diving and his work as a lab technician, was celebrating a victory that propels him into a select group of athletes - Orlando Duque, Gary Hunt, Artem Silchenko and Steven LoBue - who have won a World Series event.

LoBue's new quint half dive, with a very high Degree of Difficulty of 6.1, helped catapult the Fort Lauderdale-based diving coach into second place.
Hunt's third-placed finish, meanwhile, extended the three-time World Series champion's lead in the overall rankings. Duque's fifth place and Silchenko's defeat in his head-to-head against Anatoliy Shabotenko saw the pair lose ground on Hunt in the battle for the 2013 World Series.

Spectators were treated to a diving fest over the weekend, and Saturday witnessed the first-ever women's competition in a sport that continues to raise the bar. Now, after the most intense period of the season, the athletes have chance to regroup before the next World Series stop in Boston, USA - the fifth of eight different locations on this year's calendar - on August 25. 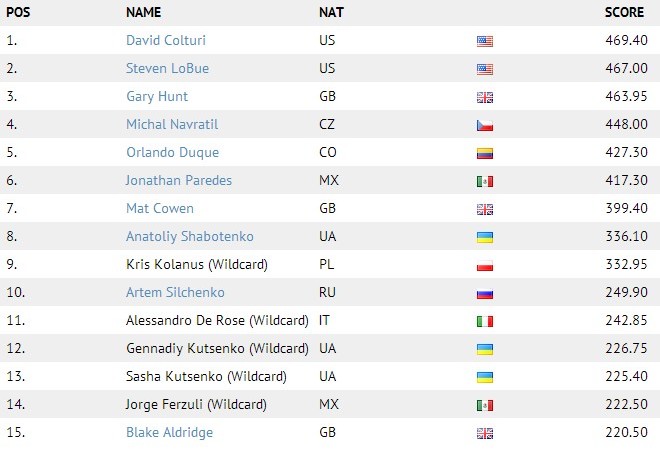