11th year of the Czech Republic open championship in water jumping will take place on July 30th and 31st, 2010 in a natural quarry near Příbram that has been a traditional destination of this extreme sport fans since the first year of the championship back in 2000.
14. 7. 2010 Comments: 0

This year the original Czech competition will present the latest technologies from the workshop of the general partner QUIX, bringing the competition into a multimedia reality.

A clash of top jumpers in three disciplines (freestyle jumps from 12 and 16 meters high tower and 5 meters high swing) will be a breathtaking spectacle with demanding flips, twists and other acrobatic stunts. Brave representatives of general public may enjoy the adrenaline jump including the smashing landing. This year the visual enjoyment will be even higher because of detail shots from camera placed on a mini helicopter monitoring each jump precisely.

Immediately after landing each jump will be recapped on LED screen right next to the jump tower. Compared to standard purely cultural or sporting events Highjump program is unique by combining both these elements in a single event. Every evening the sporting event will fluently convert into a fest party with quite attractive line-up. There will be four stages to guest artists such as Navigators, Natalie Kocab, Indy & Wich, Kapitán Láska, Plexis and many more. The environment of the extensive natural resort offers wide range of individual amusement. Besides refreshing bathing, sun-bathing and other beach activities the visitors may try a rare attraction such as "Event Bubbles" - balloons imitating walk on water surface, or a unique laser graffiti show - a tagging by laser pointer. Another enjoyable event will be PIT BIKE FMX Show by crazy members of 50ROCKS group. Moreover you will see a freestyle motocross you have never seen before. For your comfort and satisfaction of your needs there will be a lot of great food and drinks all over the site. As usually you can park and tent directly in the site.

A domestic celebration of the sporting discipline known worldwide as cliffdiving has been more and more popular amongst Czech public which is obvious from the attendance increasing heavily year after year. A great reputation of Highjump has leaked abroad which makes this competition rather an international event in terms of jumpers and fans origin. Last year competition gained a huge attention of public because of the exhibition of the absolute legend of cliffdiving - Orlando Duque from Columbia. He was so excited about the event that he came with a proposal to come again this year with even more competitors from the most prestigious jump competition in the world. Besides a competition in traditional water jumps, QUIX Highjump 2010 will present to the audience that is hungry for the craziest visual adventures the most extreme branch of cliffdiving known as SPLASHDIVING - the most attractive show of bizarre stuns you could ever imagine. We would like to thank to main partners of the competition: QUIX, Adio, JUMAR s.r.o., MTV, Evropa2 and Mladá Fronta, as this competition would never have been possible without their support. Visit www.highjump.cz for more information. 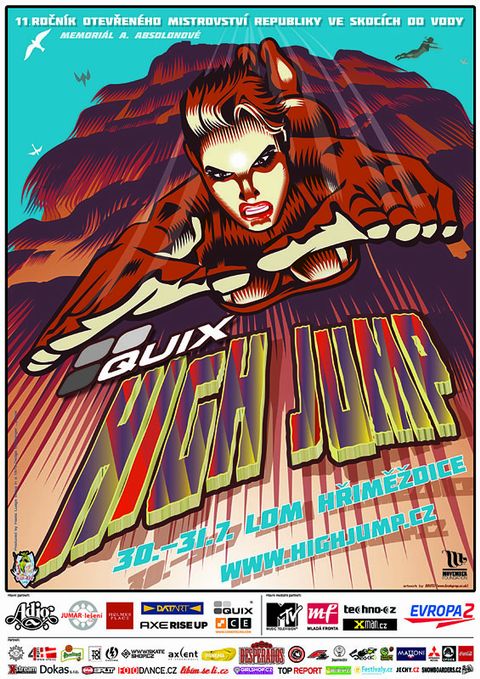