With athletes from forty countries taking part in the last World Cup Stop of 2015 in China, the spectacular scale of just about everything in the area was truly breathtaking! Hot sunshine followed by windy Typhoon conditions pushed the athletes to their absolute limit. This created a very exciting weekend for all. Shanghai, the world’s largest city with a population of 24 million, hosted the 45th World Cup Stop of the International Waterski & Wakeboard Federation (IWWF). With 480 million Chinese residents leaving home for the seven day Golden Week holiday, several million thronged Shanghai’s famous Nanjing Road and The Bund Waterfront. Over 7.5 million travelled on Shanghai trains alone.
8. 10. 2015 Comments: 0

The final competition of the season featured both Wakeboard and Jump at the impressive Bi Hai Jin Sha Water Park in Fengxian District. The Park is located within the unique Shanghai Haiwan tourist area with its pure recycled water and clean imported sandy beaches.

In the Open Ladies Waterski Jump Prelims, it was clear that this would eventually be a battle between current World Record Holder Iryna Turets (BLR), past World Champion Julia Meier-Gromyko (BLR) and Psychoanalyst Alexandra Gibinska (RUS). Gibinska also holds the Russian Cable Jump Record of 47.7m. While the earlier round had perfect weather conditions, a howling gale and very choppy water greeted the Finals. Gibinska crashed on her first attempt but finished somehow with a magnificent 44.1m distance. Turets got close with 41.4m. So it was all down to the most experienced of all, Meier-Gromyko. Her first attempt gave a distance of 39.4m. Having to beat 44.1, her second jump brought a gasp from the spectators as she went for broke. Unfortunately, a spectacular crash which ended with a broken helmet, minor neck strain and sore ribs prevented her from improving! This was a day only for the very brave. Gibinska took the well-deserved Shanghai World Cup gold medal, followed by Turets and Meier-Gromyko. 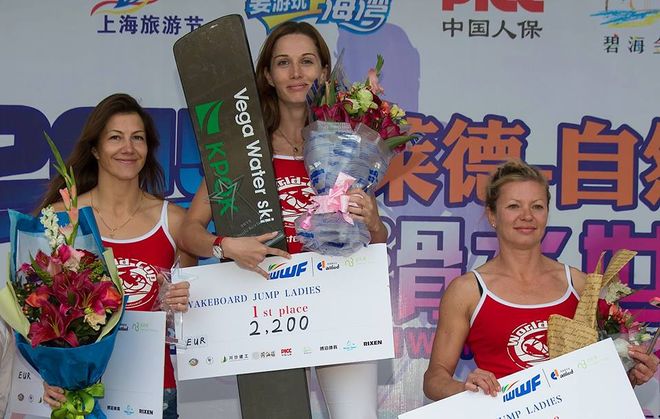 Having watched the Open Ladies cope so well with the severe weather conditions, the pressure shifted to the Open Men to prove they could do likewise. Many did not. With five spectacular crashes and seven Jumpers opting to pass on various attempts, this created a thriller for the spectators and a nerve wracking Finals for the men. Early in this Final segment, Bavarian Marius Schimanski (GER) stunned all with a distance of 50.3m. It seemed almost impossible. Vladimir Ryanzin (RUS), 15 time National Champion, shocked all as he crashed no less than three times but escaped with just a few bruises. At the end of the second jump segment, Europe Africa Champion Kamil Borysewicz (POL) again did the impossible by mastering the windy conditions with an extraordinary distance of 53.5m. With two competitors now exceeding that 50m limit, only Nikita Papakul (BLR) could get close with a distance of 48.1m. As Borysewicz, Schimanski and Papakul made their way to the beachside IWWF World Cup Podium, all were in awe of the high level of skill and bravery exhibited by both the Open Ladies and Open Men at this spectacular World Cup Stop. In Wakeboard, very strong winds continued, favouring the top most experienced Riders. In Open Ladies, early shocks included losing past World Cup winner Cosima Giemza (GER). In her first World Cup appearance, Melissa Colborne RSA impressed all falling just short of a Podium place. Two battles in the Finals produced some great riding. Sophia Reimers (GER) set the scene. Her great run included an S Bend to Blind, Inlake Back Mobe and Backside 3 off the Kicker. Past World Cup winner Maxine Sapulette (NED) responded with a similar run but included a Front Board 270 on the Fun Box to finish with a Scarecrow to score 75.0. The final battle was between superstar Julia Rick (GER) and Sanne Meijer (NED). Rick was stunning. Her run included a 90210, Backside 313, very big Front Flip to Blind with a Tail Grab, Backside 270 and on to a 270 Out on the Funbox to finish with a backside 5 off the Kicker. Her score of 85.33 was well deserved. Meier tried very hard to catch up with a double S Bend but a sloppy landing disrupted her run and she had to settle for second place behind Julia Rick and ahead of Maxine Sapulette. 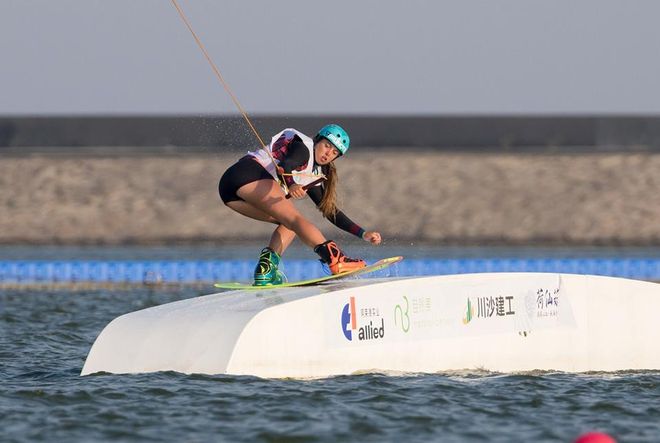 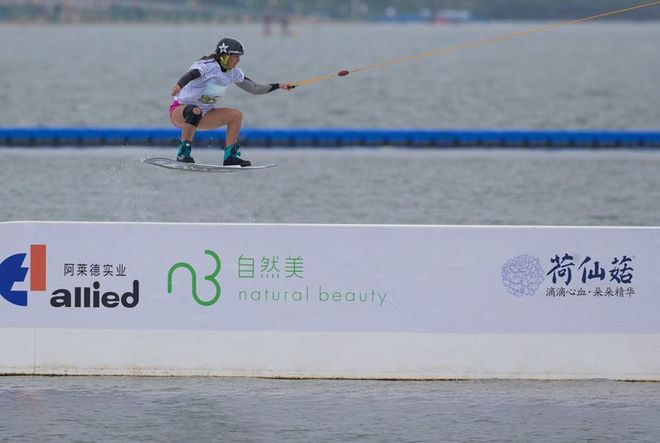 Open Men Wakeboard saw the strongest winds of all. Lior Sofer (ISR) and Im San (KOR), both hot favourites, failed to make it to the Finals. Timo Kapl (AUT) looked strong earlier having practiced 317s beforehand but it did not work for him when needed. Eventually, it was a battle between Israel’s Guy Firer, Christopher Klein (GER) and past World Cup Champion Dominik Guhrs. For pure consistency in any weather conditions, Guhrs is a phenomenon. Firer’s score of 79.67 was not enough to get ahead of Kelin’s 82.00. However, even as he took to the water, Guhrs appeared not to even notice the howling gale! His winning run included a 315, Inlake Back Mobe 5, Heart Attack, Batwing to Blind, Skeezer and his best hit on the Funbox with a Toeside Backside 450 was enough to give him the World Cup Title – ahead of Christopher Klein and Guy Firer. 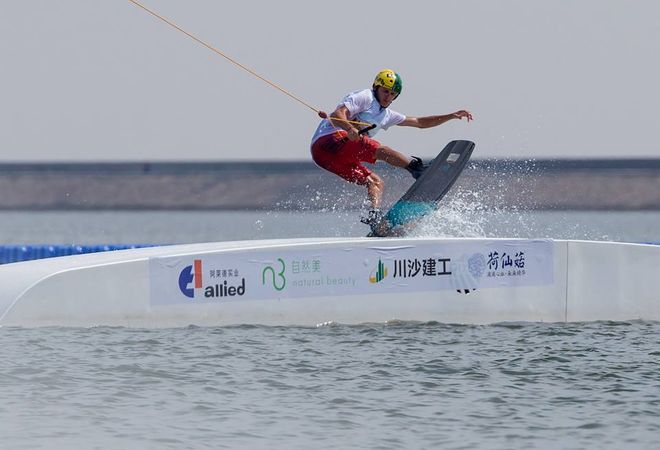 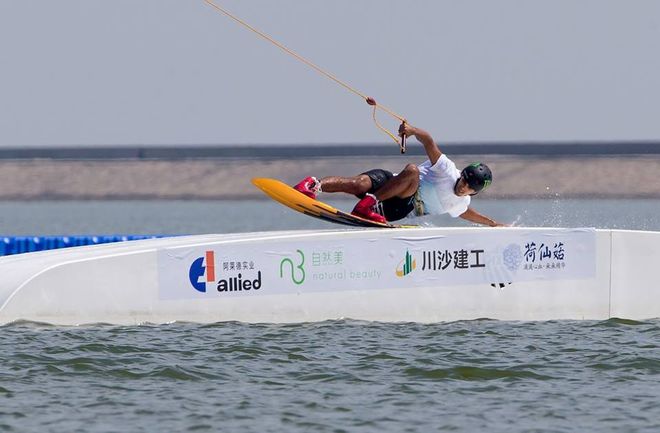 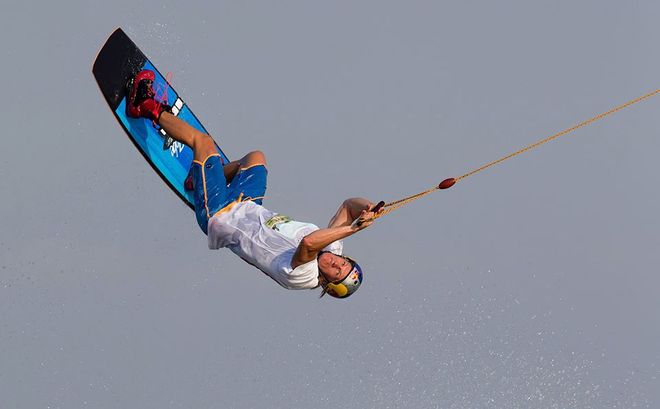