To have five male and six female World Record holders in Waterski Slalom, Tricks and Jump chasing the coveted title of World Champion was a guarantee of a spectacular contest. Taking place at the perfect Boca Laguna Ski Club site in Chapala, Mexico, the highly successful Wakeboard World Championships took place there recently and with glorious sunshine and perfect water conditions prevailing all week long, it was without question this event will be one to remember. In Slalom, crowds were facing what could be the greatest World Championships line-up of the decade and three well established records were created.
24. 11. 2015 Comments: 0

Athletes from thirty countries faced two unusual challenges in Slalom, Tricks and Jump. At an altitude of 5,000ft/1,500m, both the skiers and MasterCraft boats battled well with the thinner air. The water in the beautiful man-made lake also contained more natural yellow sulfur than many had previously experienced. This created slippery surfaces on gloves and equipment. To be better prepared some athletes trained in advance for these challenges. Throughout the weekend, the younger athletes coped well and made an enormous impact on these Open Championships often causing a sensation in defeating some well-established household names in the sport. 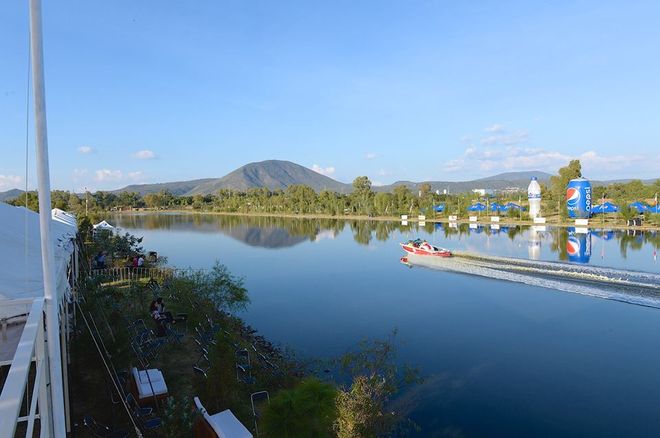 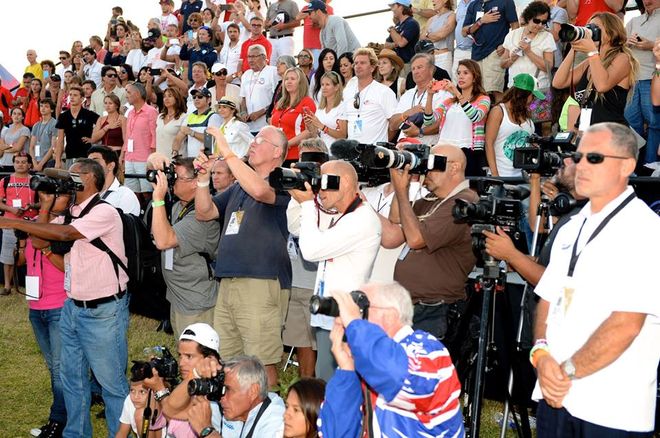 In Slalom, Nate Smith (USA), current world record holder and also the defending world champion, was last out. What a prospect! Altitude and yellow sulfur water proved no obstacle for him. With six major titles already achieved this season, this extraordinary athlete from Indianapolis, Indiana, successfully defended his 2013 title here with a score of 2.5 buoys on the 10.25m line. Thomas Degasperi (ITA) took the silver medal and following a run-off, Freddy Winter (GBR) beat newcomer Joel Howley (AUS) for the bronze medal. 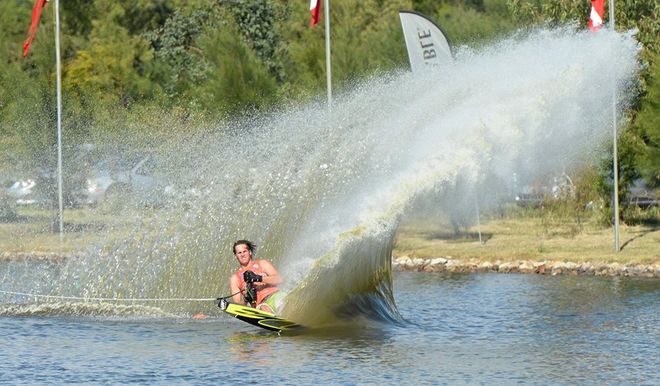 The Women’s field of Slalom Skiers saw the final battle between the super-star of the decade, Regina Jaquess (USA), who almost set a new World record here (she was just 2.25 buoys short of her World Record), Whitney McClintock and young challenger Geena Krueger. Despite Canada’s Whitney McClintock's huge effort, her score of 2.5 buoys on the 10.75m line was not enough to beat Jaquess and she had to settle for silver with the young challenger Geena Krueger taking bronze. 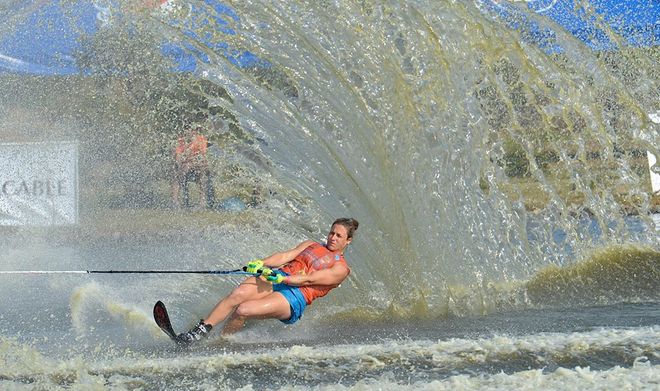 In Tricks, the young guns really caused a sensation. The Women’s Final included all the super-stars but nobody else could do better till 15 year-old Anna Gay (USA) and 14 year-old Neilly Ross (CAN) entered the Boca Laguna Waterski Club arena. Anna Gay not only set a new personal best score of 10,010 points but also set a new World Championships Record at the same time – all at just 15 years of age!  Her close friend, fourteen year-old Neilly Ross was last out. Her score of 9,500 points was enough to take the silver medal with the bronze going to Natallia Berdnikava with 9420 points. These two teenagers are destined to dominate this sport for a generation to come. 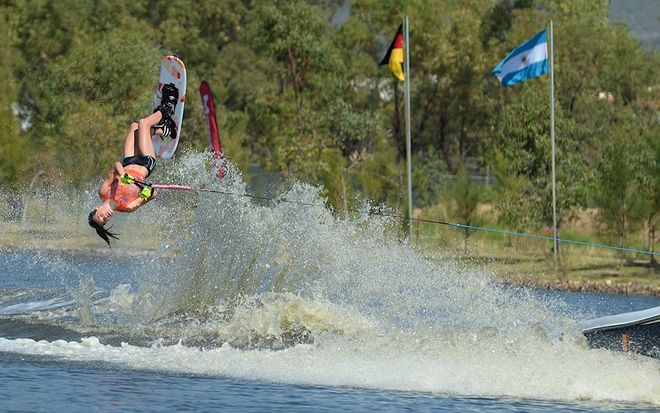 As in Women’s Tricks, again the young guns were devastating. With a score of 10,990 points, Junior World Overall Champion, twenty year-old Josh Briant (AUS), took the bronze medal. PanAm Games Champion, twenty four year-old Adam Pickos (USA), then made history by becoming the second member of his family to be crowned World Tricks Champion. His International Hall of Fame father Cory was there to watch Adam post a winning score of 11,210 points – ahead of Adam Sedlmajer and Josh Briant. Czech rider and Overall contender Adam Sedlmajer was not only great in Slalom but sensational in Tricks as well. His score of 11,050 points was not just a Personal Best but also have him the Tricks Silver Medal and maximum Overall Tricks points which he had already achieved in Slalom.

For the Women’s Jump event, the desired head wind arrived in time. There was drama from the very start. The defending champion Jacinta Carroll, had a painful broken toe. Putting on those tight Jump Ski bindings was torture for her but Jacinta not only took the gold medal but also set a new World Championships Jump Record of 57.6m. What a performance from this Australian twenty-three year-old athlete from Geelong in NSW, one of the most courageous jumpers of her time! 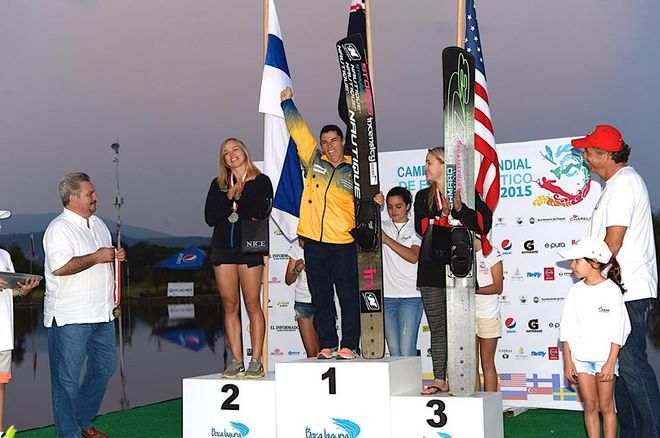 In Men’s Jump, water conditions were good but that much needed elusive head wind had gone. Russia’s Igor Morozov was in the lead at the half way stage with a distance of 64.5m. Past World Overall Champion, Felipe Miranda (CHI), then raised this to 65.5m. Next out was a true legend in the sport, Jaret Llewellyn (CAN). With a staggering 15 World titles and 11 World Records to his credit, at the age of 45, his consistency and levels of fitness have been exceptional. On his first jump, his speed to the Jump Ramp indicated that he was there to take home a title. To the horror of the spectators, having lost his position in the air, he crashed with enormous force. The rescue crew were quickly on the scene and he was taken by ambulance to a hospital in nearby Guadalajara where he had surgery for a broken femur. All on site were understandably shocked and with three jumpers still on the dock, Thomas Asher (GBR) dug deep to post a distance of 65.0m with Felipe Miranda still in the lead with 65.5m. Europe Africa Jump Record Holder Bojan Schipner (GER) then responded with 66.7m to take the lead. Last off the dock, US Masters and World Cup Champion Ryan Dodd (CAN), now had to beat this 66.7m to take the title of World Jump Champion. This he did with a sensational 67.3m on his first attempt. In an emotional ending to a truly great 2015 World Waterski Championships in Chapala Mexico, Ryan Dodd asked all to pray for a quick recovery for his team-mate and legend Jaret Llewellyn. In the Overall battle, mastering the very different skills of Slalom, Tricks and Jump seems impossible to most in the sport.  At the elegant closing banquet, Adam Sedlmajer (CZE) and Regina Jaquess (USA) were crowned World Overall Champions. The Team Awards went to 1. Canada, 2. USA and 3. France.