According to experts, less than one percent of the recreational diving population possesses the knowledge, skills, attitude and judgement needed to cave dive as safely as possible. That might be the reason for relatively high number of fatal accidents that happen in underwater caves. If you consider ever exploring some cave yourself, you might find useful this instructive article written by experienced cave diver Johnny Richards.
5. 3. 2014 Comments: 0

North-central Florida's crystal-clear, underwater caverns and caves are among its most popular attractions for visiting divers. When divers use common sense and follow important safety rules, diving these overhead environments can be nearly as safe as diving in open water. However, when divers fail to follow these rules, the results are often tragic. Since 1950, nearly 400 divers have perished in Florida's caverns and caves. The vast majority of these divers had no formal training in cavern or cave diving.

In the 1960s and 1970s, cave diving pioneer Sheck Exley conducted a careful study of cave diving fatalities. What he discovered was that, in virtually every instance, the victims' demise could be attributed to one or more of just three direct causes. Later, National Speleological Society Cave Diving Section (NSS-CDS) Training Chairman Wes C. Skiles identified two additional factors that, while not directly responsible for divers' deaths, nonetheless contributed substantially to most such fatalities.

Together, the findings of Exley and Skiles form the basis for what cave divers know as the Rules of Accident Analysis. These five rules form the basis for all modern cave diver training. They are something of which every diver who visits this unique area should be aware. This article provides a synopsis of these rules. (And, in the tradition of Late Night with David Letterman, we'll work from the bottom of the list to the top.)

5: Use Three Sources of Light

Although vastly improved over early designs, underwater lights remain among the least reliable of all dive equipment. Even for top-of-the-line models, the question is not whether a dive light will or will not fail but, rather, when. Being caught in the total darkness of an underwater cave, due to light failure, is not fatal in and of itself. Nevertheless, it has been a major contributory factor in several cave-diving fatalities. Loss of sight, due to light failure, contributes substantially to disorientation and a sense of panic. Panicky, disoriented divers often make mistakes that divers who can see do not. 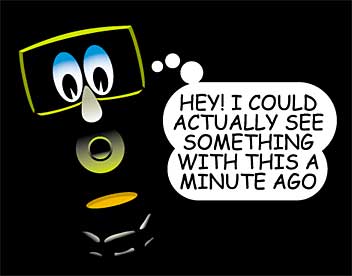 Divers blinded by loss of light will have difficulty finding the continuous guideline that leads to the cave entrance (assuming they were wise enough to use one in the first place). Even when lightless divers are in physical contact with such a guideline, it will most likely take them substantially longer to reach daylight than it would were they able to see. At this point, the question becomes whether each diver has sufficient breathing gas to make it to the exit, when moving at such a slow pace.

Because of the hazard that loss of light presents, we teach cave divers to carry at least three battery powered dive lights — one primary light and two back-ups apiece. Cavern divers, who keep the cave entrance in sight at all times, learn to carry at least one primary and one back-up light each (the sun counts as their third light source). Although almost every cavern or cave diver eventually experiences a dive light failure, the odds that all members of a buddy team will experience a triple light failure are astronomically slim.

4: Remain Within the Operating Limits for Your Breathing Media

Although only one in ten cave diving fatalities involves certified cave or cavern divers, 90 percent of these fatalities take place on dives in which participants expose themselves to an Equivalent Narcotic Depth(END) of 130 feet or more. At these depths, factors such as nitrogen narcosis, high partial pressures of carbon dioxide — and physiological mechanisms that experts have yet to understand — can either lead directly to a diver’s demise, or contribute substantially to his or her death. 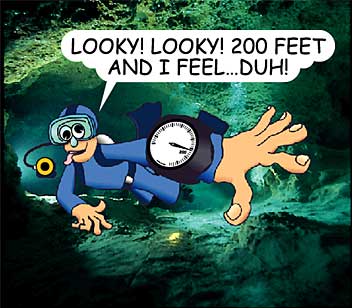 For these reasons, the major cave-diver training organizations recommend that divers remain within a limiting PO2 of 1.4 atmospheres while diving, and 1.6 atmospheres during decompression. They further recommend that divers not exceed an Equivalent Narcotic Depth (END) of 130 feet. In so far as experts believe both oxygen and nitrogen have the potential to cause impairment at depth, this mandates the use of Trimix (a combination of nitrogen, oxygen and non-narcotic helium) at depths below 130 feet.

It is important to note that, while small groups of highly trained, highly experienced cave divers are currently exploring cave systems at depths exceeding 300 feet, the average recreational cavern or cave diver can spend a lifetime exploring north-central Florida’s more popular dive sites and never have the need to exceed a depth of 130 feet.

3: Keep Two Thirds of Your Starting Gas in Reserve to Exit the Cave

Over the years, there have been a number of cave-diving fatalities in which the victims either knew the way out, or had a good chance of finding the way out. They simply did not have sufficient breathing gas to make it.

Recreational divers, in particular, tend not to think about surfacing until the pressure in their cylinders drops to between 500 to 1,000 psi. This may seem like a no-brainer, but if divers use 2,000 psi or more to penetrate a cave, it is going to be very difficult to exit that cave on 1,000 psi or less. Should you factor in the unforeseen (loss of visibility, the need to share gas with other divers, etc.), the odds of divers surviving under such circumstances are exceptionally slim. Trained cave divers learn to keep at least two thirds of their starting gas volume in reserve to exit. To date, this “Rule of Thirds” has proven to provide a sufficient safety margin — even in instances where divers’ exits have been slowed by poor visibility or momentary loss of contact with the guideline, or when gas consumption has increased, due to apprehension or the need to “share air” with another diver.

2. Maintain a Continuous Guideline to the Cave Exit 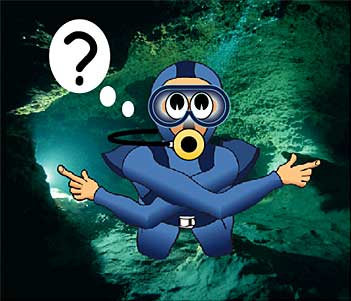 If there is a single word that best describes the layout of most north-central Florida cave systems, it is “maze.” Many cave diving accident victims assume they are swimming into a single, sewer-like conduit. Imagine their shock when, upon turning to exit, they discover multiple passageways behind them — and that which passage leads to safety is not always clear.

Compounding this problem is the fact that divers who lack training in ultra-precise buoyancy control and anti-silting propulsion techniques, which cave diver courses provide, often leave a trail of poor visibility behind them. Disoriented divers frequently assume that swimming into clearer water will lead them to safety. Ironically, doing so in a cave will tend to lead them further from the entrance.
In a substantial number of cave diving fatalities, the victims actually had sufficient breathing gas to exit, when at their furthest point of penetration. However, because they could not locate the exit, they squandered that gas before reaching safety.

This is why among the most important of all cavern- and cave-diving safety rules is running a continuous guideline that will lead divers directly to the cave entrance. Even though the maze-like configuration of many north-central Florida caverns and caves may momentarily deceive divers, properly used guidelines don’t lie.

1. Be Trained for Cave Diving; Remain Within the Limits of Your Training

Amazingly, the one thing nine of ten diving accident victims have in common is the lack of formal training in how to dive this unique environment in as safe a manner as possible. And, because they lack such training, many victims are simply unaware of the need to carry sufficient lights, follow the Rule of Thirds or run a continuous guideline from the cave entrance. 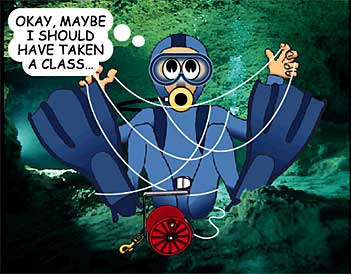 Even in those instances in which accident victims had formal cavern or cave diver training and certification, death more often than not resulted from divers exceeding the limits of their training. Cave Diver training, in itself, does not prepare divers for depths in excess of 130 feet. Yet, in nine out of ten trained cave diver fatalities, the victims were diving below 130 feet, on air. Go figure.

If you choose to enjoy the spectacular beauty of north-central Florida’s caverns and caves, you can achieve the highest possible level of safety by enrolling in a minimum of a two-day Cavern Diver course, and employing the knowledge, skills and experience you will acquire as part of that training. Barring this, you should limit your diving to commercially operated sites, such as Ginnie Springs, Devil’s Den or Blue Grotto, which cater to “ordinary” recreational divers, or to state parks, such as Peacock or Manatee. Even here, it is vitally important you follow all the safety rules imposed by the site’s or park’s management.

If you find yourself diving elsewhere in this area, your best bet is to not carry or use a dive light. Doing so will help prevent you from penetrating underwater caverns or caves far enough to get into trouble.