Sipadan, claimed by many as one of the best wall diving out there, is a true marine paradise with rich underwater biodiversity and intact reefs. The area that composes of 15 individual reefs, 11 Islands and over 200 recorded dive sites gives divers almost unlimited opportunities. The dive spots and marine life vary from island to island but near the top of the list is Malaysia's Sipadan Island; the underwater topography of this tiny 40-acre island in the Celebes Sea just off of Borneo is tremendous. Boasting over a hundred dive sites, with many internationally famous ones including the renowned Barracuda Point, this is definitely one of the places to dive before you die.
19. 11. 2015 Comments: 0

Formed by ancient volcanic activity, Sipadan is actually a coral that has grown on the cone of an extinct volcano. When polyps of corals started to settle on the extinct volcano that was once rising steeply over 600 meters (2,000 feet) out of the sea bed, nobody would have thought that a great variety of flora and fauna species developed here, creating Sipadan Island, home to more than 3000 species of marine life and hundreds of species of coral. 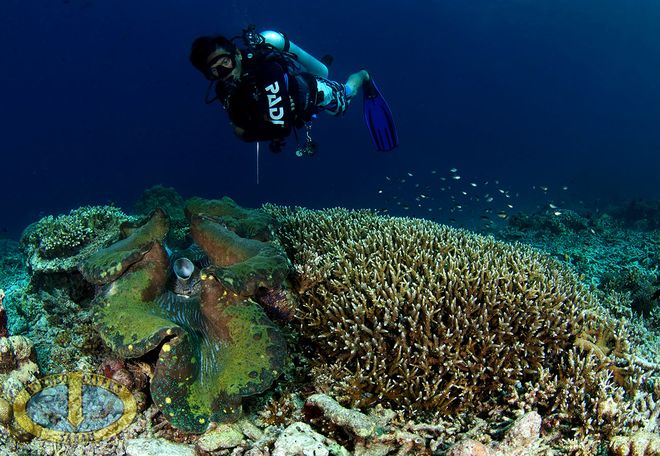 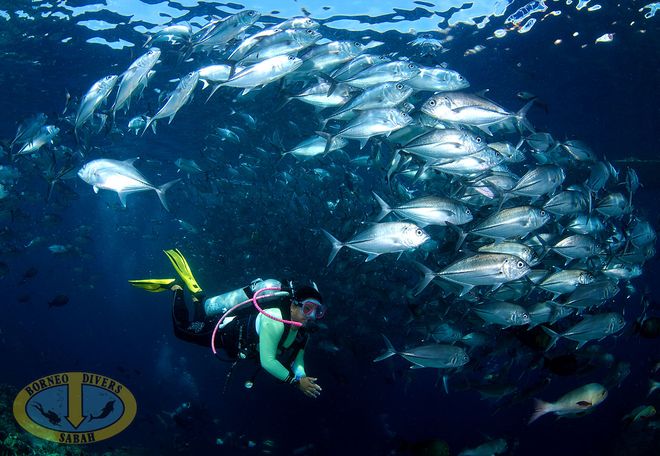 Most interestingly, this unique creation of such world class ecosystem developing over thousands of years was mainly due to the weight of the coral that brought the volcano underwater. It's almost the same as if you'd sunk a botanic garden, there are steep coral encrusted walls teaming with life everywhere. One of the greatest things about the area the sudden drop offs into the deep blue; just 20 feet from the shore, the wall plunges a staggering 2,000 feet (600 meters) down.  And while you are slowly descending into the blue an incredible diversity of marine life begins to show. 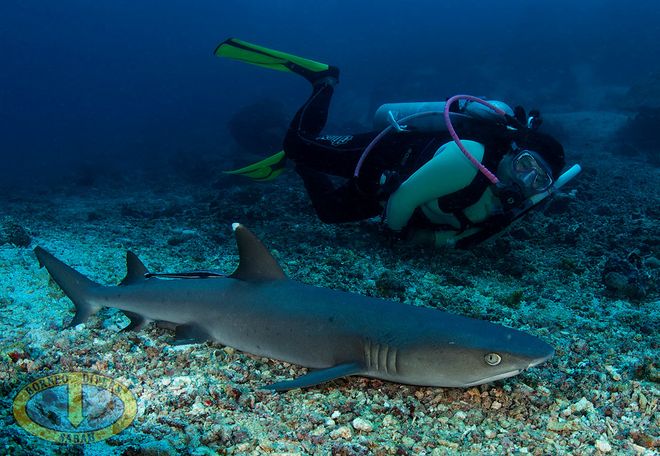 Laying off the east coast of Malaysian Borneo in Sabah, Sipadan Island is the big draw for experienced divers. A lot of diving here consists of current or drift diving, with the currents around Barracuda Point being the strongest. Divemasters will usually keep you around 20-25m for the wall dives, although deeper dives are also worth considering for technical divers. Because Sipadan Island is a protective area, diving here requires a permit issued by Sabah Parks. To minimize the stress on the reefs and marine life around Sipadan, each day, only 120 divers are allowed to plunge into the pristine waters surrounding the island. This is all good but unfortunately, this also means that not everyone will get to visit Sipadan Island every day. That's when a local dive center might come in handy.

The diving scene in Borneo had exploded after Jacques Cousteau's movie “Borneo: Ghost of the Sea Turtle”, documenting Sipadan’s beauty and lush marine life, bringing the island international fame. As a result, Clement Lee and his dive buddies, Randy Davis, Ron Holland and Samson Shak to incorporate Borneo Divers, the first recreational diving operations in Sabah. Today, 23 years on, Borneo Divers still lead professional dive operation in Sabah, with operations on both the East and West Coasts. So to dive on Sipadan you have to stay somewhere nearby, such as on Mabul, Kapalai or in Semporna, and take a boat onto the island. And it's the small fishing village island Mabul that Borneo Divers' full service dive centre with accommodation on-site is located. Situated off the South Eastern coast of Sabah, this place is just a stone throw away (15km) from the world famous dive sites. 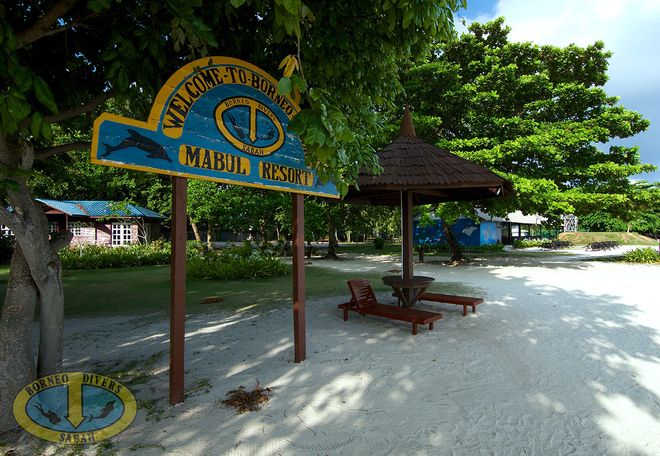 There are few places on Earth where a diver can see schools of whirling barracuda but none like Sipadan's Barracuda Point; this outstanding dive site has a great barracuda shoal often seen in a tornado-like formation, an endemic phenomenon. Apart from thousands of Chevron Barracudas, you might also spot dozens of turtles, schools of Jacks, Batfish, Bumphead Parrotfish and Whitetip Sharks. Occasionally you might spot an unusual looking predator; the island is one of the last strongholds of the scalloped hammerhead shark. Apart from these species, this drift dive furthermore boasts dense coral formations, gorgonians and boulder corals. Dive depth ranges between 15-20 meters and some noticeable yet mild currents that could occasionally be strong must be taken into an account when diving here. 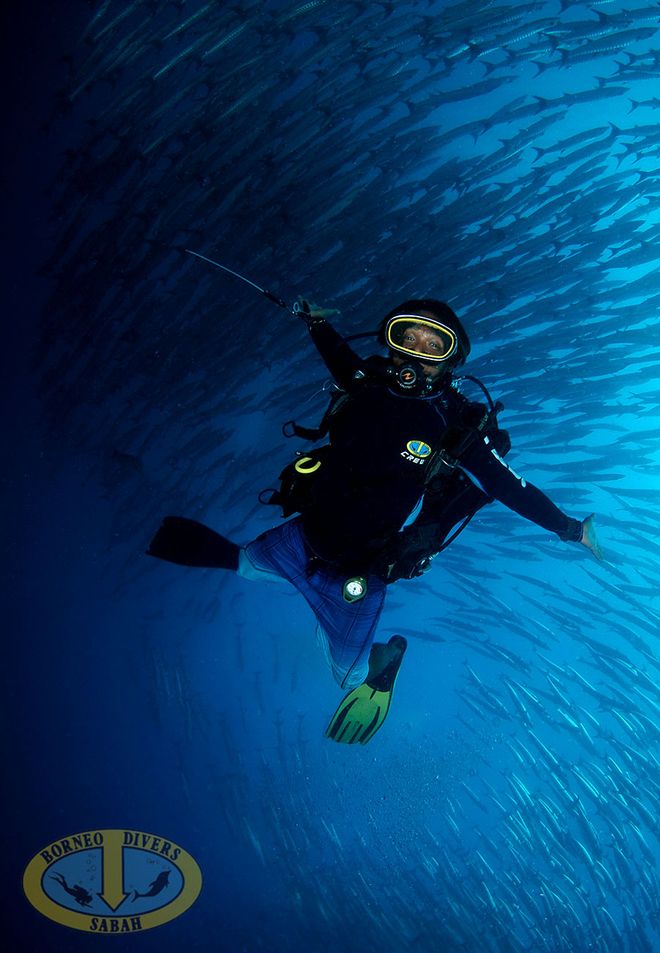 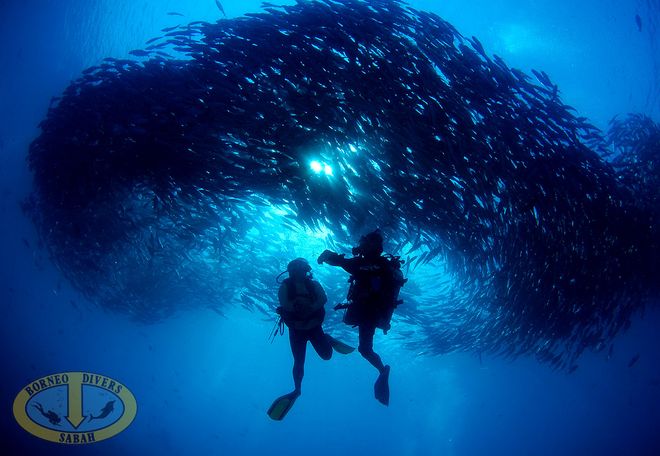 All in all, Sipadan Island’s unique geography makes for an unforgettable experience. Warm water, visibility reaching up to 50 meters during the dry season together with ubiquitous lush forests and white sand beaches, there is no reason why this place shouldn't be on any diver's bucket list.