Wreck divers are constantly after destinations where to unleash their passion. The Mediterranean and particularly the Ligurian Sea, are one of the best places thanks to the many ships that sunk there throughout history and above all during the Second World War. Santa Margherita Ligure, a lovely village in the Italian Riviera, it is the touchstone for all divers who wish to commit to this activity, for it offers  either simple and practical tourist services and it is located in a very strategic position with regard to the spectacular shipwrecks and the Portofino Marine Reserve famous for its particular sea flora and fauna. If on top of this one adds the professionalism and comfort of a dive center fully equipped for technical diving and ready to satisfy all requests even of the most demanding diver, the result will be an extremely rewarding experience.
13. 2. 2016 Comments: 0

This is a trip summary of one week of technical diving (normoxic trimix / tech1 level) which I attended last May in Portofino, Italy.

First of al, it's a beautiful place. Portofino itself is a postcard. See for yourself !

Santa Margherita Ligure isn't bad either, featuring a modern marina. The dive boat is moored right in front of the pier, walking distance from the dive centre.

The dive center is a GUE facility renowned for its infrastructure and staff, and for the many shipwrecks scattered outside the harbour, lying at depths anywhere from 40m-80m. We'll be diving many of them during the week !

Inside the dive center, as soon as one enters the main doors, there are lots of double 12s and S80s for deco awaiting. The kit looks barely used, or new. Standard labeling everywhere. Clean, logical layout for cylinders. The very high standard set with gear appearance immediately gives the sensation of safety. This feeling will be there during the entire diving operation.

No need to haul the gear to the boat: a motorized transport (locals call it Ape) drives it to the pier, just 100m from the dive center.

The first dive is on Monday morning. It's the shallower dive of the week (40m) to get back into it and get to know the rest of the group. It's a good thing: some of us haven't been in the water for a few months, it's always beneficial to recollect the details of the GUE EDGE briefing and Tech1 deco. Later during the week, there won't be room for error or lack of precision. We dive directly on trimix 21/35 with EAN50 for deco. Runtime is roughly 60mins featuring 30' bottom time (BT) and 25' deco.

In our group this week, four Norwegians and two Belgo-French. Three out of the four Norwegians are dressed in red DUIs, so I'm feeling immediately included. The rest dive in SANTIs, not bad either. But still, traitors. ;-)

Annika is a GUE Fundamentals instructor, and a Tech2/Cave2 diver, in addition to being a very talented photographer. In fact, a lot of the photos hereby are courtesy of her.

I am not diving today because of my late arrival. Enrico will get me at the airport in Genova (45' drive) that evening.

We dive on the Bolzaneto, an Italian cargo torpedoed in 1948. The wreck is 58m deep. We are targeting a 48m average depth for 20' of bottom time, on 18/45 + EAN50. From now on, this is the only gas we'll dive on. At GUE we don't skimp on the gas mix; with 45% helium, our END is excellent ! During pre-dive checks, everyone has the Donald Duck voice from the high helium content. 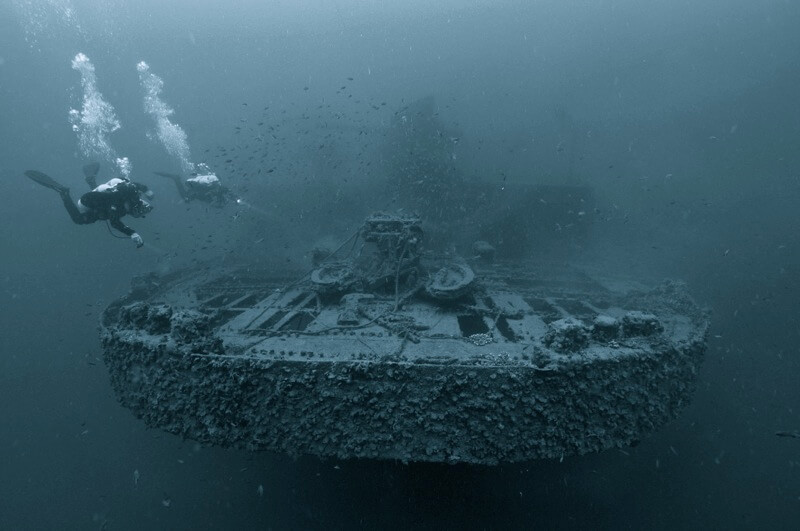 During dive planning, we compute extra time and/or depth compared to the nominal plan. Computer use and verification is required, either using DecoPlanner or any software capable of similar performance (I use MultiDeco). This is the baseline. Doing the maths on the fly is still possible of course, at Tech1 levels the results are a very close approximation to software-computed deco.

For our 18/45 mixture, we need to add 5' of deco time to the baseline, because of the extra inert on-gassing compared to 21/35. What we gain in safety we lose in range, and that's totally fine to us.

I use this dive to polish my buoyancy. With 30' of obligatory deco time, an error would be fatal. Enrico does deco Führer (Mario coined the expression, haha ;) so it's me who launches the SMB at the 21m stop. Our 3rd companion, Robert, helps the group stay level at 21m during the various stages of the stop and gas switches.

Getting back to the dive base we sprint to eat a pizza on the beautiful harbor, and then some of us go for a siesta. I know many of you will relate.

We dive the UJ-2216, a luxury french yacht transformed submarines chaser during WW2, tsunk in 1944 by american torpedo boats. Ammunition in its holds exploded during the attack, and sent her down to 60m to rest. 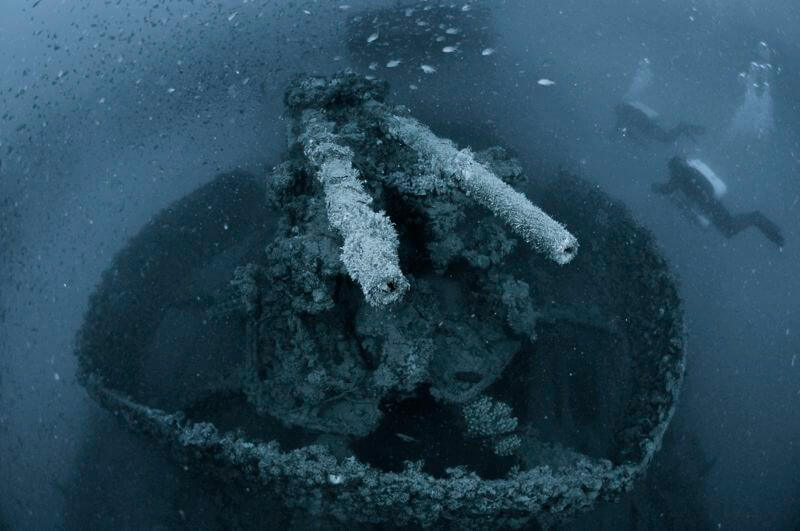 The D12s are filled to 240b, we set the turn pressure to 150b so as to get back to the shot line. We descend on the shot line and we'll get back to it at the end of the dive. I do deco führer this time. I have trouble putting my wetnotes back in my drysuit pocket after using them; Robert helps me clean-up.

Very good visibility on that wreck, with a small amount of current, not unpleasant if you ask me. Everyone comes back to surface smiling and would probably do it again. Max depth 55,6m, runtime 68'.

D-day for some of us because we'll dive on the Haven. It's a mythical wreck in the area due to its sheer size and wide range of depths. This supertanker sank in 1991 due to a fire. The wreck is in 2 pieces. We dive on the rear bit because the front is much further away and deeper. 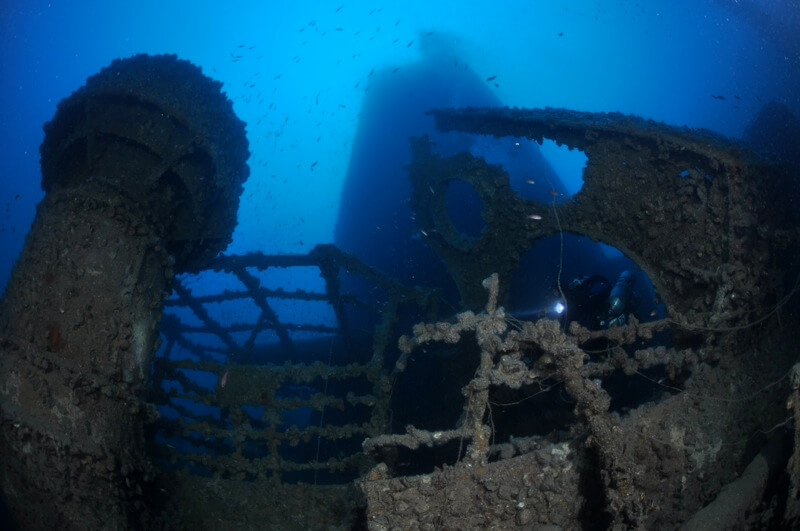 We plan to touch 57m which is the MOD of our 18/45, and then go back up on the castle. Between the numerous staircases and open rooms, we can indeed dive with a fairly shallow 45m average depth. We shoot for 30' at 45m for 35' deco.

Obligatory visit of the bridge, which is one of the shallowest rooms. A statue of the Madonna has been installed there for the occasional guests to see.

The rest of the deco is performed on the shot line, among colorful schools of fishes. We should have brought a poet. Ultimately we did 57,2m max depth and 71' runtime. Everyone's thankful for their p-valves, almost obligatory on such a long dive.

Day 5, morning. The UJ-2210 is another German u-boat chaser, member of the Uj22 fleet, which was torpedoed in 1943. She rests by 64m depth, but because of the strange position of the wreck, the shallower part, the bow, is at 44 meters. As this one is on the fringe of our capabilities as Tech1 divers, we plan for a shorter bottom time today. 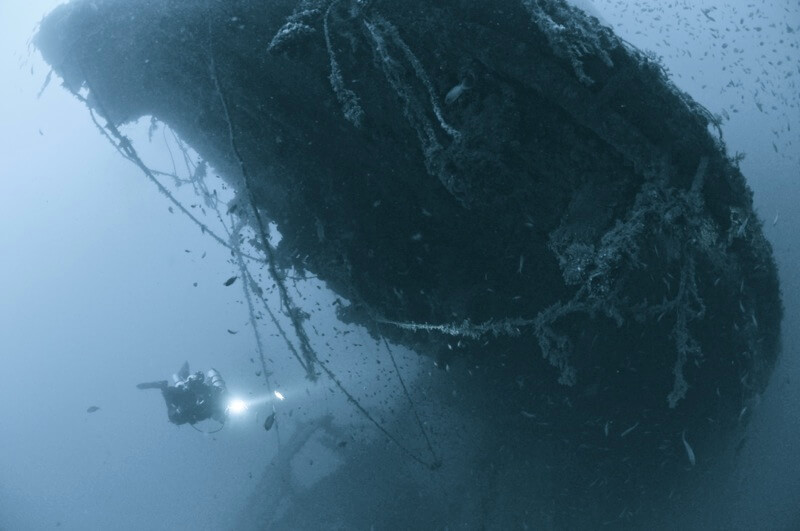 The wreck is in up right position, the bow is pointing the surface, amazing ! We couldn't find the cannons or the depth charges because it is a bit disorienting for us. With a BT of 29' and a 51m average, we do 35' of deco.

Someone brought their dive computer on the dive, to check if our GUE-computed deco was a match for what a standard RGBM or VPM-B would produce. Incidentally, both our plan and the dive computer agreed within 2 minutes of each other, giving us (GUE-deco) the 2' extra safety--the computer had finished with deco before we did. Yay for safety. Max depth 63m, runtime 69'.

Day 5, afternoon. Bruno is leading us to the Portofino marine reserve, featuring beautiful corals at depth 40m and deeper. We switch back to 21/35 main gas so as not to aggravate our deco time on this shallower dive.

Bruno dives with his scooter and goes from one pair of divers to the next one filming. Upon going back to surface, there's a school of barracudas hunting right next to us--pure magic.

We dive on the GENOVA, literally just outside of the harbour ! She was an Italian cargo ship, torpedoed in 1917. It's the oldest shipwreck that we got to dive during the week. Bruno finds her easily with the Raymarine sonar lying by 60m depth. 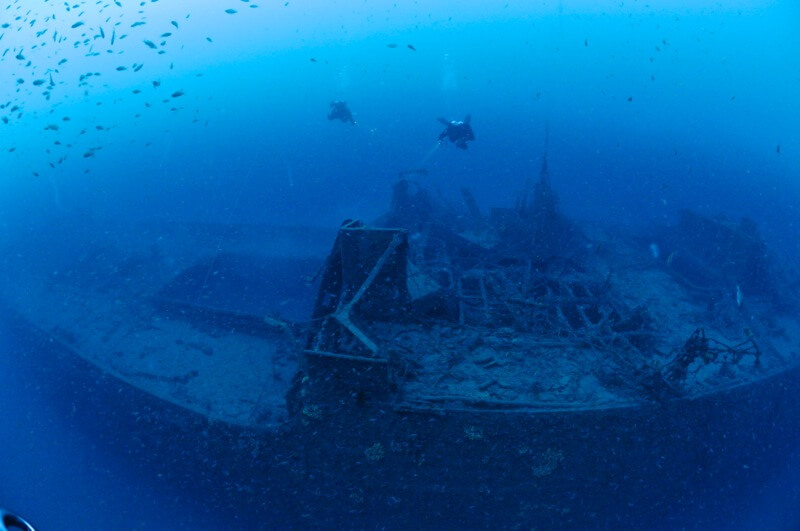 Last time diving from the boat..

The wreck is silty, but visibility is good once you take a little distance from it.

We are all frustrated to have to go back up. 10' extra or even 20' would be greatly appreciated at that point ! Now we are feeling the limitations to Tech1 diving. Divers certified at Tech2 bring an extra back-gas cylinder and 2 deco gases for extended depth and range. This makes us wanting more... Maybe some day !