Massive early season surf around the world sets high expectations for an epic winter. Big wave surfers from across the globe have been regularly challenging spectacular swells in recent months - producing record entries in the WSL Big Wave Awards - and continue to ready themselves for an unprecedented level of intensity during what is widely anticipated to be among the greatest winters for high surf in history. While the past years produced many swells that were also "too big to surf" the evolution of modern big wave riding techniques and equipment has totally changed the game. And for that, we cannot wait when the ocean breaks loose.
20. 11. 2015 Comments: 0

Famously termed "too big to fail" by NASA climatologist Bill Patzert, the current El Niño weather phenomenon is among the most powerful ever recorded and is expected to wreak additional havoc around the world with exceptionally violent storms, especially over the coming winter months. In a graphic provided by Surfline.com, the impacts of the 1982/83 El Niño are indicated by he purpse and red areas which consistently experienced much larger than normal significant wave heights.  Swells from these storm areas traveled onward to Hawaii and the West Coast, setting many buoy height records over the course of the winter. Image courtesy of Surfline.com.

For the surf community this superheating of the North Pacific Ocean is a source of great excitement, concern and preparation.  Throughout the Hawaiian Islands and along the West Coast of North America, similar previous El Niños in 1969/70, 1982/83 and 1997/98 produced the biggest waves scientifically recorded since the sport was introduced to the world. 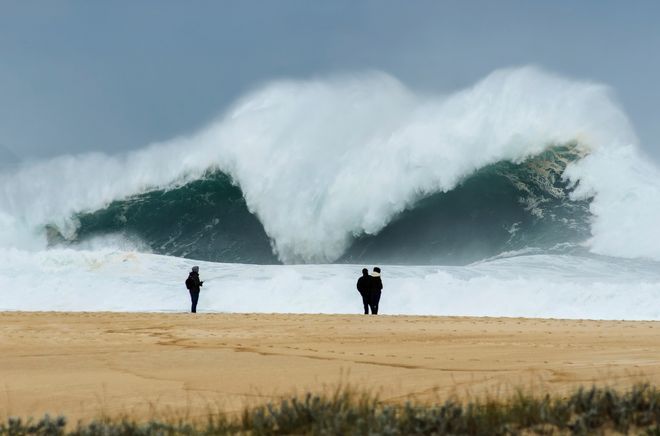 A massive wave breaks in front of beachgoers at Praia do Norte, Nazare, Portugal on November 1, 2015. Exceptionally large waves have been hitting coastlines around the world and are expected to increase in intensity as the El Nino weather condition takes hold during the winter. Photo: © WSL / Helio Antonio 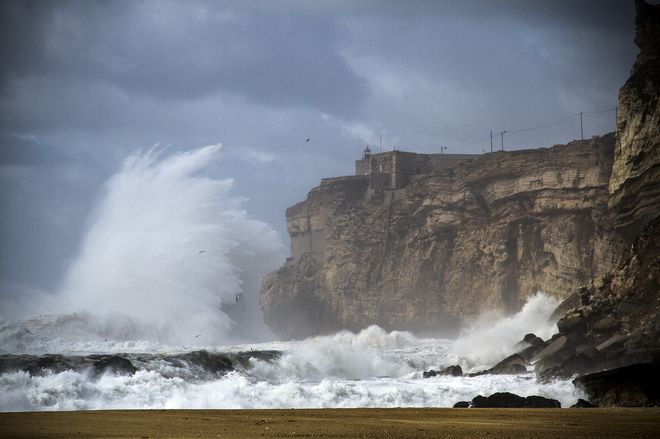 Whitewater from a breaking wave matches the height of the lighthouse at Nazare, Portugal, over 50 meters above sea level. Exceptional storms are expected to drive larger than usual swells through the winter, providing added intensity for the 2016 WSL Big Wave Awards. Photo: © Vitor Estrelinha

"Any veteran surfer will tell you that the three previous major El Niño seasons in modern history produced the most extraordinary big wave seasons of all time and we've all been warned that this one is of the same caliber," said Bill Sharp, the director of the WSL Big Wave Awards.  "The difference is that today the surfing community has developed the capability to potentially ride any wave the ocean can produce and has been actively training to be ready for whatever does come.” Pedro Calado (Rio de Janeiro, Brazil) takes off on a huge outside peak on one of the biggest beach break days ever surfed at Puerto Escondido, Mexico on May 3, 2015. The image has been entered in the 2016 WSL Big Wave Awards.  Much bigger that average waves are expected to continue through the winter months as an El Nino weather condition gains strength. Photo: © WSL / Daniel Nava

"The waves of January and February 1998 were the biggest we've ever seen," recalls Sharp, "but the idea of using watercraft to access big waves was only in its infancy and since then paddle surfing has reached another level as well. Where we were 18 years ago was Wright Brothers stuff versus today's Space Age capabilities in surf of that size.  I don't think you'll find a single big wave surfer who doesn't have the sense that everything we know about the limits of both paddle and tow surfing will be heavily tested — and perhaps totally rewritten — over the next four months." 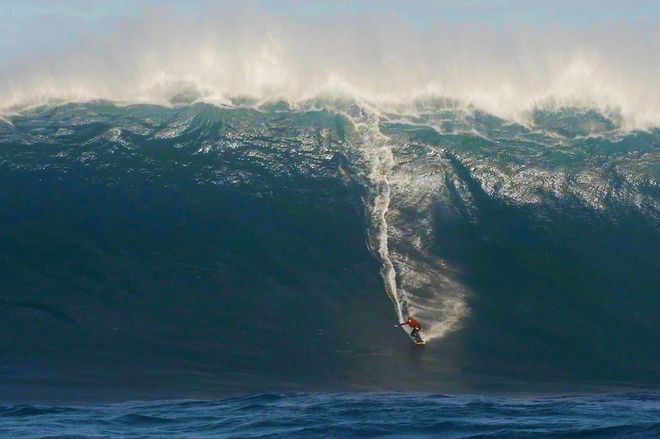 Justin Holland (Coolangatta, Queensland, Australia) drops to the bottom of what is likely the largest wave ever attempted in Australia. Holland challenged the wave at Cow Bombie, an offshore surf spot in Western Australa on June 27, 2015. A run of exceptionally large surf worldwide is expected to culminate with El Nino-fueled swells in the North Pacific this winter. Photo: © WSL / Nimai Strickland

The biggest surf recorded on any populated coastline of the world in modern times occurred on January 28, 1998 on the North Shore of Oahu, Hawaii.  Shore-breaking waves of 40 to 50 feet forced Oahu Civil Defense to issue an unprecedented "Condition Black" alert that closed all access to Waimea Bay and all other beach areas and caused millions of dollars in damage to coastal properties. In a pioneering moment in the emergence of the tow-surfing era, few surfers on jet skis were able to reach outer reefs and experienced waves well in excess of 70 feet on the face. 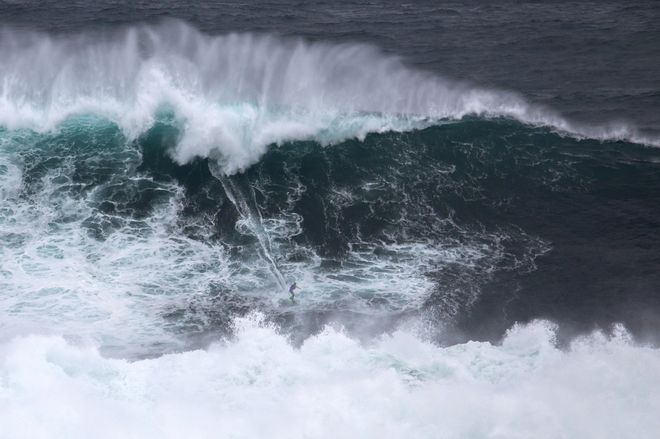 Pedro "Scooby" Viana (Rio de Janeiro, Brazil) is towed into a huge, stormy wave off Nazare, Portugal on October 27, 2015. One of the biggest waves successfully ridden so far this year, the ride has been entered into the TAG Heuer XXL Biggest Wave category of the 2016 WSL Big Wave Awards which will take place next April.  High surf episodes are expected to increase in severity this winter due to a an exceptionally strong El Nino weather condition. Photo: © WSL / Vitor Estrelinha

Kevin Wallis, lead forecaster at Surfline.com, has analyzed the data of these past weather events and emphasizes that while the big wave surfing community can expect a continuation of action in the coming weeks, the full brunt of the mega-El Niño will likely occur after the holidays. 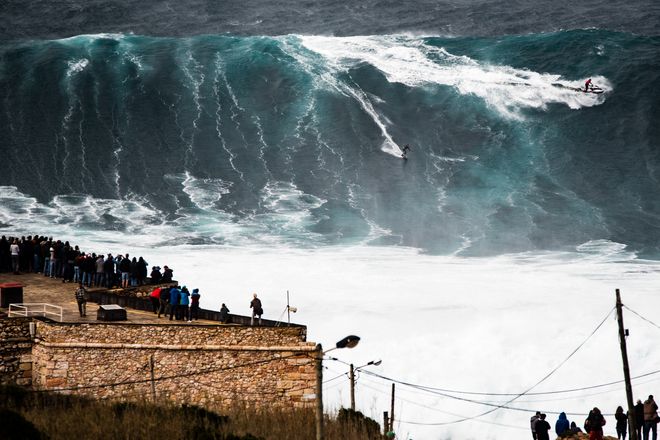 "In past strong or very strong El Niño years we've seen a number of incredible storms, often back-to-back, very close to Hawaii and very close to the West Coast. Within these stronger systems we may see seas up to fifty to sixty feet — maybe even bigger than that — and we could experience some of the strongest storms we've seen in the last ten years, if not the last 30 years," said Wallis. "These storms have been known to produce incredible numbers, with hurricane force winds blowing over vast areas of the ocean. 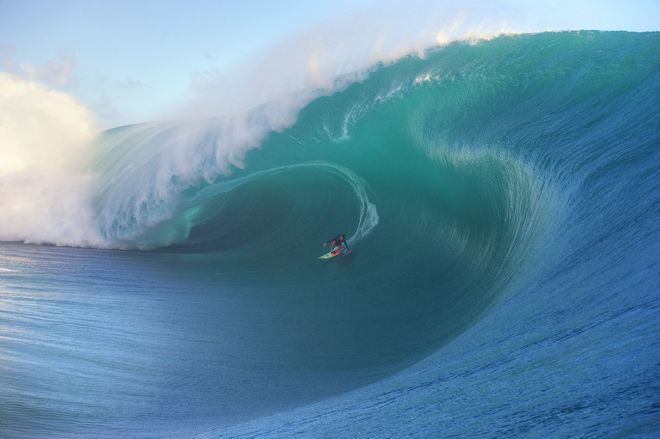 Keala Kennelly (Haleiwa, Hawaii, USA) rides the biggest tube ever challenged by a woman surfer at Teahupoo, Tahiti on July 22, 2015. The image is an entry in the 2016 WSL Big Wave Awards.  Exceptionally large surf has been experienced worldwide in 2015. Photo: © WSL / Tim McKenna

"Typically, we would look for the peak of the swell producing activity to come in the heart of the winter, in January and February," added Wallis. "Even for surfers who don't want to ride a 70 foot wave, this El Niño is a unique opportunity as it can mean some of the protected breaks that need a huge swell to filter in will provide smaller but great waves." Stay tuned, this is going to be an epic ride!