Australian surfer Sally Fitzgibbons wins the fifth stop on the 2015 Samsung Galaxy WSL Championship Tour, the Fiji Women’s Pro, in challenging and sizable surf. The sweet victory was Fitzgibbons’ first of the year and the ninth elite CT win of her career. But this one was even more satisfing as she's been nursing a painful perforated ear drum through a dominant final where she defeated Bianca Buitendag. With only one good ear, she looked determined and fearless all the way through, powering through heavy conditions on her way to the victory.
8. 6. 2015 Comments: 0

The result sees the Australian move up three places to third on the leaderboard, putting her firmly back in the world title race. The 2014 event winner was able to defend her title, claiming back-to-back wins in Fiji with an excellent 9.33 score despite suffering a perforated eardrum in Round 2.

“I’m so exhausted the tears came out,” said Fitzgibbons. “It’s been such a big couple of days and quite a bit of pain. I just thought whatever the ocean is going to deal up to me I’ll be happy with it. At this stage to have a win is so amazing and I’m just so happy. Credit to the medical staff for taping me up and to everyone supporting me back home - I love you guys, we did it. In the face of adversity this is definitely one of the most special wins I’ve ever had.” 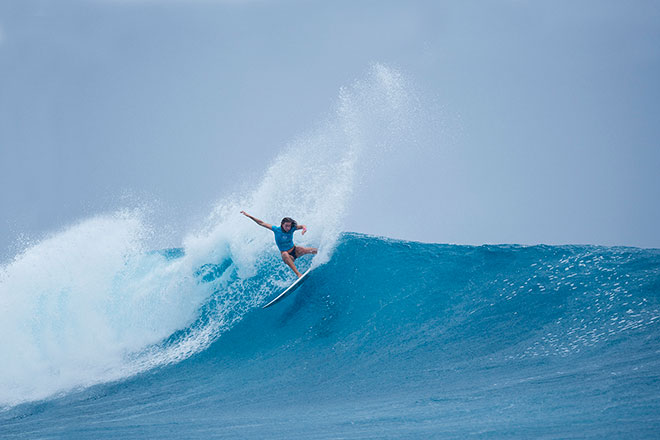 “All those years of training and that mental strength really helped today, you just know that you’ve got it in you,” Fitzgibbons continued. “I really like connecting with the ocean out here in Fiji. It’s go so much power and it’s the biggest challenge. It threw me around a couple of times today but I just told myself to relax, you only near one ear so it’s okay!”