They call themselves the Global Stars. Five aviators and all British champs Mark Jefferies & Tom Cassells along with Chris Burkett and Steve Carver form a team that captivates the crowd with gravity-defying feats of bravery and skill. You might know especially nine times British aerobatic champion Mark Jefferies, who has achieved great success and worldwide recognition as one of the most accomplished aviators in the UK; including 3rd in the 2011 World Aerobatic Masters, ranked 8th in the World in 2007 and 10th in the World 2009. Jefferies owns Global Stars team and he uses EA 330SC, a red colored aircraft that performs for the longest duration in the team's solo acts. Recently the team has released a stunning video capturing their 4-ship and 5-ship display routine. Check it out.
2. 7. 2015 Comments: 0

The team has recently wowed the crowds in India during Gujarat Aero Conclave air show. Especially Cassells, the team leader, who flew all the way from UK to Ahmedabad, covering over 2000km left a big impression. The reason for flying to India is the complication involved in dismantling and then assembling the tail and wings of the aircraft, as some parts are made of wood. Check this guy out, he flies CAP 232, a white-colored aircraft of French design. 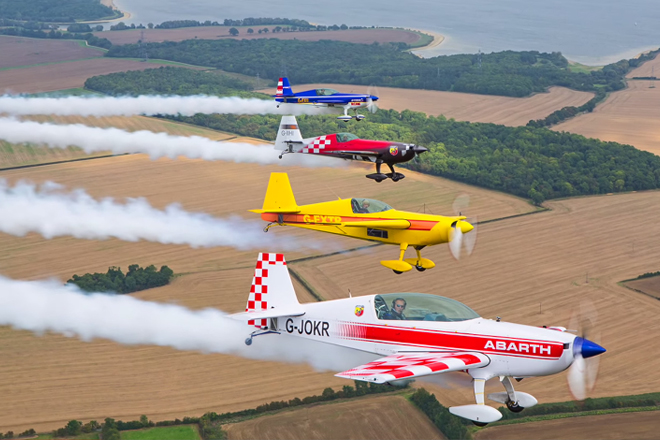