133 of adventure savvy inhabitants of the Russian city of Tver celebrated their city´s foundation anniversary by mass-jumping off a rail bridge back in 2012. Although it sounds a little crazy, the mass rope jumping in Tver has already become a tradition. The city had seen it for the sixth time last year. Moreover, the tradition has become a part of the Festival of mass jumping in Tver. There are no official statistics of these kind of jumps in the world, but it is quite likely that Tver´s mass-jump of 133 people has set a new world record.
17. 1. 2014 Comments: 0

The first Tver festival took place in 2008 with attendance of just 20 jumpers. A year later, the number doubled, and in 2010 there were 100 of enthusiasts ready to swing. See what happens during the next years´ festivals :) Adrex.com includes the city´s famous railroad bridge into the list of Bungee Jumping sites. Find the place on the map of Adrex.com Locations... 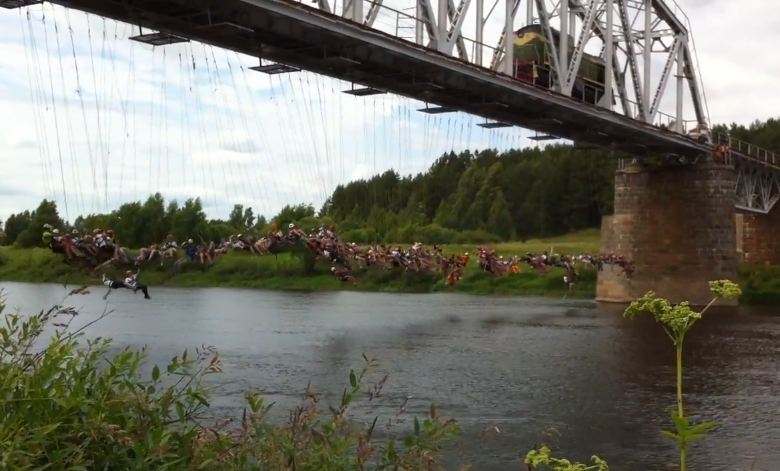 The city of Tver is located 170 km northwest of Moscow. Driving from Moscow hit M10 Highway and follow through the cities of Solnechnogorsk and Klin until Proletarskiy Rayon (turn right before crossing Volga river and continue through the city. Then follow north by the Tvertsa River for about 5 km.