If you are looking for an excellent dive while in Canada, Tobermory should not miss your attention. The town, dubbed the Scuba Diving Capital of Canada, has gained its reputation due to its rich and cultural legacy that includes 22 shipwrecks and several historic lighthouses. Nothing spectacular some might say, shipwrecks are found all around the World, even in larger numbers, but what makes this place to stand out from others is the crystal-clear waters that surround the numerous ships that lost their battles to Lake Huron. And that means the only thing; a perfect visibility. That and the relative lack of zebra mussel development on most of the ships make for a must dive for any serious diver.
29. 2. 2016 Comments: 0

Tobermory is a picturesque town located at the northern tip of the Bruce Peninsula, a place of global ecological significance. The deep waters at the mouth of Georgian Bay are home to Fathom Five, Canada's first National Marine Conservation Area. You might wonder where did the pristine water came from but to understand the whole process, you'd have to go back in time when some of the hardest sedimentary rocks, called dolomite, formed in the Great Lakes Basin. And it is this ancient rock formation, billion years old, that rises through the sparkling waters of Lake Huron to form Fathom Five National Marine Park. This is a freshwater ecosystem at its best. 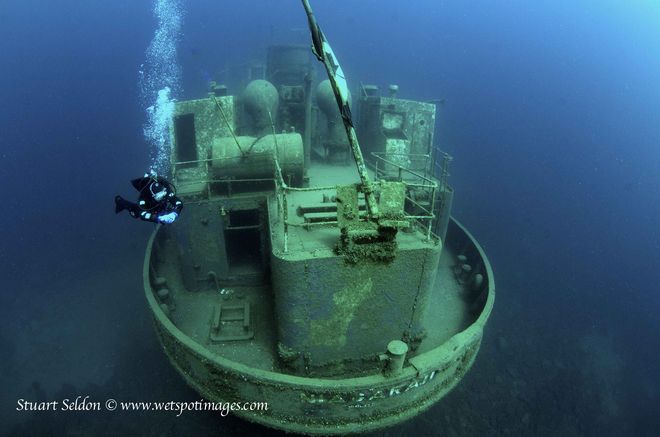 The whole park boasts a huge array of habitats, from old cedar trees to dense forests and of course, clean lakes. Apart from the clear water, the park is also made of an archipelago of 19 islands featuring a unique combination of plants and animals, including deer, bears and rattlesnakes. That's all great but what about diving? 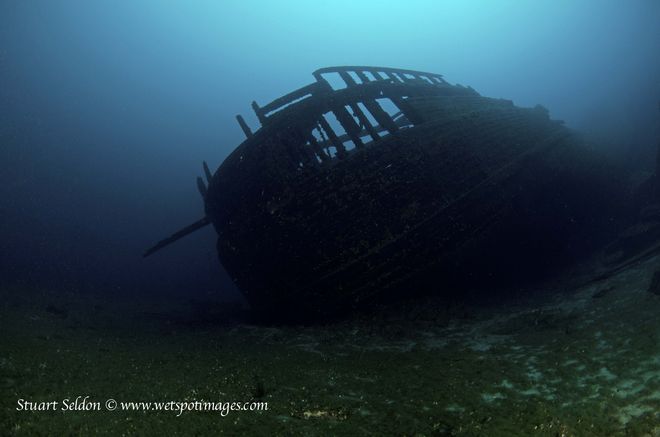 Diving is just as spectacular as the Fathom Five's ecosystem itself. Dramatic cliffs rising from the turquoise waters of Georgian Bay, limestone overhangs and large caves can be found both on the islands and submerged beneath the water. So to see all of its beauty, you have to dive in. Well, you don't have to since some of the shipwrecks are visible even from a boat but that's not what a diver comes to the town of Tobermory for. The Great Lakes' notorious storms  and primitive navigation of the past made Lake Huron the last trip to numerous ships sailing to Tobermory. The depths range from 10ft– 150ft + and some notable highlights include: Arabia, Forest City and Niagara II.  Let's have a closer look.

The 130’ long schooner, Arabia, took on water in 1984 setting out for her last trip before she sank in heavy seas. Its 115’ depth along with cold temperature, current and haunting beauty makes this a dive for only very experienced divers. Although she's not entirely intact, some refer to her as the best wreck in Ontario. The reason is simple, she's the most photogenic and unlike Lake Ontario's Kathy Eccles and Marsh she does not have as much zebra mussels. In fact, this is another reason why divers like to flock to  Fathom Five, there is something special about being able to see the bare wood on the 100 year-old wrecks. 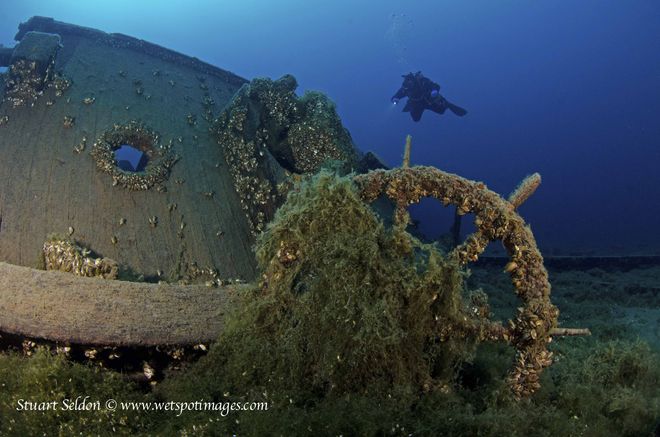 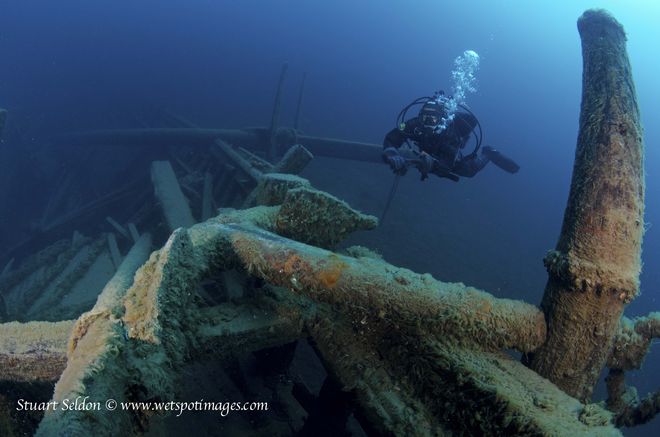 The Forest City struck the island going full steam while in dense fog 1904. As in case of Arabia, the wreck should only be attempted by very experienced divers as its stern lies in deeper waters down at 150 feet. This propeller steamer is one of the largest (216 feet long) and most intact of the group. The dive starts at 60 feet, but the most interesting part of the wreck lies between 100' and 150' with some the most notable highlight; the smoke funnel and boilers. 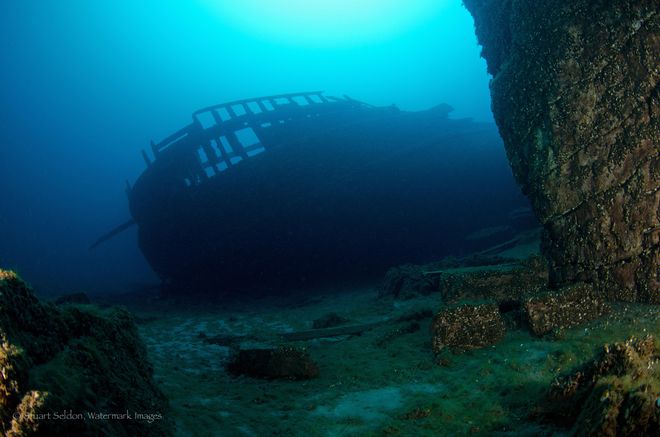 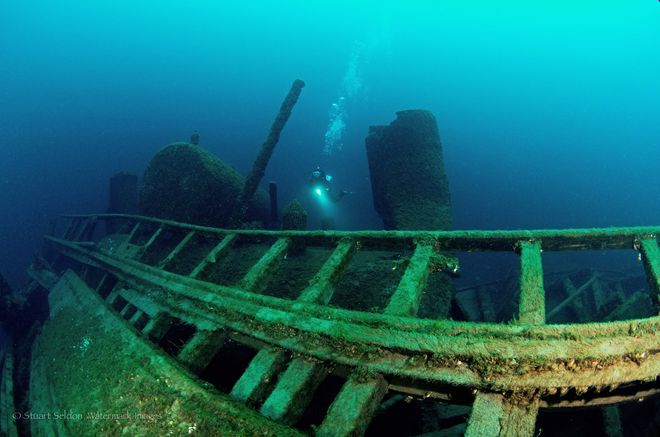 Niagara II: A Perfect Playground for All Levels

Unlike the two previous wrecks, Niagara II was sunk intentionally, to enhance the diving opportunities in the area. She was sunk in 1999 by the Tobermory Maritime Association for Open Water to Advanced divers. This beautiful steel sand sucker lies in about 100ft of water, just outside of the town's harbor. The dive starts at 45ft and most of the wreck can be dove in the 70-80 ft range. Being made of steel left her pretty much in an intact condition. Also notable are the W.L. Wetmore and The Sweepstakes which are significantly shallower but excellent wrecks. If you ever are in the area for diving, we recommend to get in touch with Divers Den, a complete scuba diving shop serving divers since 1967. The business changed hands in 2014 and is now run by Kelly and Michael Marcotte (Michael has been the instructor at Divers Den for 15 years; editor's note). Together with qualified staff they operate a full service dive shop that offers instruction as well as operates 5 Transport Canada Certified Vessels for diving and snorkeling charters as well as sightseeing.

Tobermory is typically a few degrees colder than Toronto so their dive season runs only from May thru October but shore diving is accessible year round as long as the ice hasn’t taken over. Still,  ice divers frequent up there when it has! If you don't mind "the extra" cold, and are in for some spectacular diving, Tobermory will not disappoint, I promise.