The interplay of coincidences, in which a restless filmmaker, the ideological leader of a climbing film festival in Teplice nad Metují and a handyman of all kinds, Pítrs Kašpar, pulled the strings, got us into the whirl of ice climbing in Vír. Unexpectedly for all of us, it turned out that the ice wall provided surprisingly good conditions for "fooling around" and a pile of toys was waiting for us in the nearby Adrex Base Camp.
24. 2. 2021 Comments: 0 Photos: 16
Facebook Twitter LinkedIn

I felt a bit like a child, who would sit on the sand equipped with a pile of brand new molds, plastic excavators and tipper trucks to play with all kinds. The toys were ice axes of all possible manufacturers, which we had the opportunity to test on a nearby "sand" - an ice wall. 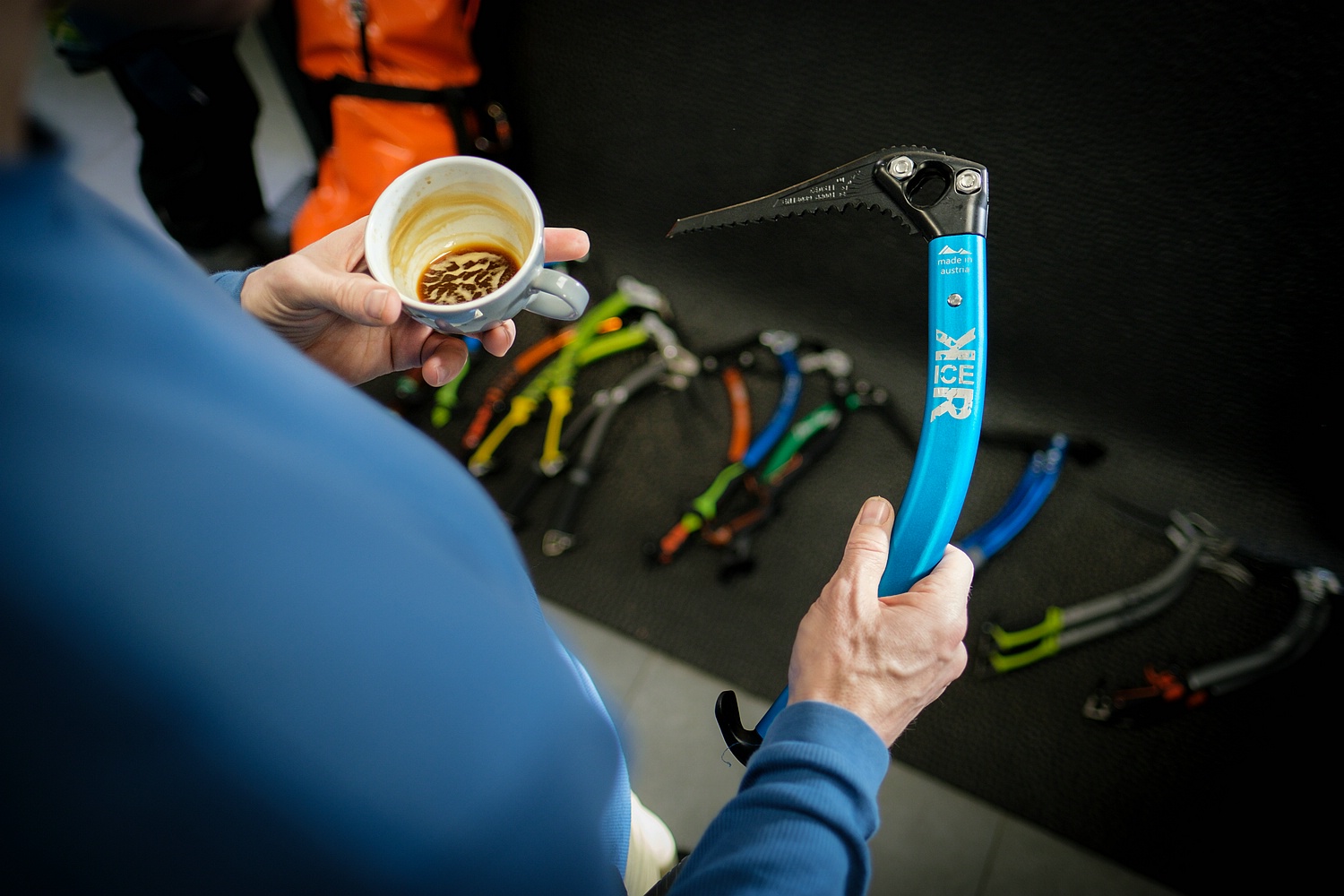 My impressions - the problem was a bit that the conditions were too ideal, the ice was amazingly plastic and therefore would be able to hold even a hammer or a hoe. With each ice axe I only climbed one, maximum of two routes.

The Ergo ice axe Nomic and the Russian carbon special cannot be compared with the others, because it is a completely different ice axe construction. The Russian ice axe is certainly lighter than the Nomic, but I wonder how it would behave in the ice. We only had drytool tips available, so we tried just few funny tricks in the suspension. 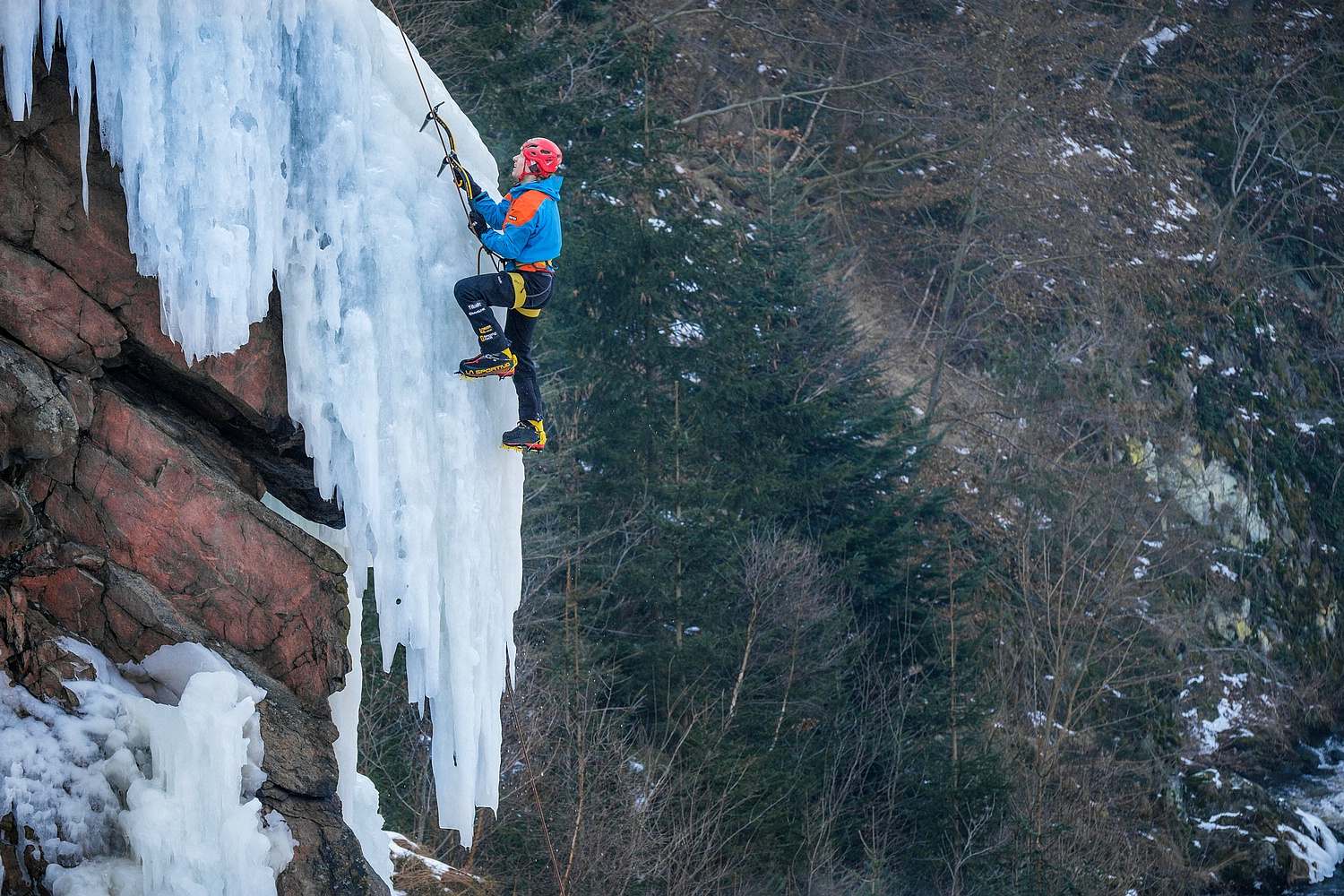 Other ice axes are comparable in geometry and purpose of use. First of all, I eliminated Simond and Edelrid. The head is too light for ice climbing, although if I had such an ice ax in the mid-90s, I would certainly be the king of the Tatras and the Alps.

I would put Petz Quark, DMM, Singing rock and Black Diamond into one category. They differ in details and what is an advantage at a certain time, at another it becomes a disadvantage (eg the strength of the head, the shape of a hammer or shovel, a hook for catching, space at the tip of the shaft for hanging behind icy "cauliflowers", etc.). DMM and Singing rock are felt similar in weight and balance. Quarks are a proven classic and probably the lightest of all, BD would be interested in behavior in mixes. To find some significant differences, it would be necessary to climb several hundred meters of diverse terrain with each ice axe. But you probably won't make a mistake with either of them. 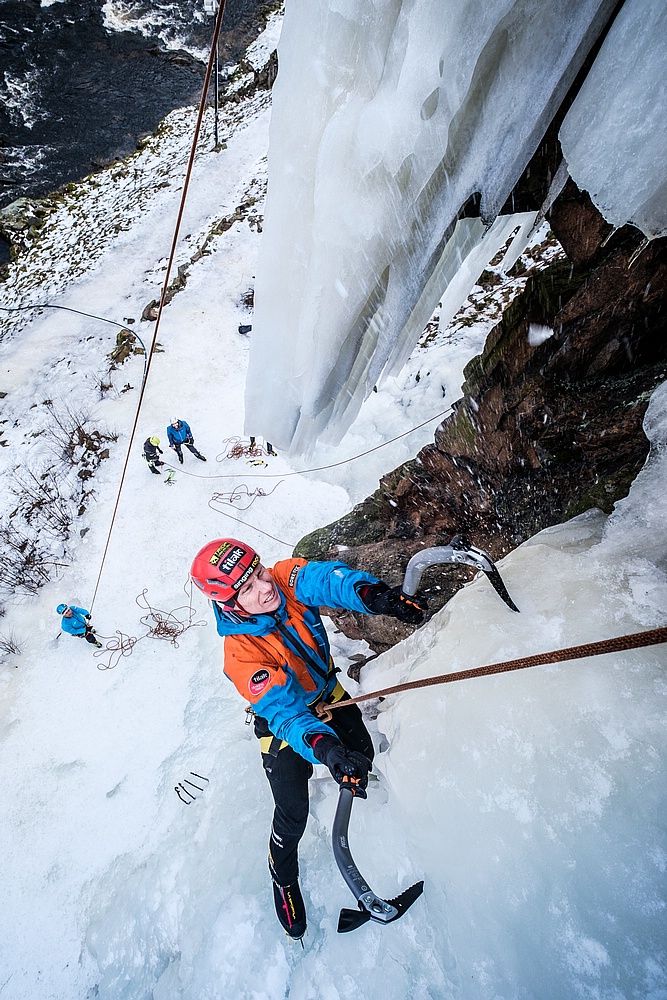 An interesting and somewhat controversial discovery for me was the carbon Grivel. It was the most accurate and lightest in the ice. More of a surgical instrument than an ice axe. Easy to operate with just the wrist of a clenched hand I was a little surprised by the small possibility of hooking by hanging behind large ice structures (small angle in the space between the tip and the shaft), which we did not have the opportunity to try. However, the biggest weakness of the ice axe is the handle. The plastic hook under the little finger is really just under it and does not cover the finger from the front. Sometimes it happens that you hit your little finger painfully, or when you get stuck in a round ice bulge, you have no choice but to bite a bullet and pinch your little finger under load. Personally, I also missed a more pronounced beak in the middle of the shaft for catching. The rubber of the handle is good and the ice axe can be grabbed without any problems anyway, but with frozen hands or bandages, I think it would be a handicap. But again the delicate job...

Not sure. If I had the opportunity to have a set of ice axes to choose from under each rope length, as a golfer has a set of golf clubs from which he chooses the best one for each stroke, I would definitely reach for Grivel if a very delicate length in ice awaited me and there was no time for pain because of fear. Otherwise, it would be one of the four mentioned tomahawks. If I had to decide now which one to go to an Alpine wall with (if the anti-covid patrols would let me in), I'd probably reach for the Singing rock Bandit as I'm used to them and pretty sure they won't disappoint. But if I could choose, I would take a different ice axe for each tour and preferably in each hand from a different brand, and when I return I will write you another report. 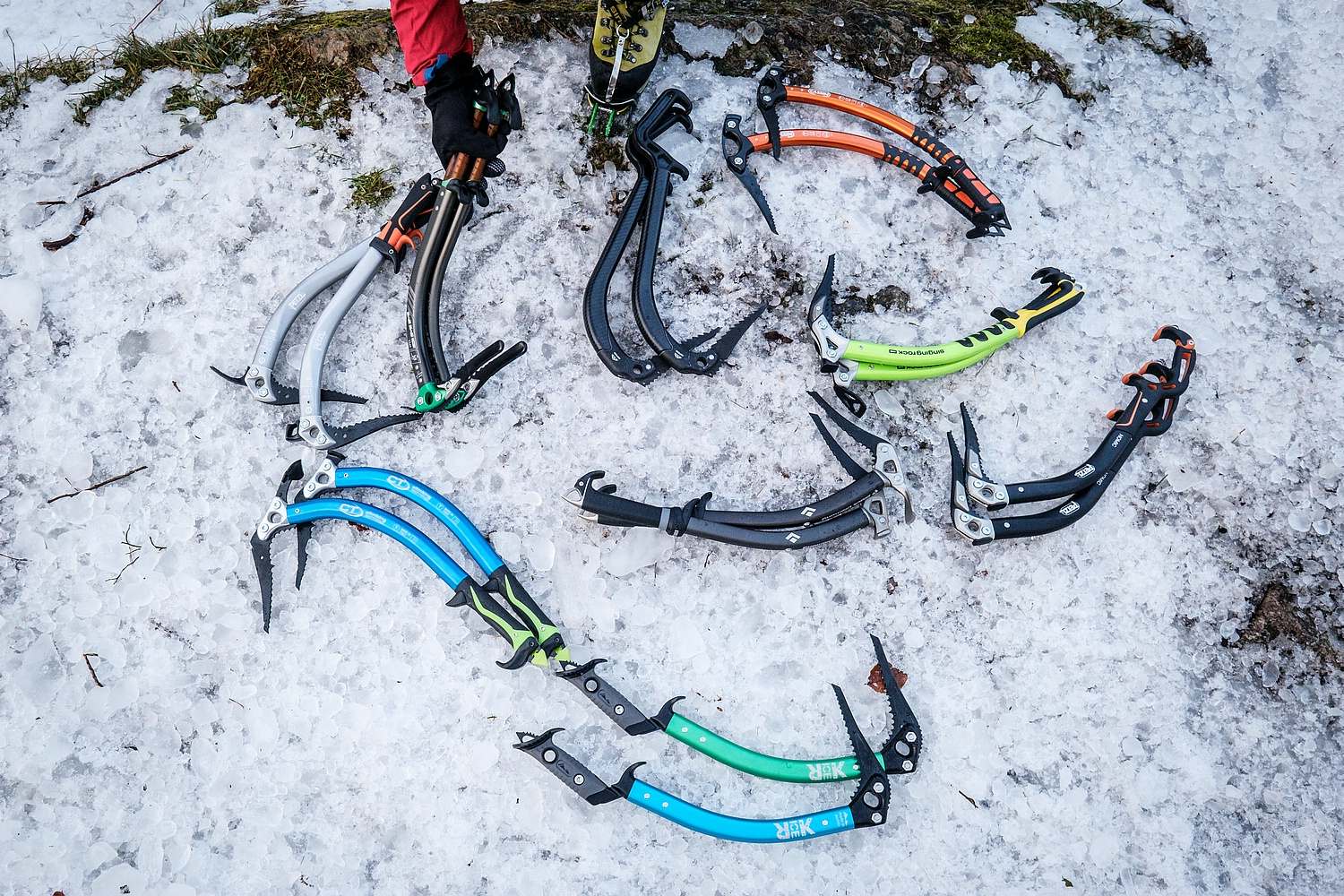 A light addition from other test figures: Honza Tráva Trávníček and Miri Jirková

Tráva: It's not easy to add something that's actually almost perfectly described. We will just try to look at the aspects of hill climbers rather than icebreakers like Stoupa, who is an excellent climber on various terrains. He is the right one who can evaluate holding, spikes, squatting and other stuff. And he really enjoys it too. If you could see the sparks in his eyes when he got on the piece of ice and he could try all those different toys. Even his tooth stopped hurting when he had the opportunity to climb…:)

It's a little different sight from an average mountaineer. We are not looking for a perfect weapons for mixes, water ice or mountain walls. Versatility is ideal and something little from each is the best. First, everyone has to say what they want from ice axes and where and how they will use them the most. Subsequently, we can talk about whether it holds well, gets stuck well, or is light or heavy.

I must state for myself that in the few years that I have only been marginally involved in this discipline, all companies have moved brilliantly in their development and I have not found any significant problems in any of our test models. Something was too light for me (I don't have any strength, so I have to beat it:), something held up better or worse, but in general all products are great. However, it can be seen that Petzl set the high bar long ago and is still holding it and will probably hold it for a while. 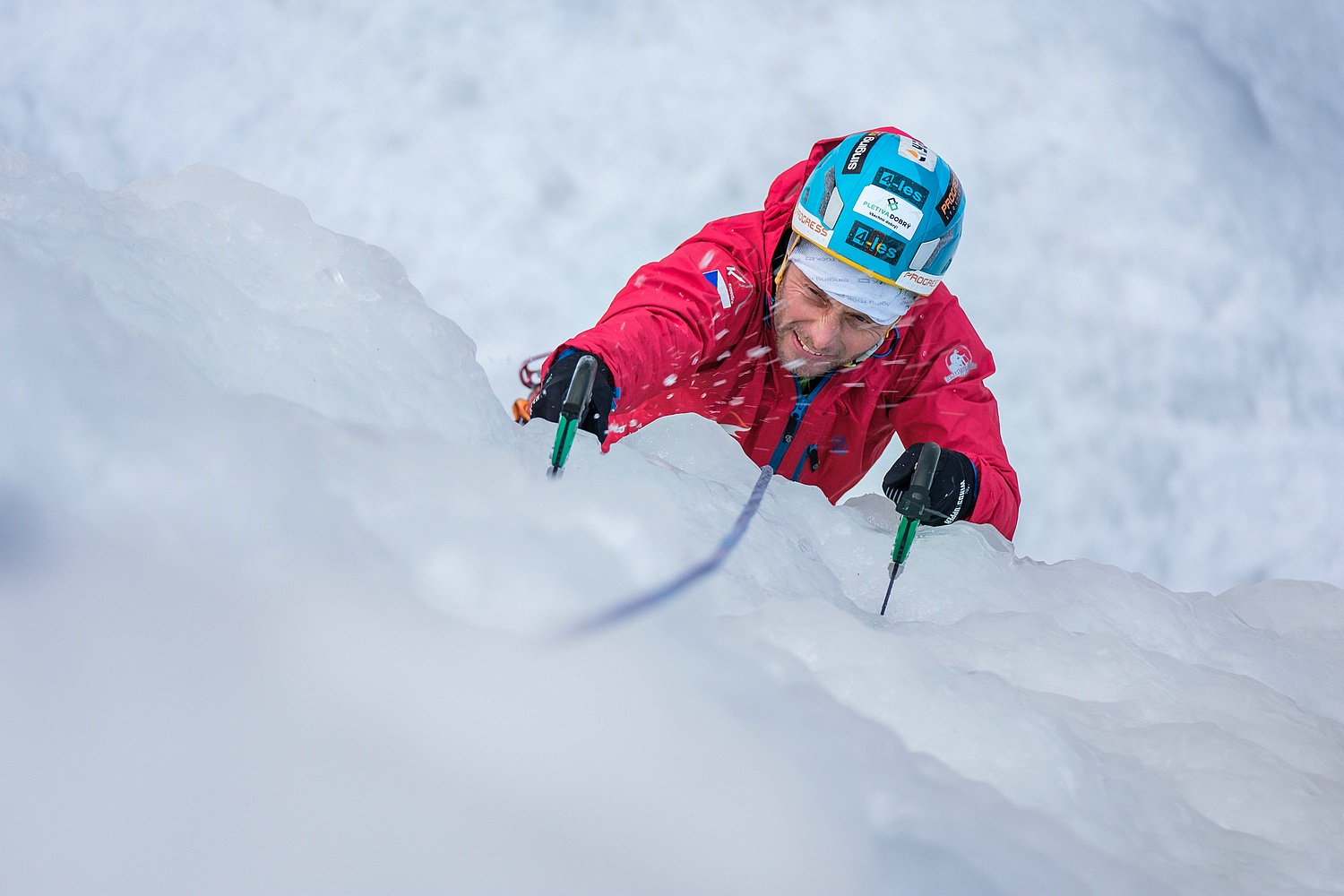 My favorite is slightly heavier, but I have tried SR Bandit many times. As a member of the SR team, I have been using it for a long time. What adds plus points to these ice axes is mainly the color. Green as "Grass" ("Tráva" in Czech:)

I still liked the blue ones, but no longer remember how was the climb with them. Well, you know, due to my long-term stays at high altitudes, my brain cells are a bit declining. But the blue color I remember well:) Miri: When the boys emptied the bag with the test stuff under the ice wall in Vír, it looked like a bunch of brightly colored, deeply frozen snakes, with their clear eyes in a poisonous toothed head begging for warmth.

Above us, in the soft light of the coming twilight, two white, sparkling, flower-shaped and orphaned ice cubes hovered, and we could choose which twists to take for a walk first. Massive peeking, weighting, test jams in the air and ice began.

Choose a favorite, follow up and yippee, let´s go for the matter. As a creature without any dense ambitions, reluctant to waste the little power that nature has endowed it with, to be stuck to the seventh tooth, I understand myself most often with a light weapon balanced so that it gets stuck almost alone, can be hung in pre-cut holes or well hooked on icicles.

Just the style "You have muscles, I have lines". So if I don't count the Bandits from Singing Rock, which share with me both the apartment and all the expeditions for adventure in the mountains, I vote for the legendary Quarks from Petzl and Vipera from Black Diamond, which are among the favorites of our photographer Jakub Cejpek and became my favorites too:)

It is already melting in Vír this year, but in a year it will "swell well" again. Thanks for the great background of the Ice Wall! 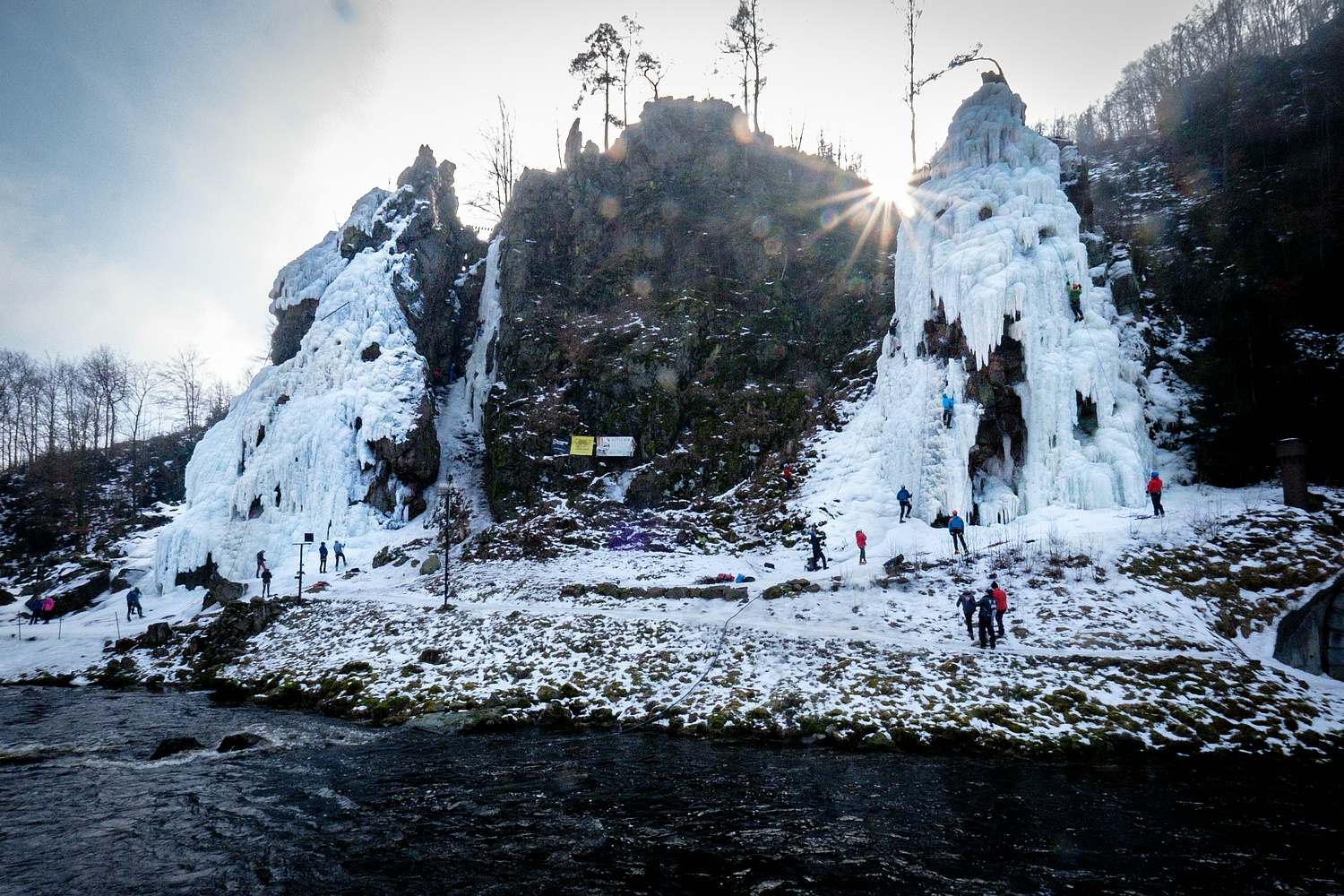