Rannveig Aamodt is, among other things, a professional rock climber from Norway, who got hooked up by climbing at early age. Throughout the years Rannveig developed her skills to the point where one's hobby turns into a carrer, entering elite-level rock climbing world. After a 50-foot ground fall in Turkey that nearly claimed her life in 2012, she's back on the track again sending boulder problems as hard as V8, sport climbs as hard as 5.13c and trad climbs as hard as 5.12. This summer, she returned to a place where it all started: a small country with beautiful mountains and a population less than the city Detroit; Norway.
4. 11. 2015 Comments: 0

Words by Rannveig Aamodt: I grew up among the wild mountains of Romsdal, which is famous for its steep mountains, deep valleys, and spectacular beauty. Romsdal is home to Europe’s tallest vertical rock face – the Troll Wall, at over 3,300 feet high. The area is known as being one of Norway’s best trad climbing destinations but it’s great for all types of rock climbing, bouldering, mountaineering, ski touring and ice climbing. 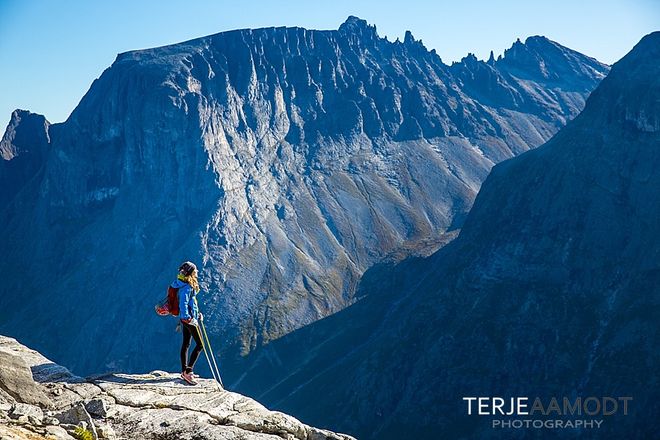 I lived in Romsdal before I moved to Colorado, and the accessibility to the high mountains and the variety of everything from bouldering to big wall climbing all in one area is what I like the most about the region. Of course, it’s also one of the reasons I really like living in Colorado as well.

One of my favorite routes in Romsdal is the northeast wall of Store Trolltind (The Big Troll Pinnacle). It is the highest of the jagged peaks encircling the Troll Wall. On the last part of the route you’re climbing up the Northeast edge, an incredible knifeblade ridge. It’s exposed and it looks really brutal from distance, but once you’re up there it’s mostly fourth classing with a couple of spots of super easy climbing. From the top you can look 3300 feet straight down onto the Troll Wall on one side, and down into a huge glacier on the other side.

At the bottom there is a short video of me and my brother some years back (unfortunately in really bad quality and no sound). Another one of my favorite routes is the south pillar of a mountain called Mongejura. It’s a beautiful 24-pitch trad route that goes up the north side of the valley. It has three pitches of 5.10, and the rest is easier climbing on ledges, fourth classing and pitches up 5.8 and 5.9. 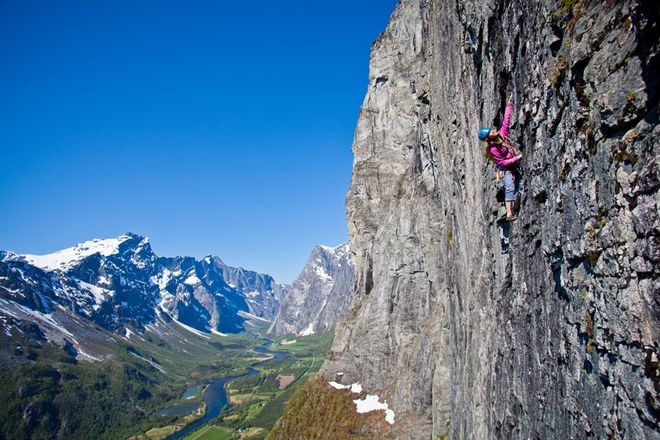 This climb has a special place in me because of its history. I remember as a kid, my older brother (my hero at that point) came back from climbing it. He was pretty new to climbing himself. I was listening to him and his friends tell stories about getting lost and how they had to overnight at one of the ledges up there. I was looking at their beaten up hands, which looked like they had just come back from a battle field.  I could see in their eyes a certain spark, as if they’d seen something that you couldn’t even imagine unless you’d been out there yourself. I later recognized this “glow” in a lot of mountaineers’ and climbers’ eyes. It stays young, however old the person is.

The climbing conditions there can be challenging since the summers are often sieged by wet, Atlantic coastal weather. All the rain and snow melt creates waterfalls cascading down the granite walls on each side of the valley, making the area shine with a bright, lush green when the weather clears. 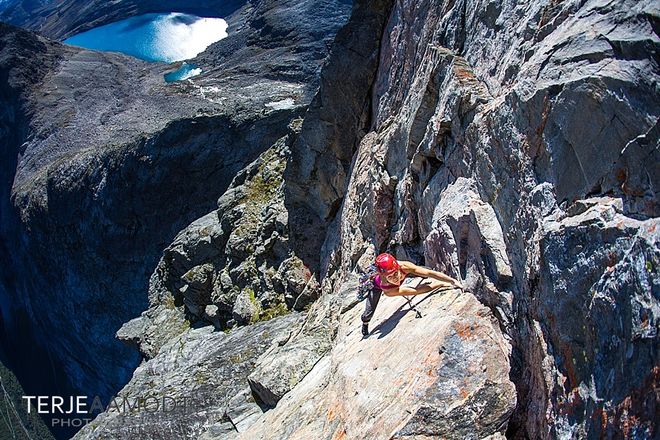 In the winter, the sun only shines a few hours a day. The temperatures can drop to well below zero and the waterfalls freeze into 2000-foot columns of ice, turning the place into a playground for ice climbers. 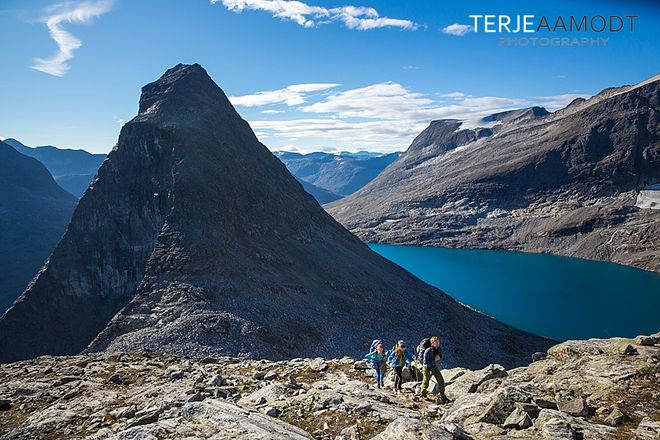 On my last few trips home, I’ve helped my brother with his book project that will be finished by early November this year.  It’s called Romsdal Exposed and will be sort of like the 50 Classics of North America, in that it will have tons of amazing photos, stories and the history of Romsdal as an extreme sport destination. The book will be written in both Norwegian and English and sold online here.