The biggest motorsport show to hit the German capital this year has come to a conclusion, when the FMX pilots of Night of the Jumps battled for valuable championship points in the German Grand Prix of the FIM Freestyle MX World Championships at the Berlin o2 World Arena. And the opening of the 2015 FMX World Championship season could not have been more spectacular; 11 of the world's best freestyle motocross riders offered visitors a hard-fought battle with many trick premieres.
10. 3. 2015 Comments: 0 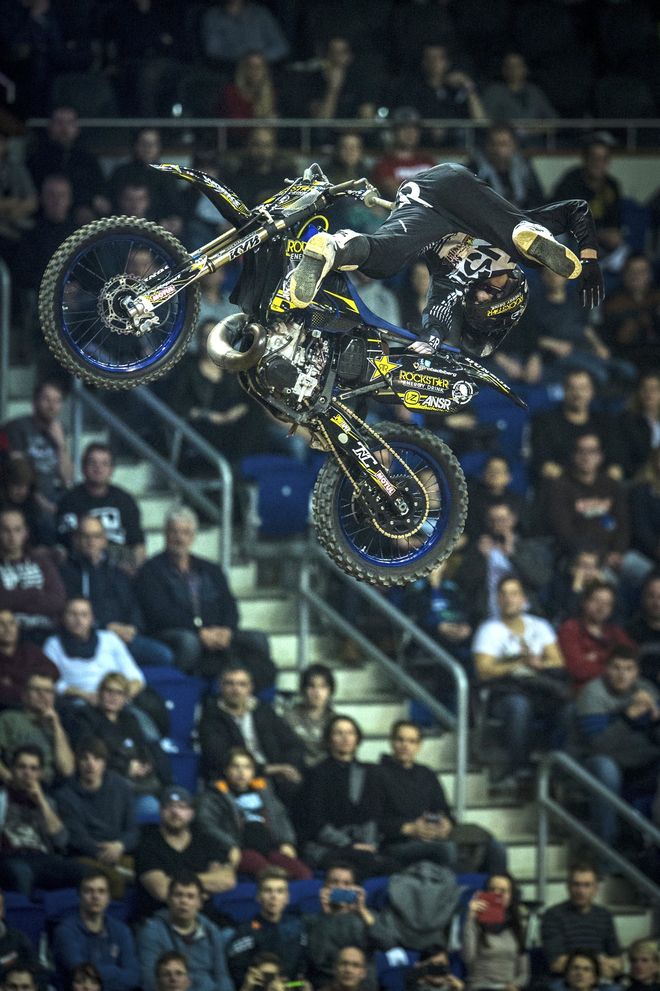 Adelberg landed his first California roll on dirt in competition.

Rinaldo displayed his own version of the Cali Roll and also a clean Double Grab Indy Flip. Unfortunately for Rinaldo this wouldn’t be enough to win, going head to head against the reigning World Champion Maikel Melero who also had a Double Grab backflip, his new side-saddle take-off California Roll and the Flair on the quarter pipe which would count as the best run and give Melero the first round win. And thus the old world champion has catapulted himself into the New Year, and back on top of the championship standings. 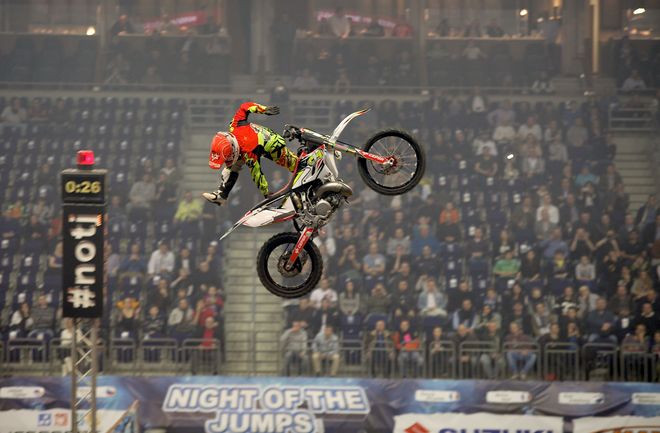 The battle continued the following day, featuring new tricks from each of the riders in the second round of the World Championships, including Petr Pilat’s Dead Body Flip and the California Rolls from Melero, Adelberg and Rinaldo, but the competition exploded when the little Frenchman would try to seize the finale with his Rock Solid Backflip (a back flip in which the rider lets go of the bike completely, upside-down). 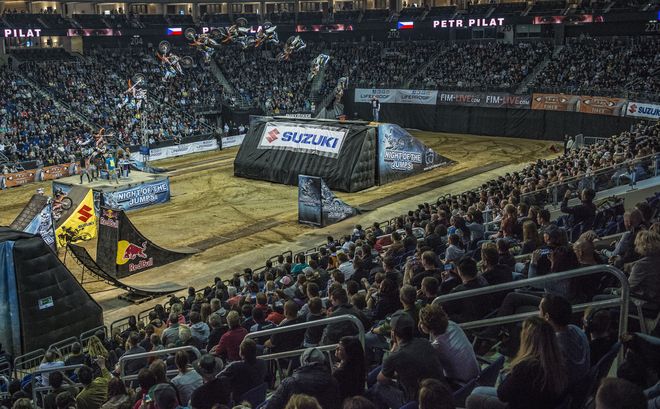 This trick has currently only been performed by three riders in the world, and is regarded as one of the toughest and most technical tricks and this time was premiered on a Night of the Jumps course.  Despite the insanity of this trick, it would not be enough for Rinaldo to win this round. The winning run would come from the reigning 2014 World Champion, Melero, with his 540/Flair, Double Grab Flip and the new side-saddle take-off to California Roll or ‘Melero Roll’, completing this new body varial with a No Hand Landing. 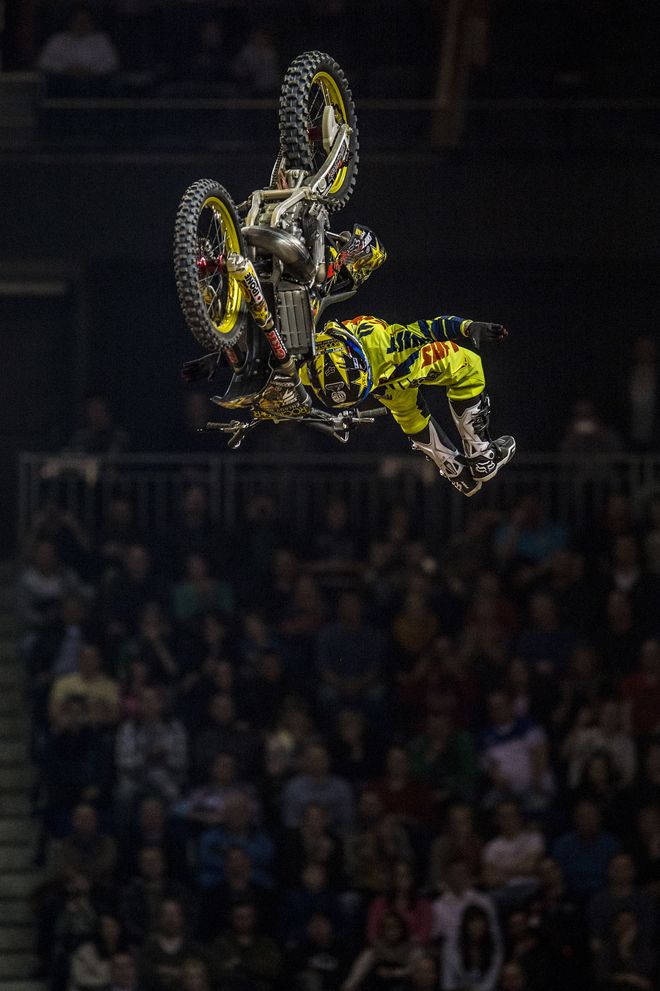 With the full 40 points haul from the first 2 rounds, the reigning World Champion is also beginning the season with top points on the standings.  Maikel Melero is in charge of the overall title fight and he will be hard to beat in with this current form. However the 10,000 spectators at the o2 World could also cheer for their local heroes, with the young German rider, Luc Ackermann making it into the Finals.  The 17 year old also improved on his finals results by winning one of the most spectacular Best Whip contests in Night of the Jumps history to win the LifeProof trophy and retaliated in his battle with the 18 year old Czech rider, Filip Podmol who defeated him in the earlier 2015 round at Graz. If that wasn’t enough for the German crowd, Ackermann would then secure another victory with the home-town Berliner, Kai Haase in the Synchro contest.  From then on, the crowd erupted and celebrated with the two Germans to loud applause and Mexican-waves.  For Kai Haase, he was so close to securing another victory of his own in the Maxxis Highest Air competition, however it was the Italian Champion, Massimo Bianconcini who would snatch victory.  Kai Haase almost had the 2nd round title at 9.00 metres, but Bianconcini regained control when he narrowly cleared the height of 9.50 metres to win again.  This extends Massimo’s Maxxis Highest Air lead in the annual ranking with a double victory. 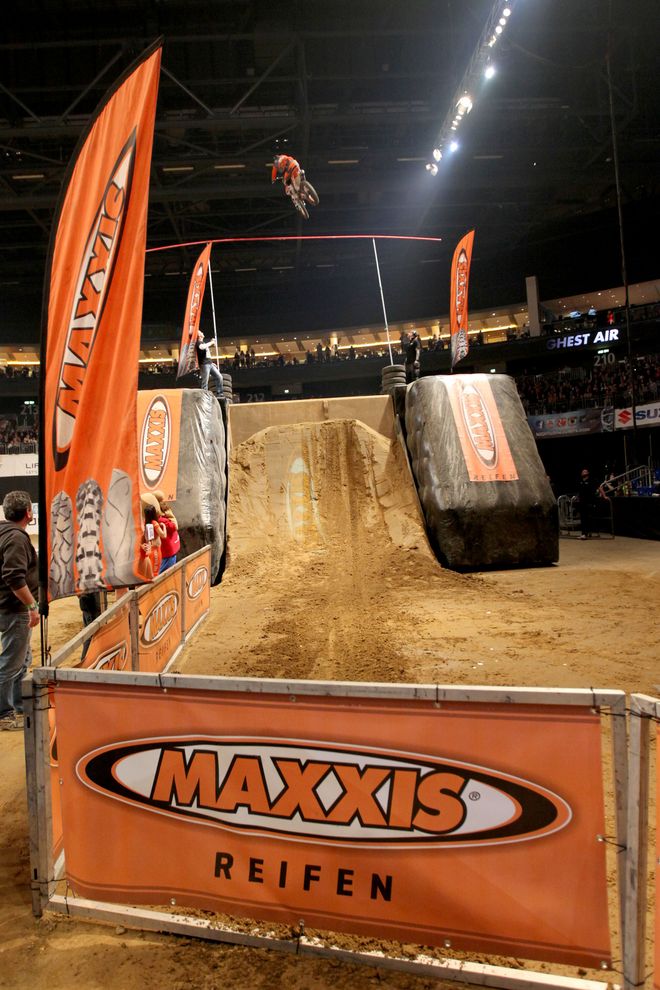 In exactly two weeks, the world’s best FMX athletes will converge on Krakow in Poland for the next two World Championship rounds and compete for valuable points for the overall crown.