Just outside of Swakopmund lies one of the best drop-zones in the world. If you have ever experienced desert skydiving, you know that nothing beats the view over an expanse of desert and sand dunes. It's an unique experience in every way and you kinda feel like freefalling towards another planet. One of such places, the Namib Desert, is made even more beautiful; being adjacent to the Atlantic Ocean and the bleak but stunning Skeleton coast, this world's oldest desert is where the sun, wind and sky harmonize together. And right here, in 1997, a group of enthusiastic parachutists formed a skydiving club.
16. 3. 2016 Comments: 0

Swakopmund is Namibia's largest coastal town and is a huge draw for tourists. Facing the Atlantic Ocean, the coast is the main lure; palm-lined streets, seaside promenades, sandy beaches. But adrenaline seekers soon found out that the desert is where it's at. Quad biking, dune carting and similar activities have changed the way the tourists had spent their holidays and the town has become the country's leading adrenaline destination. 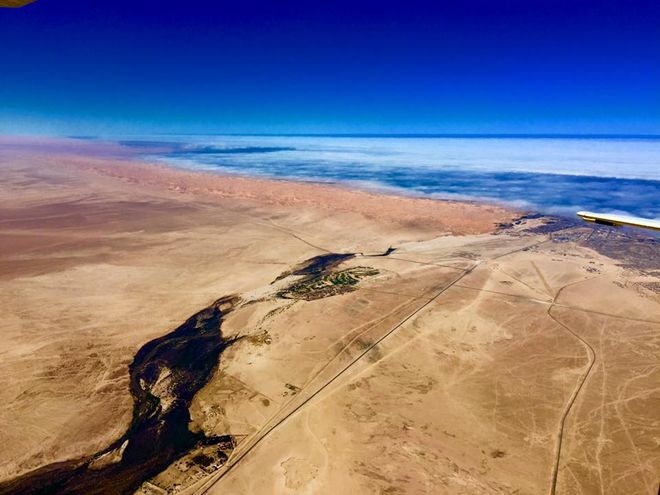 Early mornings and evenings in Swakopmund can be cold throughout the year, as the cold Atlantic Ocean meeting the Namib Desert creates a fog bank. This coolness is often a relief from the heat of the rest of Namibia, but does mean that Swakopmund is not the tropical sunbathing Mecca that most people imagine. Actually, the fog was one of the reason why Ground Rush Adventures (one of the founders of the Swakopmund Skydiving Club) moved their operation away from Swakopmund Airport to their own private airstrip in the Desert. 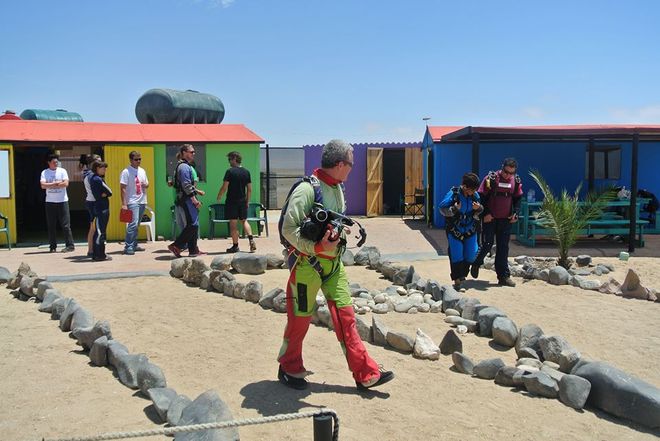 "Our new location ensures that we can run our aircraft back to back without interruption from ATC and this avoids being placed on a holding pattern. Also being located out of the fog line we are always guaranteed to jump any day," says David Botha of Ground Rush Adventures.

Although Ground Rush Adventures might be new to some, they have come a long way since 1997 when it all started, having logged more than 100.000 jumps. Last year, they opened up the Trustco Nambia International Airshow in Windhoek. "Show jumps are always fun.  We opened the first airshow that Namibia has even seen of that size.  We jumped out of Antonov An2 with smoke canisters.  Our formation had to  stack up on each other and fly in a clock wise manner whilst the Good year Eagles team circled in a counter clocks wise manner around the skydivers. There were roughly 15000 visitors to the airshow," David describes. As far as the current team is concerned, Ground Rush still have had the same staff that started the company 19 years ago and the 'family-like' approach is felt right away. And they seem to be cool bunch too. When you come to the dropzone, one of the first things you will probably notice is the leopard paint on one of their airplanes.  "We purchased the aircraft from a lodge in Namibia, they used it for clients transfers' and  they had painted it that way.  We just happen to keep it like that because it looks cool. But we have three aircraft in total.  All Cessna 206’s," explains David. "We are also busy working on getting a turbine (Atlas Angel) later in the year," he continues. 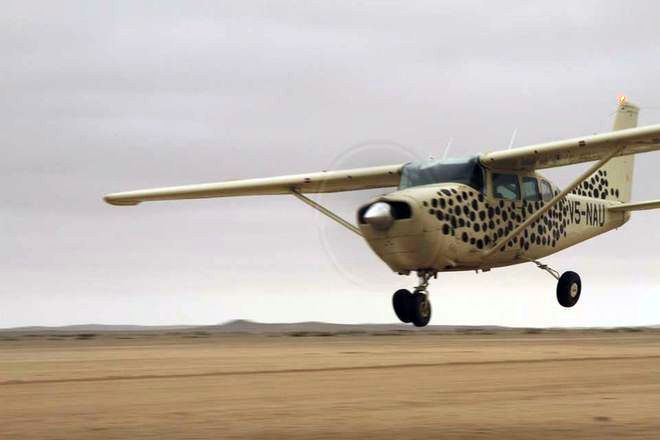 "We had this competition in conjunction with a radio station where you could write to us, why you think your mother in law deserved to be thrown out of an aircraft" Ground Rush  flies generally to 10.000 feet and although you can get up to the same altitude quicker then 25-30 minutes at other dropzones is not, by any means, to the disadvantage here. The aerial view of Swakopmund's surrounding- areas offer some spectacular eye-balling. Apart from the fleet, Ground Rush own five busses that they use as courtesy vehicles to transfer clients to and from the dropzone. The current team consist of several employees: 5 Qualified Tandem Instructors, 5 Camera Flyers, 4 AFF instructors, 5 Static line Instructors, Editors, Packers, office staff and drivers. It's a big family. 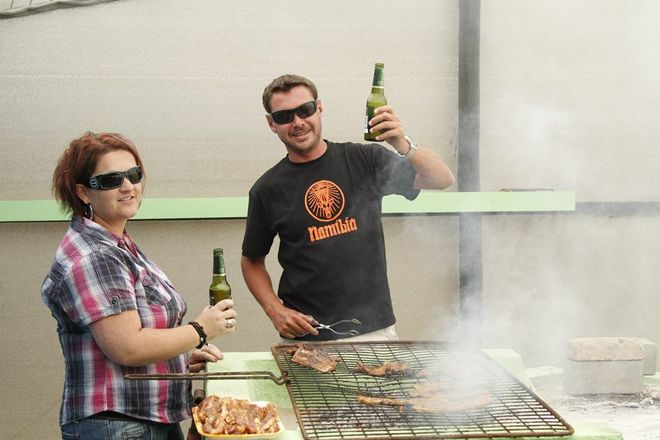 Loads of history, the all famous "Desert Boogie", a magic bell that rings Jagermeister on the counter of the DZ's bar. David remembers it all. But those days are gone. What happened? "The Desert Boogie is still run by the skydiving club,  we used to be part of it and it was much larger than now. It has lost numbers in recent years," David recalls.  "We as Ground Rush are to run a future boogie similar to what we used to run in the old days. Larger aircraft etc.," he continues. It looks like the scene saw better days but still, due to people like David and the rest of the team local skydiving has still plenty to offer and there is a lot of fun to be had. "We run monthly competitions where we give someone the opportunity to go for a tandem skydive or to do a static line training. Last year we had a few different competitions; you had to send in an extreme photo and the ones with the most likes won the prize.  We had also a competition in conjunction with a radio station where you could write to us, why you think your mother in law deserved to be thrown out of an aircraft.  There is always something fun lying ahead with regards to competitions.  But we are mostly a tandem operation and we do on average about 500 tandems a month," David says. Apart from tandem jumps, Ground Rush run AFP courses as well as Static Line jumps. Classroom training for AFF & Static line is about 8 hours before you start with your first jump.  David likes to get people qualified and not just let them do one jump so if you are thinking about getting your coursed done, you might be asked to stay for 2 weeks minimum. 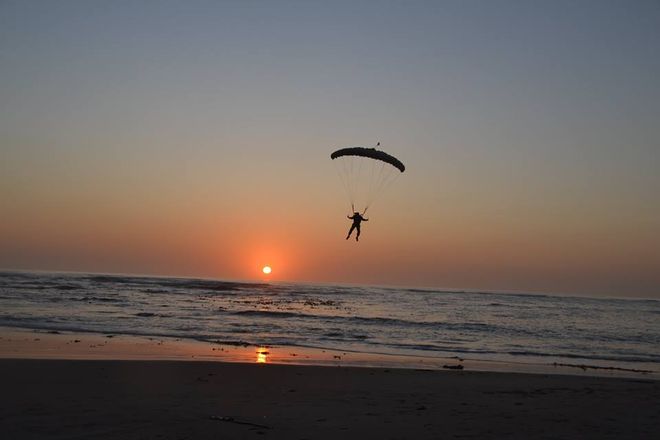 The dropzone is opened all year round, jumps are offered everyday (from 10 in the morning till sunset, depending on how many jumps there are manifested). Apart from regular jumps the crew run Tandem Susnset Jumps where you land on the beach at the local beach bar Tiger Reef.  This is very popular but also very weather dependant. Nevertheless, it's worth to postpone it in case weather turns bad; the opportunity to land on the beach and enjoy a cold beer at the end of a perfect day is priceless.