Darci Liu - or Liu Dan in Chinese - is China's first "Pro" surfer and represents a growing movement of Chinese surfers embracing the sport in the warm waters surrounding Hainan Island in the South China Sea. With an infectious personality she has emerged as an ambassador for the sport of surfing in China. She actively sets an example for the next generation of surfers - young and old - who learn directly from her lessons (she’s a surfing instructor) and from watching her maneuver gracefully through the often stormy waves that pound Hainan's coastline during the typhoon season.
16. 8. 2013 Comments: 0
Born nearly 600 miles from the nearest ocean in the rural mining and farming town of Enshi, Darci grew up studying ballet in an arts academy in Wuhan until the age of 18.  Her training as a ballerina instilled  her with a style and grace of movement that is evident in her approach to surfing. Despite only learning to swim at the age of 18 in a swimming pool in Guangzhou, she has embraced a fearless attitude towards facing new challenges in the water - just as she did when learning new vaults and acrobatics in dance school.
Darci was invited as a Wild Card participant in the Swatch Girls Pro at Wanning for both the 2011 and 2012 events, and has competed annually in the Surfing Hainan Open, though she plans to expand her experience in 2013 with trips to the Philippines, Taiwan, and France.

• Runs a surf-school on the beach in Sanya, Hainan Island
• Volunteers, organizes fundraisers, and sponsors days at the beach for TheBrightConnection.org -  a local charity for disabled orphans.
• Enjoys designing fliers, jewelry, and clothing for her surf-themed bar/cafe. 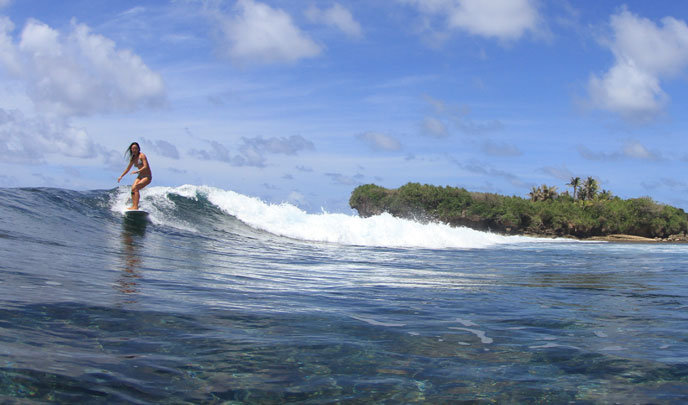 Anyone who meets Darci for the first time is instantly mesmerized by her positive, energetic personality, a trait that makes her an ideal person to help introduce surfing to her native country.

Her years of disciplined training as a ballerina give her a focus and deter-mination in and out of the water that propels her to continuously improve her skills and conquer new challenges, while at the same time providing a sterling example of the 'aloha' spirit for a nation where interest in surfing is still in its infancy.