The origins of surfing

Surfing is one of the oldest practiced sports on the planet. The art of wave riding, is a blend of total athleticism and the comprehension of the beauty and power of nature. Surfing is also one of the few sports that creates its own culture and lifestyle.
22. 6. 2013 Comments: 0

The act of riding waves with a wooden board originated in Western Polynesia over three thousand years ago. The first surfers were fishermen who discovered riding waves as an efficient method of getting to shore with their catch . Eventually catching waves developed from being part of everyday work to being a pastime. This change revolutionized surfing.

There is no exact record of when stand-up surfing became a sport. It is known that during the 15th century, kings, queens and people of the Sandwich Isles were big into the sport of "he'enalu" or wave-sliding, in old Hawaiian,. "He'e" means to change from a solid form to a liquid form and "nalu" refers to the surfing motion of a wave.

Early historical records of surfing appear in the late 1700s, when Europeans and Polynesians made first contact in Tahiti. Navigator Captain James Cook described how a Tahitian caught waves with his outrigger canoe just for the fun of it: "On walking one day about Matavai Point, where our tents were erected, I saw a man paddling in a small canoe so quickly and looking about him with such eagerness of each side. He then sat motionless and was carried along at the same swift rate as the wave, till it landed him upon the beach. Then he started out, emptied his canoe, and went in search of another swell. I could not help concluding that this man felt the most supreme pleasure while he was driven on so fast and so smoothly by the sea."

The first Polynesian settlers to land in Hawaii were most likely skilled in simple surfing, and after a few hundred years of riding the waves of Hawaii, the well-known Hawaiian form of the sport emerged.

The Hawaiians who surfed, the ali'i or high class, claimed the highest reputation for skill with boards on waves. They developed their own prayers, board shapers, wood and beaches where a select few could surf with people of their talent. No one dared to drop in on their wave in fear of getting punished and possible dying. The surfboards underwent a sacred ritual before construction. Only three types of trees were picked to make a board. The board maker would dig up the tree and around the roots place fish in the hole as an offering to the gods for the tree. The process of shaping then began. 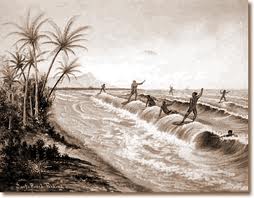 There were four basic board types used in ancient Hawaii :
- The paipo or kioe, a body board, from 2-to-4 feet long, usually used by children.
- The alaia (ah-LAI-ah) or omo (O-mo), a mid-sized board, about 8 feet or longer.
- The kiko`o, larger than the alaia, but not as big as the biggest boards; between 12 and 18 feet; good for bigger surf, but requiring a high level of skill to handle.
- The olo (O-lo), a very long surfboard reserved for royalty that could be as long as 18-to-24 feet in length.